One of the highly enjoyable by-products of Netflix is the ability to create customized lists which serve as suggestions for DVD titles. I've spent hours combing through some of these lists from fellow subscribers- sometimes to find movies I want to watch, but more often than not in complete awe of the creativity and wit that went into the creation of them. Where else could you find 15 movies described as "The best of Alan Alda" or "Independent Classics" that totals 65 films from the likes of "Wanda" to "The Exiles". Point being, each list is a treasure trove. Secondarily, as list-crazy as I am, they serve as excellent ways to categorize my own personal favorites... in which lists such as "police procedural", "films with Texas as a character" and "sunshine noir" currently exist.

The latest list I made (represented by this top 5 list) is a unique sub genre. A few weeks back, I watched "The Odessa File" directed by the workmanlike Ronald Neame. Here was a film starring Jon Voight as a journalist of German descent who becomes entangled in his own personal search for a Nazi war criminal who escaped after World War 2 with the help of a shady organization known as Odessa. Competently executed and continually engrossing, this is a fantastic film that seems to never get any real word of mouth. I started thinking back on a number of 'Nazi hunting' films and remembered each one as just as equally watchable (of course, Tarantino's upcoming adaptation of "Inglorious Bastards", based on an Italian film of the same name will probably explode this genre into the limelight, and rightfully so). So, the top 5 films about Nazi hunting. Am I forgetting any? 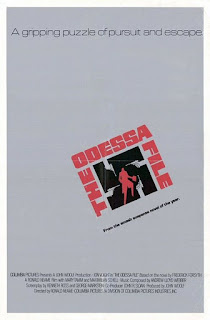 1. The Odessa File - As mentioned above, Neame's film is a tense mixture of social commentary and cold war intrigue. As a German journalist, Voight goes undercover to infiltrate the Odessa group and locate a Nazi war criminal who he read about in a dead Jewish man's diary. All types of moral and political compromise come into play- the guilt of German people to rationalize the atrocities carried out during the war and Voight's own realization of his family's involvement during the same time. There is one scene, where Voight discovers the location of a fraudulent document maker for the Odessa group, that spans over 20 minutes and is a perfect example of slowly escalating tension within a set piece. 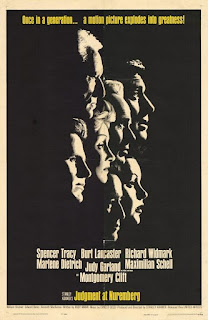 2. Judgement At Nuremberg- While many films on this list take a fictional re-telling and spruce it up in grand Hollywood fashion, Stanley Kramer's star studded visualization of the war trials plays everything close to the truth. Sure, there are big name actors mugging it up on the screen, but "Judgement At Nuremberg" has its heart in the right place and there are some genuinely moving moments. Part courtroom drama and part confessional, it remains a film that tackles a gaping issue with moral responsibility and respect. And you know, Maximillian Schell made a living acting in these Nazi hunting films. I count three on this list. 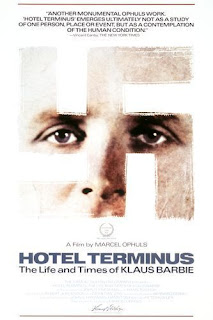 3. Hotel Terminus, The Life and Times of Klaus Barbie- A slightly different take on the sub genre but no less involving. Max Ophuls' sprawling tapestry (over 4 hours) of Nazi SS soldier Klaus Barbie, his life, work and now peaceful existence in South America should be required viewing for anyone wanting a deep sense of the murky reasons for complicity during the second World War. Ophuls doesn't identify or destroy the man, but through years of spliced footage and personal interviews, it becomes almost impossible to reduce anyone to a simple explanation. Like a majority of the Nazi war criminals who escaped Germany, they ended up in Bolivia or Argentina, which is where Barbie is eventually discovered. "Hotel Terminus" gives a factual slant to the fictional ideas. It should go well as counter-programming to the other films on this list. 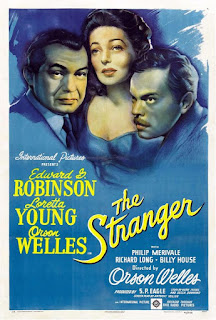 4. The Stranger- Orson Welles' third film as a director finds him disguised as a former Nazi working as a teacher in a small Connecticut town with Edward Robinson hot on his tail. Filmed in 1946 way before the genre became fashionable, "The Stranger" is, remarkably, often tagged as Welles' worst effort. Some of the dialogue is stilted, but its still a deceptively intriguing film with some highly memorable moments such as an impalement on top of a clock tower. 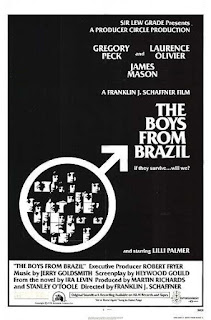 5. The Boys From Brazil- The most out there film on the list, this late 70's film charts the discovery of an ex Nazi scientist (Gregory Peck) who intends to clone small children with the DNA of former Nazi generals and start his own army! Laurence Olivier has the duty of tracking down the group. Seriously, I smile a little even when I write it, yet Franklin Schnaffer's film belongs on this list simply because it is so outlandish. Beneath the quirky science-fiction aspect, "The Boys From Brzail" is a total guilty pleasure that takes the Nazi hunting sun genre to delirious new heights. It is readily available on DVD and TCM, so check it out if you ever get the chance. You won't be disappointed.

Thanks for the recommendations! What about "Notorious"?!?!

Ahh, great suggestion! Just a simple oversight on my part.

in this subject other movies u may like are...

walk on the water,

plz anybody upload more if u know more movies abt nazi hunting or nazi war criminal movies or after war nazi movies.....plz

Flame and Citron (Dutch resistance, a beautiful telling of the steely nazi and collaborator hunters)