Filmmaker Christian Petzold's cinema has always been a female-centric one. Portraying strong women in various modes of genre, his muse, actress Nina Hoss, has embodied women in various stages of distress with fierce resolution- revenge in "Something To Remind Me" or corporate 'chameleonism' in "Yella" or especially meal-ticket survival of the fittest-cum-emotional-smackdown in "Phoenix". Whatever the parameters, Petzold's films may not fit perfectly into the MeToo movement of total acceptance (precisely because, after all, he is still a male director parlaying these feminine narratives), but at least he tries to assuage something other than the usual point of view in a cinematic world where most male characters weigh heavily.

This predilection is obvious from the opening scene of his debut TV movie, "Pilotinnen", also known in English as "Drifters". Two sets of hands embrace each other in close-up against the wood-grain top of a restaurant table as voices (obviously lovers) make their plans to meet in a hotel in the very near future outside of Germany. Petzold then cuts to Karin (Eleonore Weisgerber) and then follows her outside, never even showing the male character whom she's established a rendezvous with. We soon learn, obliquely as Petzold loves to drip information about his characters slowly, that Karin is a traveling saleslady for a cosmetic company, virtually homeless except for the bonuses she earns on hotel rooms through her company's weekly overnight stays. She's not presented as a desperate person. On the contrary, Karin is drawn as a succinct and no-nonsense woman who understands the frivolity of her ways and has accepted things.

Her life isn't made any easier, however, when her boss (Udo Schenk) finds her sleeping in her car and decides to make her career difficult by assigning her a partner, who happens to be a much younger and attractive blonde (Nadeshda Brennicke). And she's having an affair with said boss. From there,"Drifters" establishes a very "Thelma and Louise" vibe as Karin and Sophie bond over their repressive state in both the corporate and emotional world, deciding to take matters into their own hands. 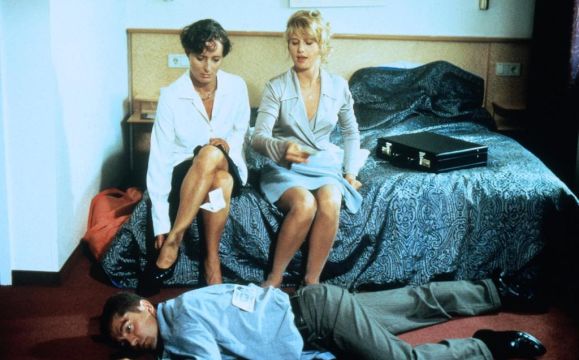 Being a TV movie, the sex and violence is especially pared down, but Petzold's flair for the subversive remains intact. Karin, endlessly smoking and prone to penetrating glances that would weaken the knees of both men and women, is the classic archetype for all of Petzold's later incarnations. She seems to be a woman who understands and knows what she wants, even if young and seemingly flighty Sophie gets the big, sweeping gesture of personal sacrifice that navigates the final act of "Drifters" into something surprising and fatalistic.

From this effort, Petzold was given the opportunity to make other TV movies- "The Sex Thief", "Cuba Libra" and the best being "Something To Remind Me". As a first feature, it's rough in certain parts and maintains the restrictive boxy format, but in ideas and larger themes taking shape in a rising auteur, it's a wonderful glimpse into the formative process of a burgeoning talent.
Posted by Joe Baker No comments:

Labels: christian petzold, Not On DVD

Eugene Jarecki's "The King" is a progressive and invigorating rolling roadshow of the halls and faces of America. Oh, and its about Elvis, too. Driving his now infamous Rolls Royce car from his birth place in Mississippi to his final days in Las Vegas, Jarecki has much more on his mind than celebrity-icon-mythmaking-enshrinment, opening the film up to become a leftist meditation on the decline of America. Utilizing interviews from musicians, actors and normal everyday folk just striving to survive, "The King" mixes these verbal cues with found footage and movie clips of Elvis to fashion a perfect film for our truly screwed up times. Hearing Ethan Hawke tell stories about Colonel Tom Parker's iron-fisted control of Elvis or seeing John Hiatt become emotional in the backseat because he can feel how "trapped" Elvis was are powerful moments, but Jarecki makes sure to overshadow these louder tales by focusing on the anonymous and common faces of the people he picks up hitchhiking or who wonder aloud why our country has left them so far behind. It's an amazing feat. I'd venture to call Jarecki the closest thing we have to 'outlaw documentarians' like Travis Wilkerson, Adam Curtis and Bill Morrison.


Don't Worry, He Won't Get Far On Foot

Gus Van Sant's adaptation of John Callahan's memoir about his struggle with alcoholism and subsequent disability is just as morose as it sounds. Tough subject matter, of course, but it's also a film full of inspired performances, especially Joaquin Phoenix as Callahan and Jonah Hill as the AA mentor who helps lift the cartoonist from his self pity and depression. Also giving a stellar performance is Jack Black. Beginning as someone just as over-the-top and loud as Black's usual on-screen persona, the later meeting between him and Phoenix is an emotional stunner, emphasizing what's unsaid rather than said. Van Sant films the entire affair in a no frills fashion, understanding and accepting that the performances are what raise the film above standard Lifetime Channel mediocrity. If there's one fault, its that the female performance of Rooney Mara as Callahan's girlfriend feels clipped and undercooked, as if its a boys club matter and nothing else.

There are no grandstanding moments. There are very few revelatory plot twists. Even a suicide attempt is kept off-screen, choosing to show a blindingly pristine white bathroom sink and tile stained with pools of blood as the post-visual proof to an extreme act of apathy. All of this is why "The Miseducation of Cameron Post" is an important film and a staggering continuation for a filmmaker like Akhavan who chooses to reveal things via subtle moments and strong character development rather than loud, sweeping arches. Full review at Dallas Film Now

I'm surprised by everyone's coronation of Christopher McQuarrie staging some pretty phenomenal action set pieces. Has no one seen "The Way of the Gun" which is pretty much one of the best action films of the last 30 years? Anyway, this latest installment is pretty good, especially in Dolby IMAX.