Compact and atmospheric, Osgood Perkins' "Gretel and Hansel" is remarkable for the way it chokes subdued themes out of the classic fairy tale. Instead of a cautionary beware-of-strangers theme that the original story so fluently embedded in wide-eyed children, Perkins throws in unsettling motifs about budding femininity and personal sacrifice. A Gretel, Sophia Lillis is exceptional.... and make no mistake, as the inverted title belies, this is her tale as she struggles to make sense of the moody world collapsing around her as she and her brother find solace in the cabin of a spooky old woman and her never ending feasts. It's not so much how the story evolves as how Perkins plays with our expectations, inching along in streaks of eerie pathos rather than outright scares. It may not be for every horror affectionado, but it's just the right amount of calculated dread for my tastes.

Portrait of a Lady on Fire


Magnificent acting and a natural approach to every relationship developed in this tender French drama, "Portrait of a Lady on Fire" deserves the accolades its been garnering since premiering at Cannes last May. Working through a spare narrative- an artist (Noemie Merlant) is hired to surreptitiously paint the portrait of a to-be engaged young woman (Adele Haenel) on a windswept coastline- Celine Sciamma's film becomes a masterpiece of self discovery as the women form a delicate relationship. Although furtive glances and pregnant silences are the de rigueur images for this type of dramatic unrequited love tale, "Portrait of a Lady on Fire" deploys them to breathtaking efficiency where the act of seeing and being seen cuts straight into your heart.
Posted by Joe Baker 1 comment: 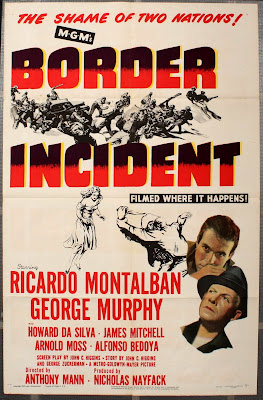 Like many of his contemporaries, director Anthony Mann's filmography swept across the decades of Hollywood's evolution from the dramas of the 30's, the bleak film noir of the 40's and finally ascending to the heights of big budget spectacles of the late 50's and early 60's. Just looking at the titles that dot his resume (from hard-nosed classics like "T-Men" and "Winchester '73" to the pomp and circumstance of "El Cid"), Mann undulated with the times like the best of them.

Unfortunately, I feel woefully inept at accurately responding to the breadth of his films as I've seen so few. I'm pretty damn sure I've seen "Raw Deal", "T-Men" and his western forays with Jimmy Stewart, "Winchester '73" and "The Naked Spur" on TCM or Bravo TV showings back in the day, although I don't have firm documentation in the likes of Netflix markings or Letterboxd notes... which seems to suggest that, nowadays, if this technology isn't checked, the past might not even exist.

All of this is to say I've set out to right this wrong, and if my first jab at Mann's content is any indication, I'm in for a vibrant viewing experience. Released in 1949 and starring Ricardo Montalban and George Murphy, "Border Incident" posits a spy thriller framework over the liberal minded expose of exploitative immigrant culture and the deep-seated (and deep pocketed) conspiracy that aims to use and dispose of them when the work is finished. As two police officers on opposite sides of the border seeking to end the cycle of violence, Montalban and Murphy go undercover- Montalban as a migrant worker desperate to cross the US border and find work and Murphy as one of the middlemen stealing documents to cover the tracks of those in charge.

Full of deep focus rack shots and sinewy midnight lighting- urgent because most of the film takes place in the wee hours of the night where malice and discretion are apt bedfellows- "Border Incident" parlays both the best of film noir and subterfuge thrillers in the way it establishes strong tension around believable characters stuck in-between the (at one point literal) grinding wheels of evil. In fact, although Montalban is the real star, lengthy portions of the film dart away from both he and Murphy, giving weight to the parasitic nature of the shadowy organizations in gritty detail. The forces of evil are embedded in the canyon border landscape so deeply that when one character thinks he's gotten away to safety, he runs straight into the warm den of a woman who promptly calls her husband.... and he arrives with shotgun in hand to clean up the mess for his superiors. No one said cleaning up the border would be easy.

Made right before his run of noirs would be over and he'd embark on a series of westerns throughout the 50's, Mann's "Border Incident" feels especially dark, full of heroic compromise and real-world nihilism that cancel each other out. It's also quite the prescient film. If not for a somewhat tacked-on voice over that closes the film with a hint of optimism, "Border Incident" could be released today and we'd all nod and agree that the problem is as divisive and violent as ever.
Posted by Joe Baker 1 comment: