1. The Monuments Men (2014)- Clooney's World War 2 drama tackles one of my very favorite subjects, that of the Nazi's stolen art hustle out of the various European countries they occupied during the war. And, seriously, if anyone is more interested on the subject as the non-fiction fucking tragedy it was, check out the absolutely essential film The Rape of Europa. Still, "The Monuments Men" is a bit jazzy and Hollywoodized, but its still an admirable effort that manages to balance its tough subject with some genuine sentimentality. And Bill Murray is not getting nearly the pub he deserves for his supporting role. A really good film.

2. Barriers (1965)- One of Jerzy Skolimowski's first films, "Barriers" is a near incomprehensible art film that, I'm sure, would make a bit more sense if I had a grounded understanding of Polish government and literature during the radical 60's. It's visually inventive, just a bit of a chore to get through in that student film sort of way.

3. The Spectacular Now (2013)- This film's reputation of being a clear-eyed, well developed teen romance hits on all cylinders, eschewing the normal routines of the genre to focus instead on the disappointments and confusions of being a teenager. As Sutter and Aimee, Miles Teller and Shailene Woodley are magnetic together, none more so than when they travel to meet Sutter's abandoning father (Kyle Chandler) and the frustrations of adult life hit them smack between the eyes.

4. Rolling Family (2004)- Argentinian filmmaker  Pablo Trapero has been a quiet favorite of mine for several years now after seeing "Lion's Den" and "Carancho".... two wildy different and exceptional efforts. This earlier film of his is much lighter on the surface, but just as relevant about the dynamics between people. When grandmother Emilia (Graciana Chironi) gets an invitation to her sister's wedding, she embarks with her family in on an RV road trip. It complicates matters that one son has had an affair with his brother's wife, teenager cousins are working through confused feelings of love and one daughter has a biker boyfriend in tow. Then there are the many troubles with the broken down RV itself. Trapero weaves all of this soap-opera drama together into a believable tapestry of one hellish road trip. And the final image of Emilia not only sums up the trip, but probably life itself.

5. Robocop (2014)- The basic question is... why? Verhoeven's violent masterpiece doesn't need a remake, much less a toothless, CGI-driven remake. Instead we get Sam Jackson hamming it up, a few toss-away one liners to appease us oldies, and  the very bland Joel Kinneman as the titular cop. Just pointless.

6. Static (1985)- Yes, I rallied about this in one of my Not on DVD posts a few years back and found a copy. God bless you Internet. Mark Romanek's debut feature is thoughtful and surprising in the way it shifts gears in tone and idea.... one minute its a bit of a goofy 80's comedy and the next its a devastating critique of the human psyche and our search to understand the impossible. Actor/director Keith Gordon (remember him!) stars as an unemployed man who believes he's created a device that allows everyone to see heaven. After the disdain of his family and girlfriend (Amanda Plummer) sets in, he tries to get attention through drastic and surprising measures. This one is out there and on ratty VHS copies and it deserves some renewed attention.

7. Empire State (2012)- I suppose I've lost faith in filmmaker Dito Montiel. After his lightning burst of a film, "A Guide To Recognizing Your Saints", had me proclaiming him as the next heir apparent to Scorsese, he's rattled off three or four pretty lackluster efforts. "Empire State" is another. When Liam Hemsworth and buddy decide to knock off the bank vault he works for, it not only gives them lots of chances to swear in a New York voice, but it brings cop Dwayne Johnson sniffing around. Montiel's ideas of tight family sacrifice and the macho bond between guys is there, but it all lacks real depth, voice and sense of direction.

8. Marquid de Sade's Prosperities of Vice (1988)- My first exposure to Japanese provocateur and experimental filmmaker Akio Jissoji is this visually spellbinding tale of de Sade's theater of the real, featuring plenty of baroque dialogue and soft core nudity. Beyond that, its a bore.

9. About Elly (2009)- Asghar Farhadi's last film before hitting international success with "A Separation" tells the story of a group of friends who vacation on a beach only to have their female friend disappear. Echoes of Antonioni are obvious, but its the deeper contradictions that come into play as the remaining friends squabble and rationalize. When the truth does come to light, in typical Farhadi fashion, the truth is much more resonant and destructive than anyone could imagine. While not his best film, "About Elly" shows Farhadi fully developed into the domestic-thriller master role he now occupies. My only complaint- the tremendously horrible subtitles that accompanied my copy.

10. Her (2014)- Perhaps it was the high expectations surrounding this one, but its whispy romance never took off for me.
Posted by Joe Baker No comments:

An Evening With Crispin Hellion Glover 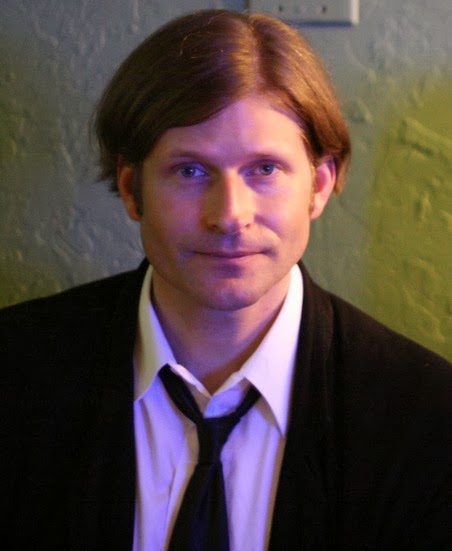 Actor/director Crispin Glover has been called many things- some flattering and many not so flattering. The head-scratching has only become louder in recent years with the release of two experimental art films that choose to have actors with disabilities play leading roles. "What Is It?" utilizes people with down syndrome to tell its story and "It Is Fine. Everything Is Fine!" was written and stars Steve Stewart, a man confined to a wheelchair with cerebral palsy. Watching both films is a feat of tolerance, especially "What Is It?' since its main themes rally against the corporate propagandist that Glover so fiercely believes has infiltrated modern Hollywood. Like other surrealist artists (Bunuel the filmmaker most frequently  referenced), Glover says he wanted to challenge the viewer's expectations and have us ask ourselves probing questions. "What Is It?? certainly does that. But the better of the two films is "It Is Fine Everything Is Fine!". Filmed like a 70's TV murder mystery with a bit of Fassbinder for seasoning- especially in its casting of Fassbinder starlet Margit Carstensen and the film's penchant for garish lighting and highly artificial sets- "It Is Fine Everything Is Fine!" stars scriptwriter Stewart as the aforementioned wheelchair bound man with a unique obsession for women with long hair. And beautiful women seem to be throwing themselves at him, in which he proceeds to strangle and kill them. Beyond this straight forward synopsis, there's something heartbreaking and melancholic about Stewart's flights of fancy and the ideas of body constraint. "What Is It?", the first film in a proposed trilogy, also challenges the viewer with questions of authenticity about our relation to the visual image. Should we laugh? Should we be repulsed... especially in its imagery of repeated snails and Nazi symbolism. Yet there's a unique, experimental energy running through both films that supersede their obviously provocative statures.

All of this is made even more clear by Glover himself, an artist who not only shows both films on his current tour of art houses, repertory theaters (like the great Historic Texas Theater where I saw him) and museums, but performs his unique slide show reading and then stays for a Q and A session. Both nights I saw him, Glover spent almost 4 and a half hours in total answering every question thrown his way... extremely ingratiating and welcoming... a bit rambling at times, but incredibly well meaning and honest. As one person asked, "what is it about his persona...a man who never plays it safe... that attracts generations of people to him?" After this two night event and his deep explanations covering everything from his early days of acting to the personal sacrifices he's made in bringing these films to audiences, Glover is even more so a man who never plays it safe. Which makes us like him even more.
Posted by Joe Baker No comments:

The Paolo Sorrentino Files: This Must Be the Place

Alot of the malaise towards Paolo Sorrentino's 2011 film "This Must Be the Place" lay at the feet of Sean Penn in the starring role of Cheyenne.... a soft-spoken, almost child like ex-rock star who never quite outgrew the Robert Smith 1980's. It's such an offbeat, downright weird incarnation that a lot of people couldn't get past the interpretation. While I do admit that it took me a good portion of the film to buy into the character myself, when it finally happened (sometime when his travels take him to New Mexico) I became swept away by the sheer energy and originality of Sorrentino and Penn's vision of a broken man-child trying to alleviate the torments of a father. 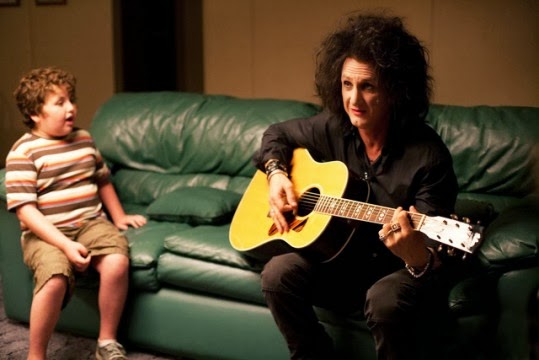 The synopsis of "This Must Be the Place" sounds just as loony as Penn's emo-rocker portrayal. Living an invisible life in Ireland, married to Frances McDormand, Cheyenne (Penn) seems to only have one friend, young goth rock fan Mary (Eve Hewson). Acting like an older brother, there's also the strange relationship with an older woman, traumatized by some past event that Cheyenne might be involved in. Wandering through his life aimlessly, Cheyenne is notified that his father has died in New York. Once back home, we learn Cheyenne is from a wealthy Jewish family and the stories of his father's time, tortured and humiliated, in a Nazi concentration camp come to light. There begins Cheyenne's journey across America to hunt down the supposed Nazi officer, stopping for several surreal experiences along the way that Italian director Sorrentino is so adept at tossing our direction.

One thing is crystal clear after two Sorrentino films.... this is a filmmaker working on a much more ethereal level than others out there right now. After his masterpiece "The Great Beauty" last year, "This Must Be the Place" serves as an appealing appetizer to that great work. Both films feature a roving, imaginative camera that glimpses the sudden beauty of mankind in breathtaking snatches. For example, when Cheyenne finally returns to his wife, played by Frances McDormand, we Sorrentino shows us a brief cut of her dropping a bag of groceries and running across the lawn towards the camera. It's through our intuition that we piece this together as her joyous reunion with her globe-trotting husband. Then there's the magical animal moment in which a bison slowly appears outside the window of Cheyenne... an event that mimics the grand giraffe metaphor in "The Great Beauty". Sorrentino may be accused of many things, but his ability to levitate striking moments of human connection to the small wonders around them is solemnly in his grasp. Even the tense final meeting between son and tormenter is handled in such an original, thought-provoking way that we completely understand the final transformation Cheyenne undergoes. "This Must Be the Place" finds great beauty in the horrors of the past and comes out unscathed and even a bit happy.
Posted by Joe Baker No comments: