A Home Away From Home: John Duigan's "Flirting"

I never attended a boarding school. I never possessed the philosophical angst of young Danny (Noah Taylor). And I certainly never had a girlfriend like Thandie Newton fall for my non philosophical and angst-ridden self. Yet, having admitted all that, John Duigan's "Flirting" still manages to inhabit a space of young adulthood that feels both exaggerated and intimate.... truthful and fitfully novel.... and, above all, aligned with the pitfalls and soaring emotions of a beautifully rendered coming-of-age tale whose moments both big and small feel like a universal framework for us all. 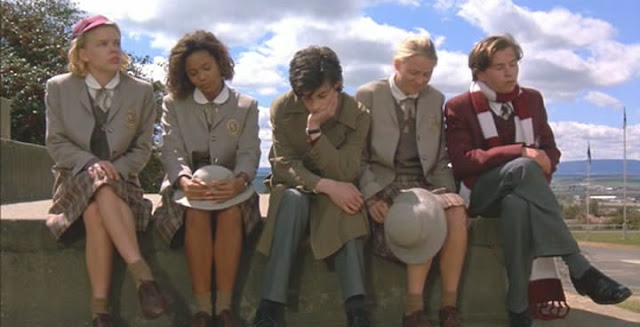 Pairing with young Noah Taylor a few years earlier with "The Year My Voice Broke" (1987), writer and director John Duigan presents their relationship as a sort of American Truffuat/Leaud. In "Flirting", Taylor plays the same character of Danny Embling, a moody and uninterested intellectual at a British boarding school, several years removed from his prepubescent sexual reckoning in that earlier film. Choosing to steer (mostly) clear of the jockish antics of his rugby playing peers, Danny instead buries his nose in a book. The only respite from the boys' daily helpings of testosterone-schoolmate-punishings and fart jokes lies in the queasy relationship of the girls who go to school across the way. Bunched together at chaperoned dances or sporting events, it's one of these anxious social outings that Danny is first noticed by newcomer Thandiwe (Thandie Newton). Their relationship grows slowly, flirting between the ears as opposites of their school's respective debate teams and then eventually as they constantly break the rules and sneak across the small body of water to steal time with each other.

Like most high school coming-of-age films, there are various fumblings, falling-outs and childish gossip that threaten to ruin their romance. An innocent letter sent from Thandiwe to Danny finds the wrong hands at one point, causing ridicule for Danny. The ever-watchful eye of school superiors makes it increasingly difficult for the pair to find time together. And, in a rare feat from a film written by a male, the prerogative gaze slowly shifts onto the women over the boys, creating indelible and curious portraits of young women grappling with many of the same insecurities and fallible thoughts as the young men. Supporting performances by a young Nicole Kidman and Naomi Watts provide just as much intelligence about the sensitive upheavals caused by puberty, never forgetting the fragile existence of either chromosome within the battle of the sexes.

Director Duigan would go onto a strong career of minor gems ("Lawn Dogs" with Sam Rockwell anyone?), but "Flirting" remains his masterpiece. It's a film that-besides launching a number of terrific talents- has the courage and sincerity to tackle such a common subject with varying degrees of complexity. I can't say I've ever drowned myself in the works of Kafka quite like Danny Embling, but I have experienced the acute pangs of a star-crossed relationship, living through letters and second guessing every emotion and decision about said person. All that's left now is for Duigan to continue the lives of Thandiwe and Danny after all these years.
Posted by Joe Baker No comments:


Francis Lawrence's "Red Sparrow" is just the type of spy film we deserve right now. Visually beguiling and arid in its emotions, the film takes no prisoners in the way it frankly dissects the viciousness of empty political vessels using mind and body to wage a cold war. Jennifer Lawrence- using her stardom to spin a female character both sexy and dangerous- is the draw here, but "Red Sparrow" largely succeeds because of its reluctance to play anything safe.... which was evident in the many guffaws and gasps experienced during my mature aged audience expecting a "Hunger Games"- esque escape. After the third of fourth brutal torture scene, all hope was zapped from the theater. I loved it even more, then.


Better-than-average, smartly constructed comedy (thankfully relatively low on the raunch factor), with an engaging cast (especially Rachel McAdams) "Game Night" is also the coming out party for Jessie Plemmons. As soon as an actor like Plemmons gets tapped to play a quirky, unhinged character like the one here, you know he's arrived. Highly self-aware but imbued with an overarching honesty despite its wink-wink humor, "Game Night" excels at most everything it attempts.

Praise must be given for the first two-thirds of Cory Finley's directorial debut "Thoroughbreds" as it maintains a level of formal brilliance and thematic speculation that sincerely keeps the viewer off balance. We watch as two high school friends reconnect after years of unfriendliness- perfectly played by Olivia Cook and Ana Taylor Joy- and hatch a plot that's as nihilistic and psychotic as the feelings pulsing beneath their glassy eyes. When those plot mechanisms kick in, the film loses a bit of its momentum, but "Thoroughbreds" is still a bold and unnerving exploration of the emptiness once exaggerated in so many Bret Easton Ellis novels of the 80's. 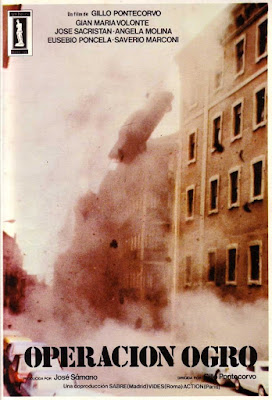 In the latter half of the twentieth century, cinema's attraction to the heroic romanticism and ultimate fatalism of the Wild West outlaw shifted onto the righteous terrorist. Just as committed to their brand of outlaw justice as Billy the Kid, the terrorist also served as the perfect (for better or worse) embodiment of the every-man's indignant right to fight "the man". So, it's no surprise that far left-wing filmmakers like Gillo Pontecorvo (who ascended to international acclaim after his 1966 film "The Battle of Algiers") would make such a film like "Operation Ogre" in which the sole burden of empathy and attention is given to a set of terrorists who meticulously planned and attacked Spanish Prime Minister Luis Blanco in 1973. In fact, their bomb was so potent that it sent the Prime Minister's car up in the air far enough to land on a building the next street over. The fact that "Operation Ogre" isn't just a radicalized political statement or transparent attempt to memorialize such men and women is a feat Pontecorvo pulls off brilliantly. In fact, I'd dare call "Operation Ogre" his best film, even better than "The Battle of Algiers" or the cultish "Burn!" starring Marlon Brando. More of a procedural thriller with some stunning shifts of time than anything else, its such a sad fact this film is rarely available on any home video format.

Starring the always fascinating Gian Marie Volonte as the leader of the Basque revolutionary group who travel to Madrid to assassinate Blanco, the name of the film is derived from the military operation assigned the mission. Of course, nothing goes as planned. Just when the group thinks they have their plan figured out, Blanco is promoted to Prime Minister, which not only alters his daily schedule but includes an influx of new bodyguards. Patiently following Volonte and his group as they audible their own plans, the film soon settles on their doom's-day-ticking-clock attempts to bury a bomb beneath one of the PM's main routes to and from church everyday.

Outside of their tense main mission, Pontecorvo throws in a couple of emotional curveballs, such as the relationship between of one of the terrorists and his wife, including one jarring narrative slip that jumps ahead in time to reveal the diminishing rewards of their violent actions and its repercussions on those who surround them. If nothing else, Pontecorvo routinely understands that the revolutionary life isn't without its mortal sacrifices.

Based on a novel by Julien Aguirre and released just 6 years after the assassination, "Operation Ogre" would be the last feature film directed by Pontecorvo before consuming himself in documentary work. It's a fitting piece. For someone who began his career championing the suspect rule of governments and the violent insurrection possible by its citizens, "Operation Ogre" reveals that his passion for violent change was unwavering.