Daniel Espinosa's "Child 44" is a meandering, gloomy hybrid that successfully merges the murder-mystery thriller against the stifling backdrop of Stalin's early 1950's regime... a period in time where individual thought, personal expression and cultural shifts of the West were contained and punished behind a frightening curtain of fascist control. Even the idea of murder- considered a "capitalist" act- is forbidden here. This dire, oppressive state is where "Child 44" begins, following respected soldier Demidov (Tom Hardy) as he struggles to justify his intentions to solve a series of child murders while trying to maintain orders from his superiors (Vincent Cassel) and subordinates (namely Joel Kinneman) who only seem to care about progressing their own futures. Much of the criticism leveled at the film thus far is its pace and mood- both factors I found absorbing and compelling. Yes, the jump start into the procedural aspect of the film takes a while, but it's the build up and eventual justification for Demidov (and wife, played by Noomi Rapace) to buck the system and try to do what's right that gives the film its emotional purpose. "Child 44", like Ingmar Bergman's "The Serpent's Egg" and Michael Haneke's "The White Ribbon", brilliantly presents the notion that certain times and places in history are melting pots for violent actions that not only reflect the moral vacuum but are existential outcries against the time itself.

After the opening few minutes where we observe the jittery, technology-fixated personal assistant Kristen Stewart field calls and report back to her actress-icon boss (Juliet Binoche), Olivier Assayas' latest film, "Clouds of Sils Marie" settles down for what may be his most patient, unhurried film yet. His ability to capture incandescent facial ticks and near-perfect moments of realization, connection and raw emotion are still present, but they're buried within three great performances from the above mentioned actresses as well as the troublemaker-cum-trainwreck young star played by Chloe Grace Moretz. Dealing with the personal and professional crisis of Binoche when her filmmaker turned mentor dies, "Clouds of Sils Maria" is essentially her film as she struggles with the decision whether to accept the role in a sequel to the film that once made her a star or stumble back into her life of hushed whispers and token Hollywood CGI starring gigs. The interplay between her and Stewart is natural, unforced, and as the layers of life versus unreal cinema life bleed into each other, Assayas maintains a steady (almost ethereal) grasp on the whole thing. It's not one of his masterworks, but even a solid Assayas film is better than 90% of what's out there.
Posted by Joe Baker No comments:

Austin Filmmaker Hannah Fidell's technical and thematic maturity doesn't seem to fit her young age (now only 28)..... especially since the salacious material in her feature length debut "A Teacher" is an easily untranslatable subject. But, she makes it work and work beautifully, almost peeling back the skin of her lead character Diana (Lindsay Burdge) with her camera and creating images that feel like they're projecting out of her increasingly crumbling sense of mind. As the thirty-something teacher hopelessly (and physically) unquenched by her relationship with teenage student Eric (Will Brittain), it'd be easy to dismiss "A Teacher" without seeing it for fear of something close to 'erotica-lite'. After all, Jennifer Lopez recently bombed with "The Boy Next Door", so scandalous older woman-student diversions aren't the most respected genres out there. Yet it's not necessarily the material that's stunning about Fidell's film. Although it is sexually frank and continually frames its May-December couple in no nonsense moments of intimacy and grown up playfulness, "A Teacher" is only the jumping off point for something more troubling, which comes into effect through the naturalistic and nuanced performance of Burdge as she reveals a woman running from some whispered emotional vacancies in her life and using her taboo attraction to mask the scars of something deeper. 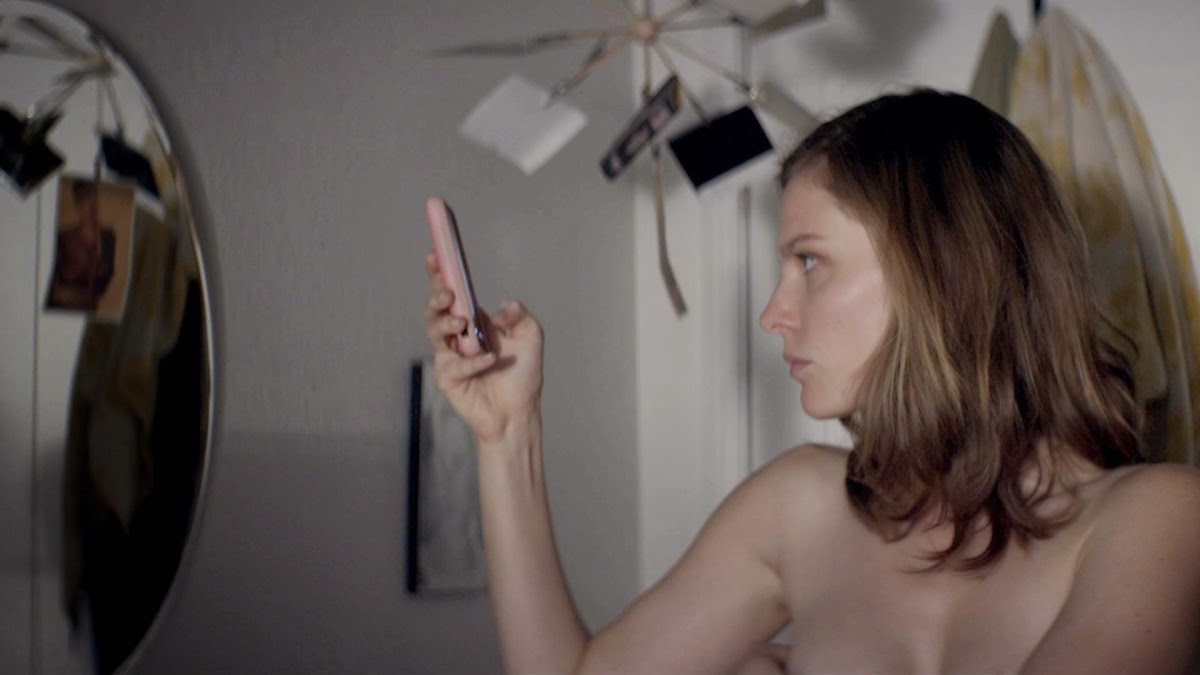 Employing a mixture of over-the-shoulder hand held shots (as Fidell admitted in an interview with "Filmmaker" magazine that she cribbed from watching all the Dardenne Brothers films) and glacial tracking moves, the overall mood of "A Teacher" is haunting and assured. As Diana's mental state and ability to control the passion confusedly swirling inside her escalates, Fidell's camera sinks closer and more unstable. If anything, Fidell's film belongs in the new wave category of young directors taking the cinema of Michael Haneke a step further and adding their own millennial generation spin. Antonio Campus ("Afterschool" and "Simon Killer"), Sean Durkin ("Marcy May Marlene") and Gerardo Naranjo ("Miss Bala") all tackle uncomfortable subjects head-on, refusing to flinch and utilizing their cameras as if we were watching surveillance footage, daring us to look away at the abhorred themes of youthful dispassion and mental insecurity. Even though we're not dealing with violent Mexican drug cartels or sadistic teen murderers with "A Teacher", its story is equally unsettling in the bland, cumulative ways it reveals the slow dissolve of a fragile mind. The moment teacher Diana (in school dance chaperon mode) hopelessly and jealously stares at a female student in the bathroom mirror simply because she went to the dance as young Eric's age appropriate date, we know the damage is irreparable. Like her entire performance, it's there in the eyes and guarded body language of actress Burdge.

Not a native Texan, Fidell's "A Teacher" does take place in Austin, Texas. Largely indistinguishable (except for a few out-of-focus I-35 shots with downtown looming in the distance), the film does detour into the hill country when Diana and Eric steal away to a ranch in the country. The freedom provided by its sun-drenched country soon becomes troubling. They may feel secluded, but the owner of the ranch (who alludes to knowing Eric but more specifically his father) unexpectedly drops in and almost busts the two together. Serving as the sensible wake-up call to Diana, she suggests the two cool their relationship for a while, which is easier said than done on her part. The rest of the film remains couched in numbing suburbia.... neighborhoods of pleasant looking houses and drab, fluorescent school hallways, but there is that wonderful sense of vastness represented by the ranch. Like Texas itself, "A Teacher" explores the highs and lows of this state's erratic landscapes.

With her next film already completed and receiving good word of mouth at this year's South by Southwest Festival, its fairly easy to say Hannah Fidell has arrived. I hope she continues her competent explorations of both Texas and the complex dynamics of the people who inhabit it.

Based on a true story about an aging woman's quest to see the Klimt artwork that was stolen from her family during World War II returned to its rightful heirs, Simon Curtis' "Woman In Gold" kept me involved since the idea of looted Nazi art has long been a fascination for me. Not so fascinating is the filmmaker's attempt to "cutify" the relationship between snippy Helen Mirren and shaggy-dog, good boy lawyer Ryan Reynolds, who honestly feels wrong for the role. Their imple, one-note performances aside, "Woman In Gold" excels when it tells the parallel story of Marie Altmann (Mirren) as a young girl (played to perfection by Tatiana Maslany) and just how their family dealt with the oncoming Nazi oppression. Not only does the 1940's set portion of the film ably emanate the fear, anxiety and taut intrigue of Marie's flight from her homeland, but it bolsters the frustrated energy of present-day Mirren and the incessant bureaucratic blockades thrown in front of her. Alongside "The Rape of Europa", "Woman In Gold" tells an all-too shameful story with glimmers of hope that certain pieces of great art can still be redeemed and reunited in the proper hands.

Should be retitled "Figures In the Landscape Part 2". For the first two-thirds of the way, this is a taut and wry survival thriller until a final ten minutes completely wrecks it. Full review at Dallas Film Now.

The films of Noah Baumbach can be alienating and acerbic, dealing with highly intellectual people who come off as either pretentious, stuck up or downright screwed up (see "Greenberg"). In "While We're Young", that pretty much all describes its main couple played by Ben Stiller and Naomi Watts. But instead of creating a lonely emotional vacuum for his characters to flounder, complain and waste away in, he imbues them with some depth and even had me caring about them. As a forty-something married couple, childless and left behind by the other couples of their age, Stiller and Watts find energy in a young couple (played by Adam Driver and Amanda Seyfreid) and try to re-live some of the spontaneity they once felt. Weaving in some smart filmic in-jokes and, ultimately ending up as a rather profound (and very funny) meditation on the veritable "truth" that lies right before their eyes, "While We're Young" ranks as the best film Baumbach has crafted yet. And Charles Grodin is fantastic.

A weird, off kilter Godard homage that, even though it has its shortcomings, I still recommend for its New Wave pop soundtrack and beautifully framed aesthetic. Read the full review at Dallas Film Now.
Posted by Joe Baker No comments:

Tunes For A Blood Moon Night


One of the better songs so far this year.


Massive love for Dallas band The Toadies (and short lived band Comet), but centro-matic/Will Johnson are a close second.


And here's Comet, such a shame these guys never broke through. Like Explosions In the Sky but a bit more off-kilter in their epic arrangements.