Not only is it cool to see a local boy doing good, but one that I've converesed with a few times and probably shared a theater with over the years in Dallas. High anticipation for David Lowery's "Aint Them Bodies Saints".

1. Detective Dee and the Mystery Flame (2010)- At the beginning, I was wondering how I was going to get through all the exaggerated wire-fighting and usual Tsui Hark bloatedness, and then the film clicked with me about the time the gang travels to an underground lair full of mythological weirdness. As a fairy tale, it works splendidly.

2. Oblivion (2013)- As an unrequited fan of Joseph Kominski's "Tron: Legacy", I had high expectations for this one. Visually, its terrific, but its rehashed narrative combining every science fiction film of the last 40 years is a bit much.

3. Pearl Jam Twenty (2011)- No idea why it took me this long to see Cameron Crowe's documentary about my second favorite band of all time! Crowe keeps his egotistical misty-eyedness to a minimum here, and I actually even learned something about the band. Full of great video clips and weaving a compelling story that pits Pearl Jam like a modern day Rolling Stones (complete with concert killings), "Pearl Jam Twenty" is a must for fans of the Seattle scene. And the moment that Eddie Vedder begins singing "Better Man" in concert, then the crowd takes over, and he leans back and just raises his arms in complete harmony is just a tender, magical moment that speaks volumes about the band and their following.

4.Trance (2013)- Danny Boyle's art heist-amnesiac thriller gets points for returning himself to the crazed, image splitting buoyancy of "Trainspotting", but when it's all over, it doesn't really amount to much. Everyone looks to be having tons of fun though.

5. The Lady Vanishes (1939)- A bit stodgy, yes, but this is Hitchcock firing on all groundbreaking cylinders, establishing the thriller genre and the death-on-a-train genre in one glorious swoop. I gasped when one plot point is explained in the fogged up window of a train and thought to myself just how ravaged a filmmaker Hitchcock has been over the last 70 years.

6. Daddy Longlegs (2009)- Ben and Josh Safdie's very uncomfortable ode to Cassavetes is most indebted to the performance of Ronald Bronstein as the wreck of a father to two young boys and the hell he puts them though. I've yet to delve into the films of Bronstein himself ("Frownland" has been called about as divisive a film as the mumblecore wave have crafted), but he's a palpable presence here and you sort of begin to root for him in an awkward way.

8. Something In the Air (2013)-  The latest film from French auteur Olivier Assayas feels like his most personal since “Cold Water” in 1994. Both films feature a young man named Gilles (this time played by Clement Metayer) acting as the surrogate for Assayas himself, tantalizingly poised on the precipice of awkward adulthood. But where “Cold Water” dealt with interior feelings of belonging and amour fou (in the relationship with beautiful but dangerous Virginie Ledoyen), the stakes are a bit higher in “Something In the Air”. Set in Paris after the May events of ‘68, this Gilles and his close sect of friends find themselves mixed up in violent student activism… so violent that they accidentally hurt a security guard during a routine vandalism attempt and are forced to split up in hiding. And while the first third or so of “Something In the Air” deals with these subversive acts of revolution, the real thrust of Assayas’ narrative kicks in after this action, setting up Gilles, Christine (the wonderful Lole Creton), Alaine (Felix Armand) and their various lovers to seek out their own paths in life. The title, while initially evoking the revolutionary scents in the air, subtly changes to denote the forks in the road each individual takes with their lives. Assayas handles all this reverie beautifully, never losing his gentle touch on relationships and staying to true to the way he continually crafts a knockout finale. It may not all be 100% accurate, but the way in which Gilles the man on screen become Assayas the filmmaker is still precise, loving and attuned to the nuances of everyday emotions. I really liked it, if you can't tell.

9. The Iceman (2013)- Oh what have Lumet and Scorsese wrought? Ariel Vromen's account of true life 70's hit man Richard Kuklinski (Michael Shannon) is overbearing, grungy and belligerent with little charisma and even less narrative center. Was this just an excuse for everyone to put on funny moustaches? Check. Other than that, "The Iceman" never builds towards any resolution, instead wallowing in 70's funk and macho bravado.

The Company You Keep

Robert Redford’s “The Company You Keep” is old fashioned, crackling entertainment. Blending real life drama (American terrorist organization the Weather Underground’s murder and bank robbery in the early 70’s) and misty-eyed recollection for a more revolutionary time through Redford‘s now aged good looks, “The Company You Keep” is a well guarded thriller that rarely takes a mis-step. Starring Redford (and a host of endowed actors, whose call list can become distracting at times) and Shia LeBouf, the film examines the undercurrents that are torn open when wanted activist Susan Sarandon turns herself in and reporter LeBouf uncovers more to the story than anyone originally bargained for. Not only is this Redford’s best film in years (both in front and behind the camera), but its an interesting study of the generation gap and the misnomer of documented history. “The Company You Keep” rolls trough a surprising number of plot points in a short period of time, and while the film could have probably been 3 hours long, its succinct enough and directed with precision.

Filmmaker Jeff Nichols has taken a break from his experimental efforts and crafted a very straight-forward coming of age tale in “Mud”. Two teenagers (Tye Sherian and Jacob Lofland) befriend a fugitive (Matthew McConaughey) on a literal island and come to know the reasons he’s hiding himself there. Nichols expertly trades in the white-trash spectrum of life, breathing energy and introspection into the deep south like few current filmmakers, and “Mud” is no exception, even if it’s a bit safe and ordinary from what I was expecting. Nichols is also adroit at the repression of violence and its cathartic results (especially in his brilliant debut film “Shotgun Stories”) and “Mud” does deliver the goods there as well in a thundering shootout finale. In fact, I almost wanted the entire film to be about the Joe Don Baker character- an intimidating man who enters 3/4th of the way through the film and enters a dark hotel room full of tough looking guys and asks them to kneel and pray with him. It’s a stunning moment that deserves its own movie.

I know I’m not being a good “auteurist” here, but Terence Malick’s latest effort, “To the Wonder” is a bit of a sham. Yes, it looks and sounds beautiful… and it even manages to make a Sonic drive in look downright ethereal. It encompasses a lulling soundtrack and features some beautiful people twirling and playing in the sunlight, but that’s about as deep as the film gets. What has made Malick such a cinematic force in the obsessive circles was his ability to create tactile feelings out of swaying atmosphere and complex settings. Think of the impact of turn of the century Texas in “Days of Heaven“, or the almost pacifist fields of grass in “The Thin Red Line”. “To the Wonder” is almost as place specific- the wind swept plains of southern Oklahoma, yet gone are any attachments to his men and women. Ben Affleck and Olga Kurylenko are introduced as lovers, and for the next 90 minutes they fight, break up and get back together without any current of connect ability for me. I simply didn’t care what happened to them. More interesting to me was the marginal story of conflicted local priest played by Javier Bardem, questioning some higher authority just like Kurylenko in poetic voice-over, and going about his daily duties in the community. Here was something substantial, as his devotees (seemingly played by non-actors) struggle with life itself. The way he gently hides from a woman constantly knocking on his door or the way the camera can barely keep a convict, grumbling about the brightness of the sunlight through the prison window, in frame feel like dazzling moments of real randomness. These scenes with Bardem, when juxtaposed against the fluctuating, childlike romance of Affleck and Kurylenko, only drives home how truly insignificant Malick’s couple really are.
Posted by Joe Baker No comments: 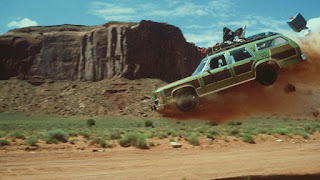 Things will be dark here for another week or so as I sort out some personal stuff..... namely moving into a dream home!
Posted by Joe Baker 1 comment: