On "Three Thousand Years of Longing"

Entering a film by George Miller, one can anticipate quite the fevered and frenzied ride. But he can also hint at the simpler truths in life, such as the magic of a pig to make us understand the power of humanity. His latest film, "Three Thousand Years of Longing" is fevered and frenzied, but it also hints at some beguilingly beautiful sentiments about connection, patience and (blink and you'll miss it) the idea of reincarnation. The dichotomy of his filmmaking career is well versed in this one picture.

Playing like a cosmic meditation about (literal) star crossed lovers finding themselves once again after many years of isolation, the film begins when academic lecturer Alithea (Tilda Swinton) travels to Istanbul for a mythology conference and finds herself smack dab in the middle of her own fantastical adventure. That comes in the form of a genie (Idris Elba) she accidentally releases in her hotel room after buying a bottle in a stack of trinkets from a local shop. Naturally, Alithea's preponderance for storytelling and myth lends the perfect ear for the genie to expertly tell three stories of lost love and ancient history while awaiting for his new steward to make her 3 wishes. But as his stories progress, not only do his tales exemplify the bottomless nature of such a wish, but they reveal the ways in which love can only entrap those pure of heart. 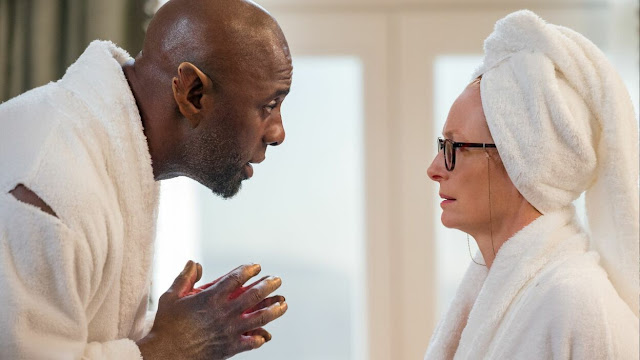 Swerving from his love for the Queen of Sheba to the more modern doomsday account of a kept woman who believed knowledge would be her salvation, Alithea grows to connect with the genie, and it's here that the film abandons its story-within-a-story structure and follows the couple as they try to carve out their own relationship in modern day Europe.

Magically alive and heartfelt, "Three Thousand Years of Longing" had me from the very start. As a fan of films like those of Julio Medem where the natural world is never very far removed from the fantastic when it comes to his varied couples, Miller's film (adapted from a short story by A.S. Byatt) swoons with overstuffed emotions matched brilliantly by his haunted-house visuals and CGI flourishes. Basically, there are enough ideas here for a dozen films, and at times "Three Thousand Years of Longing" feels like its about to boomerang into space before being yanked back into focus by the central relationship of Swinton and Elba. Their conversations in hotel room bathrobes and a demure English flat are the stuff of real human connection. And it matters because these two people have been running towards and away from each other for centuries, kept apart by wars, jealousies, madness, and sheer bad luck. At its core, "Three Thousand Years of Longing" is a commentary on enduring love. Just why does that one figure from Sheebe'a court appear out of thin air to traumatize Alithea? What does a restless leg have to do with the story? Miller has imprinted the film with a deep appreciation of star-crossed lovers who finally find each other again. In his sly way, he's made the most romantic film in years.