What's In the Netflix Queue #40

1. The White Darkness (2002)- Low budget auteur Richard Stanley's 'documentary' about voodoo doctors. I put a ton of his available in the queue a year ago and it's just now coming around. I was underwhelmed by Stanley's "Hardware" but recognize his cult status.

2. Rewind This! (2013)- Doc about VHS movies that got some pretty healthy talk a few years back from old fogies like myself who remember wandering the aisles of video stores in their childhood.

4. Oliver Twist (2005)- One of only two Polanski films I haven't seen.... the other being his obscure "What?" from 1972 that I'll be watching around the same time as this one. His take on the Dickens classic.

5. Plus One (2011)- Greek director Denis Iliadis did the remake to "Last House On the Left" a few years back and while his films reek of street-level 'degeneraism' (see his 2004 film "Hardcore"), I have to see everything available by a filmmaker when I get it in my head to do so.

6. Les Cousins (1958)- Early Chabrol that I feel like I've seen, yet somehow I don't remember a thing about. Time to rectify.

7. The Trip To Italy (2014)- Michael Winterbottom's follow-up to the immensely entertaining "The Trip".

8. Four Sons (1928)- Continuing on my appreciation of every John Ford film available. Check back sometime in 2017, probably, for a long post since he made about 500 films.

9. The Cut (2015)- Fatih Akin burst onto my radar when I saw his 2004 masterpiece "Head-On", but each film has been concurrently underwhelming for me. Perhaps this one will change my perception.

10.  H-Man (1958)- From the imdb description:  While investigating the mysterious disappearance of a low-level drug runner, Tokyo police discover that a race of radioactive flesh-eating creatures are emerging from the sewers and attacking civilians. Set in the criminal underground of 1950s-era Tokyo, this effort from B-movie maven Ishiro Honda is an obscure precursor to sci-fi noirs like Jean-Luc Godard's Alphaville and Ridley Scott's Blade Runner.
Posted by Joe Baker No comments:


James Schamus' adaptation of Philip Roth's novel strives to encapsulate the post World War II generation's swirling mass of emotions which includes the disdain for parental over-indulgence, the groping for expected spiritual (non) identity, and youthful sexual abandon. Lofty ideas, indeed, and "Indignation" hits the mark and more. As young Marcus, Logan Lerman is spectacular as the Jewish boy swimming against the grain at a prestigious Ohio college, whose life becomes even more confused when he meets beautiful (and non Jewish) Olivia (Sarah Gadon) and they begin dating. College is certainly about new experiences, new attitudes and finding oneself, but "Indignation" soon charts the upheaval of conflicting traditional versus progressive ideas and actions in a carefully modulated manner. Not only does Marcus not understand the ways of love, but his very ideals come under insidious attack from the school's dean (Tracy Letts), none moreso than a long give-and-take scene between the two that proves talk in cinema can be just as tense as anything else. "Indignation" is verbose, powerful, moving and, ultimately, heartbreaking in the way lives are seismically altered by a few words. One of the year's best films.

Now this is what summer entertainment should be. And maybe a tiny morsel of resurgence for Mel Gibson. Full review on Dallas Film Now.

Kind of feel old after watching this one. Video game spectacle as fodder. And I didn't really understand a lick of what was going on. Review on Dallas Film Now.
Posted by Joe Baker No comments:

The Space Between: How Jia Zhangke Sees the World

There are a select few directors whose work is porous with a distinctive milieu. Martin Scorsese and New York City. Richard Linklater with Texas. Victor Nunez with Florida. A good majority of their films frame a narrative around the living, breathing atmosphere of a specific region with breathtaking results. Yet, even fewer filmmakers absorb their city and make it a wondrous extra, at times upstaging the flesh and blood people inhabiting it. I'm thinking of Thom Andersen with Los Angeles.... a city so cannibalized by Hollywood that it takes a dirge-like documentarian to bring out its real ghosts and phantoms through stationary shots of the city's abandoned architecture. In both "Los Angeles Plays Itself" and "Get Out of the Car", Andersen shows us a Los Angeles seen everyday on the big screen but rarely seen.

The same goes for Chinese filmmaker Jia Zhangke. His mixture of hybrid documentaries and fictional efforts rarely venture outside of his own China (or even his hometown province) and the devastating advancement of civilization at the cost of its people is never far removed from the central idea. Specifically, four documentary films including "Dong", "Useless", "I Wish I Knew" and the masterpiece "24 City", could more accurately be called postcards of a deteriorating city. Even when he chooses an original idea, such as the listless inhabitants of a theme park in "The World" or following the impetuous teens of "Unknown Pleasures", there's China and its corners, peeling paint and bustling streets barely contained behind his speaking actors threatening to high-jack the entire thing. Watching the edges of the frame can often be more entertaining in a Jia Zhangke film than anything else. 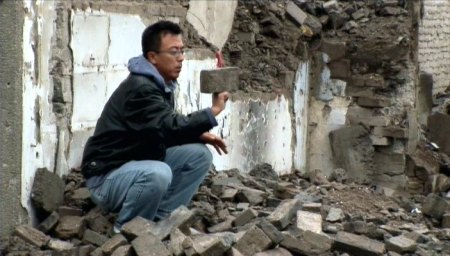 "Dong" (2006) begins Zhangke's fascination with the documentary form, although its feathery relationship with the genre is tenuous at best. Following Chinese painter Liu Xiaodong as he initiates several of his pieces, Zhangke ultimately shifts the perspective from a typical painter's bio to the way Xiaodong sees the landscape around him. Much more attention is paid to Dong as he stumbles through the apocalyptic brick and mortar remnants of the Three Gorges Dam- a setting also explored in his film "Still Life" released the same year- than celebrating the piece of artwork created. Zhangke's camera becomes fixated on the tanned, weary-faced men posing for Dong on the edge of a concrete barrier that resembles the idyllic vista of Jean Luc Godard's "Contempt" more than a hollowed out section of Earth. We follow Dong to Bangkok where he paints a scantily clad woman as she lies, suggestively, like a Sleeping Beauty. Then its back to the Three Gorges area where Dong and Zhangke visit with the family of one of the men who posed for him earlier as they deal with his death due to an unspecified accident. In its short (66 minute) running time, "Dong" becomes an evocative bio of the land rather than the person. It's a bold move for a film named after the person.

In "Useless" (2007), the same digressive attitude is taken. Ostensibly about a female fashion designer of earthy and wild styles, it takes about 25 minutes before Zhangke even decides to include her in the film. The first half is full of patient lateral pans around and across concrete beams as an assembly line toils away at creating the clothes. Exterior shots of the province of Guangzhoa and the daily, minuscule activities of its people inform portions of the middle half and then, finally, Zhangke focuses on Ma Ke, the designer/artist whose line of clothing evokes the film's title. Not quite as powerful as "Dong" in its meditative rhythms, "Useless" does expand Jia's sense of time and place over subject. The best parts of the film lie in the blank expressions of the factory workers as they barely notice the camera penetrating and capturing the lived-in spaces around them.

Rounding out his triptych, "24 City" (2008) is a damning critique of society-as-ghosts. Once a sprawling, mammoth factory known as Factory 24, urban revitalization and 'progress' sees the Chengdu structure being torn down to build a series of high rise condos and mixed-usage business. Part talking head interviews with people who worked in the factory or shared joyous moments there with family members, Zhangke's film is an overwhelming snapshot of time and place whose forward movement feels like a slap-in-the-face. Alternating between carefully timed tracking shots, lateral pans out to the city and powerful stationary shots as even the huge letters of the factory are sent tumbling to the ground, "24 City"- like Thom Andersen's films mentioned earlier- becomes a bittersweet portrait of a city in flux. Music and image marry with quiet and unsuspecting grace, such as the melancholy way an older man slowly makes his way around a worker's room and Zhangke's camera almost floats along the ceiling, simply observing the process. It's a scene that doesn't have any ancillary meaning, but it speaks volumes about the angelic quality Zhangke holds for these people and their crumbling exteriors. 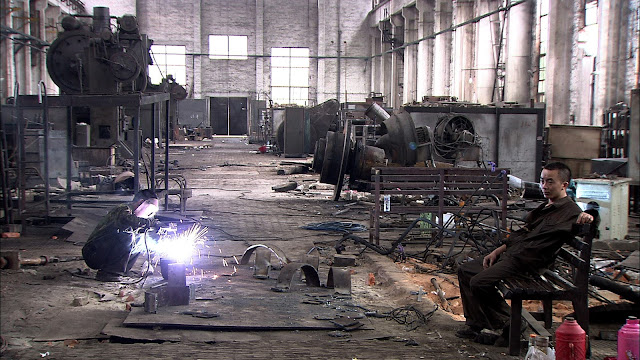 In "Useless" Ma Ke's fashion show in Paris is shown briefly at the end. Instead of the typical runway with models sauntering up and down, a huge curtain drops and all the models are wearing her clothes, perched ever so methodically on lighted pillars placed strategically around the room. The patrons simply walk around and look up at them. It's this interactive idea of looking and observing that informs all of Zhangke's work. China is the model and I don't get the sense Zhangke is going to stop observing anytime soon.
Posted by Joe Baker No comments: