I have a weakness for the late period Zhang Yimou films derided by most everyone else. While lukewarm on "Coming Home", I found his 2012 Christian Bale-missionary-stuck-in-war-torn-China "Flowers of War" an especially immersive and moving marvel. The same can be said for his latest project, "The Great Wall", again starring a Hollywood star (Matt Damon) who manages to save most of China. This time it's not marauding Japanese soldiers, but marauding creatures that bellow out from underneath a magical mountain every 60 years and do battle with humans. Yes, its preposterous, but its also an extravagant and visually stunning effort that features an unending number of imaginative moments calculated to shock and awe. Yimou's roving camera, his mise-en-scene within heavily crafted CGI backdrops and his fetishistic use of color are magnetic technical attributes that save the film from being yet another internationally produced Game of Thrones knock-off hoping to recoup its assets overseas... and then score whatever bonus it can with American audiences. It's spectacle, but its a glorious one.


A Cure For Wellness

Overblown in its length and overwrought in its trippy representation of madness and Lynchian weirdness, Gore Verbinski's "A Cure For Wellness" is a vacant ploy of commercialism masquerading as avant garde. And if the carefully composed images don't stir the feeling, then its narrative about a New York finance employee going to a mysterious Swiss sanitarium to bring back one of his firm's head honchos certainly doesn't move the needle either. As the employee chosen for this mind-bending mission, yet another misstep is Dane DeHaan, portraying our protagonist with about as much magnetism as the cold marble walls and floors ever present in the hospital. From top to bottom, "A Cure For Wellness" is an unpleasant, dour and alienating effort.


Oscar winning Farhadi film again! One of the very best of the year so far. Review at Dallas Film Now.
Posted by Joe Baker 1 comment:

Top 5 List: Films To Help You Deal With the Trump Administration (For better or worse) 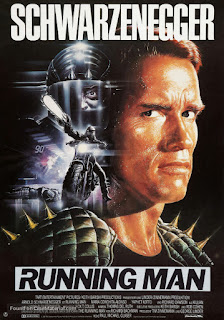 5. Running Man- Stay with me on this one. A middle aged, white TV host with perfect white teeth and hair that's coiffed like a perfect toupee (Richard Dawson) and taking place in the years 2017-2019, forces convicts and under privileged people to fight for their lives in a sadistic televised game show. Poised somewhere after an economic collapse and a totalitarian police state, Paul Michael Glaser's futuristic 80's thriller was a staple for kids like me growing up. Looking at it now, in the shadow of the current administration, it feels more prescient than ever as the cultural, economic and idealistic divide is growing wider by the hour. Yes, at the time, it was simply an Arnold Schwarzenegger 'actioner' vehicle- based on a short story by Stephen King- but today (as with so many sci-fi efforts that deal with political events in the guise of imagination), it comes across as a chilling deconstruction of our dominating reality TV obsession and our President with the same empty smile and coiffed hair, just waiting for the chance to throw us all to the hungry wolves. Whether a television camera will track it all is yet to be determined. Stay tuned dear watchers. 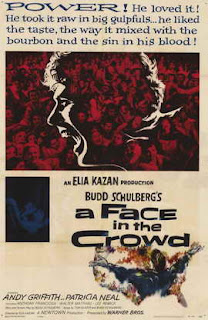 4. A Face In the Crowd- While working my way through all of Elia Kazan's films last year, I'm not sure I was quite ready for this one. I'd heard about it, but watching it during the summer with the presidential primaries going on, it slowly gained a resonance that I don't think would have been there otherwise. About the film I wrote, ".....exhaustive from start to finish, Andy Griffith portrays a drunken bumpkin who ascends to stardom as a folk-singing cultural prohpet. Combining Peter Finch ala "Network" and pre-dating Beatlemania while mixing in some brutal stabs at political and media stalwarts, "A Face In the Crowd" has alot on its mind. It winds up being a pretty sorrowful reflection on hollow stardom". I've begun to re-think this assessment and see it as a sorrowful reflection on hate mongering and the empty spectacle of someone saying just what the insecure/insulated/insolent American wants to hear without a shred of decency or thought to back it up. So yes, this film is pretty damn topical right now. I wonder what Andy Griffith would have to say about things right now. Let's all sing a song about this. 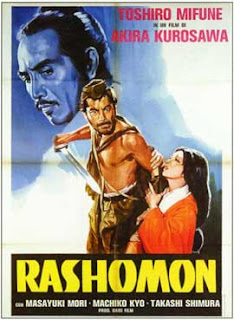 3. Rashomon- I've said it once already, but stay with me on this one. Akira Kurosawa's masterpiece not only set the precedence for wonky timelines in narrative cinema, but its perspective and suggestive story is an endlessly fascinating example of art cinema at its highest. Depending on who is telling the story, heroes are recast as villains and victims become perpetrators. A single act is shattered into a million perspectives and ideas. I can't think of a better analogy to the Trump administration than this. It's not a travel ban, says one official. Trump himself tweets that its a "ban". Someone else says its not a ban. It's not a "Muslim" ban. So many people are talking out of seventeen sides of their mouths, becoming a clusterfuck of bent rhetoric and non-transparent ideology. Kurosawa's tale of a crime splintered looks quite baroque compared to the double speak of today. Watch this one again for an extremely jaded outlook on things. And it's one of Toshiro Mifune's best roles, which is saying alot for his long, illustrious career.


2. All the President's Men

Probably the most obvious film on this list, but also, perhaps, the most hopeful? That being the current administration will eventually step over an imaginary boundary that seems to be pushed further ahead every day and finally commit some sort of treasonous act that requires impeachment. And if that day comes, Alan Pakula's film (based on the brilliant book by reporters Bob Woodward and Carl Bernstein) serves as a tremendous reminder of the sweat and tears that goes into a journalistic investigation to get the facts sound and accurate. 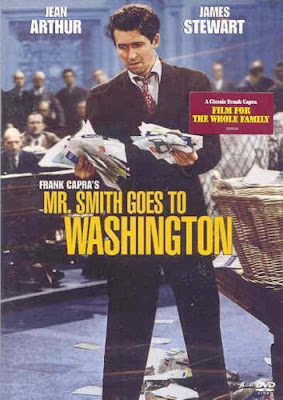 1. Mr. Smith Goes To Washington- Frank Capra was Hollywood's most humanist director. He routinely found goodness in most people's actions, thoughts and reactions. In his classic "Mr. Smith Goes to Washington", an ordinary 'bumpkin' replaces a senator and comes against the forces of political skulduggery at its most venomous. He eventually "wins" by filibustering and shining a light on the improper actions of others around him. Oh, if only it were that easy. I doubt there ever will be a Mr. Smith in our present government, but if there is one, now would be the time for him to step up and whisk us all away into his Capra-esque fantasy and wipe clean the (now daily) mounting improprieties of the Trump Regime. Released in 1939, "Mr. Smith Goes To Washington" was certainly attuned to the growing feelings of misrepresentation and dishonesty, but I think even Capra (and screenwriter Sidney Buchman and original story writer Lewis R. Foster) would shrink from the foulness of today. Ultimately, "Mr. Smith Goes To Washington" is a triumph for the small man against a hulking, corrupt institution. Placed alongside the other nihilistic, sardonic and utterly prescient films on this list, I include Capra's film solely because of its illusion of decency and innocence. Lord knows we all can use some rays of hope nowadays, and this film provides it.

The Damned: Christian Petzold's "Something To Remind Me"

In Christian Petzold's "Something To Remind Me" (2002), the air of fatalism hanging around the thing from the very beginning feels even more authoritative than any other in his long career. Tomas (Andre Hennick) sees a beautiful tall blonde Leyla (Nina Hoss) sharing his swimming pool and tries to start up a conversation. She ignores him but begins to slowly creep up into his life. She's there when his brother chats up a random girl having lunch at the same cafe. She eventually agrees to go out with him, leaving him breathlessly wondering where she went after a night of simple and unassuming exhausted sleep on his couch. The story abruptly shifts away from their relationship when Leyla begins working at a vaguely realized halfway house, again slowly but assuredly encroaching into the universe of one of the men housed there. Lurking, overweight and giving off the sense of a human teddy bear who often doesn't understand his own strength, Blum (Sven Pippig) can't help but notice Leyla's unsolicited flirtations. From there, "Something To Remind Me" crawls ever so carefully towards a climax that seems obvious and complex at the same time, firmly ensconced in the Petzold universe of Hitchcockian deception, social class divide and muted emotions. Not only is it a towering achievement of all these things, but further proof that Petzold is one of the finest directors working today.

Originally released on television in Germany, "Something To Remind Me" manages to elicit strong emotions of sexual persuasion and intense purpose without overtly showing anything... notably through the performance of Nina Hoss. Hiding so much behind her duplicitous gaze, the film gives off the feeling that everything is headed towards a shocking denouement by the way Petzold withholds certain information. And when that shocking finale does come- in typical Petzold fashion- it hits like a battering ram because the motives and decisions and consequences are so fraught with meaning and understanding. We accept why Blum does what he does. We feel for Tomas, a man who was thinking with something else on his body instead of his head, and we certainly can align with Leyla in her stoic, resolved plan. How all three come together is quite stunning.

"Something To Remind Me" marks the first collaboration between director Petzold and actress Hoss.... a partnership that will have lasted over 15 years now and five other terrific works, culminating with their masterpiece "Phoenix" (2015). It's like a match made in heaven as Petzold's camera seems to adore Hoss and the way she maneuvers around the frame and Hoss giving us just enough humanity to permeate from behind her typically icy facade. Like the best femme fatales, its easy to see why Tomas falls so hard for her and allows her to set her plan in motion. What isn't cookie cutter is the way Hoss makes us root for the femme fatale in serving justice to the injustices of the past.
Posted by Joe Baker 1 comment: