Director Brad Anderson is a chameleon. Working effortlessly in several genres and continually producing solid efforts, I've been an admirer of his films for years. There are idiosyncratic indies like "Next Stop Wonderland" and "Happy Accidents", or eerie horror films that hit all the right notes in "Session 9". Anderson has even ventured into psychological thriller mode in 2004's "The Machinist" starring a nutritionally depleted Christian Bale as a man whose grip on reality is sliding into the abyss. His latest film, "Transsiberian" (besides being blessed by the ubiquitous presence of Ben Kingsley) is another psychological thriller that traps a young woman (Emily Mortimer) firmly inside an international drug smuggling ring. More than half of the film takes place within the confined setting of a train traveling from China to Moscow as Mortimer and husband (Woody Harrelson) meet another young couple, Carlos (Eduard Noriega) and Abby (Kate Mara). It doesn't take long for the unspoken tensions in the young Abby to clue us in that something disturbing is boiling just beneath the surface, added by the fact that in the opening scenes, a Russian detective (Kingsley) is investigating a murder which may involve stolen drugs. 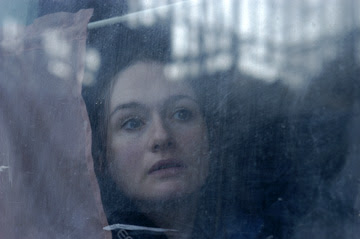 "Transsiberian" slowly tightens the screws on its two couples. Mortimer and Harrelson are portrayed as the "gee-whiz" American couple in for a much darker experience in the vast unknown foreign wilderness, punctuated by some shots of the train plowing through enormous snow-covered landscapes that will definitely put a chill in you. The disappearances, luggage mix-ups and suspicious glances begin to mount in terrific style. And when Kingsley shows up again 2/3 of the way through, "Transsiberian" turns dark and violent without losing any psychological weight. But though Harrelson and Mortimer have the starring roles, the real stand out here is Kate Mara. Not just a beautiful face, she rolls through the film as the most complex personality. Obviously being manipulated by her own personal demons, she gives a nuanced performance and in the end, this is certainly more her tale than anyone else.

Many people have used the Hitchcock comparison to identify "Transsiberian" and honestly, anytime you feature two people on a train, the references are bound to follow. But with so many psychological thrillers being lazily labeled as such, "Transsiberian" deserves much more. Playing in limited release, it hopefully will receive a larger push once the summer blockbusters begin dying away.
Posted by Joe Baker