Robert Altman's "Nashville" is generally regarded as the quintessential and sprawling masterpiece of the 70's that best encompasses a wide swath of political, cultural and religious factions of people. It's three hours long and serves as a microcosm for the United States (or at least middle America) and it still registers strongly as a descriptive and incisive time capsule of the period. I propose an alternative take- in the form of Michael Ritchie's "Smile". Released in the same year as "Nashville" (1975), it's a film that posits itself in small town California and reveals ideas and personalities just as deeply insightful about America as Altman's prescient vision. Instead of being a wide view of the people trying to make it in the country music scene, "Smile" fashions a black comedy around the surface artificiality of a beauty pageant. And while "Nashville" ultimately sinners into an angry evocation of political malice, "Smile" accomplishes the same feeling of lost innocence in smaller, more human increments. This is, simply put, one of the best films of that decade.

And in addition to that high praise, director Michael Ritchie is probably one of the most overlooked directors of the decade as well. Just look at his track record from 1969 to 1976- seven years saw the release of "Downhill Racer", "Prime Cut", "The Candidate", "Smile" and "The Bad News Bears". An amazing batch of films. Based on a screenplay by Jerry Belson, "Smile" stars Bruce Dern as the good 'ol American dad tasked with being the head judge of the Young American Miss beauty pageant as it stumbles into the small California town of Santa Rosa. Interspersed around the huge local event, we see glimpses of the seething imperfections beneath the pseudo glamorous surface. Dern's youngest son, 'Little Bob' (Eric Shea), is eventually arrested for being a peeping tom outside the dressing room windows of the beauty contestants- contestants including Melanie Griffith, Colleen Camp and Annette O'Toole. Dern's best friend, Andy (Nicholas Pryor), is the town drunk, suffering the onslaught of depression and avoiding his frigid wife, a former beauty pageant winner played by Barbara Feldon. The only advice that Dern can give his best friend is to "cheer up" and attend the local Knights of Columbus dinner later in the week... a dinner which, in and of itself, turns into a marvelously twisted set piece that requires all the men to dress up in white robes and force certain members to kiss the butt of an uncooked chicken. In the relationship between Dern and Andy comes the film's most searing example of suburban malaise. Even though Dern (and the whole town) believe that the ensuing pageant will somehow wash clean their problems, the influx of beautiful girls only magnifies their statical lives. There are old beauty queen winners struggling to deal with mid-life crisis, janitors who see the whole contest as another excuse to drink on the job and the fact that Dern can't control his own family. Even the beauty pageant contestants discover that life in small town California is not the answer to their boredom. While examining the self-conscious issues that surely arise from every angle of the beauty contest, "Smile" most acutely emphasizes the disconnect that exists in virtually every character searching for that elusive American Dream, whether they're competing or not. 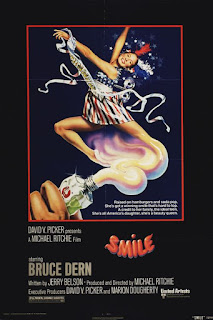 Scathingly funny and full of wonderfully composed observations, "Smile" deserves to be re-assessed today. I dare anyone to screen this film and "Nashville" back to back and not come away inspired by both filmmakers and their genuine understanding of their day and age. "Smile" is the perfect title for a film that masks itself as a comedy when its true intent is to peel away the malcontent surface of its characters and their environment- and in the meantime pave the way for every other "suburban anomie" film from the works of Linklater to "American Beauty". Probably the most revelatory moment of "Smile" comes in its final scene. Obviously disturbed and disillusioned by the entire affair (and that the pageant itself is over, relegating him to just an RV salesman again), Dern approaches three marines as they're wrapping up an American flag on stage in the empty auditorium. He comments to them with, "You boys sure did a nice job." He then tells them he was in a certain division of the military and is met with a "yes, sir." The soldiers turn to walk off when one of the soldiers mumbles "you see the tits on miss san jose?" It's just yet another small chink in the armor for a man looking for something decent and traditional in a life that no longer matters. Solace and understanding can't even be found in America' s finest... and artificiality reigns supreme again.
Posted by Joe Baker