After his last few films (and really since "Polytechnique" which is a shame so few people have seen), filmmaker Denis Villeneuve is, quite simply, working a higher level than most around him. With "Arrival", his plume of visual poetry becomes married with a heartbreaking piece of human fiction that gives to birth to a staggering science fiction film that left me breathless and gasping for my senses. Reaching far beyond the simple establishing premise of aliens visiting Earth and our clumsy, inconsequential methods of communication with them, "Arrival" is a riveting exploration of memory, language and compromise. As the linguist who unlocks the secret, Amy Adams delivers a wonderful performance, allowing herself no show-off moments and almost losing herself in the murky blacks and blues of Villeneuve's vision (shot by DP Bradford Young) before emerging as one of the year's strongest characters on screen. It's been said that "Arrival", whose screenplay is based on a story by Ted Chiang, is the closest we have to Tarkovsky-esque science fiction (or Russian sci-fi mind melts in general) and I tend to agree. Beautifully rendered in every moment and gesture, "Arrival" ranks as one of the most magisterial films of the year.

A star is born in actress Samantha Robinson, the perfect embodiment of carnal treachery... sculptured cheekbones and all.  Full review on Dallas Film Now.

The Edge of Seventeen

Equal parts formulaic and refreshing, there's certainly an honesty to Kelly Fremon Craig's debut that echos back to the 80's teen film in which everyone is either awkward or popular and the pitfalls of adolescence that erupt on either side. Led by Hailee Steinfeld in a performance that only shows how terrific a career she has ahead of her (as if "True Grit" didn't already solidify that), "The Edge of Seventeen" navigates in a precise and humorous manner, ably evoking those pimple-induced days of high school and the swirl of emotions that comes with it. Even though Steinfeld portrays a girl whose way-too-beautiful-to-be-this-awkward (aka the formulaic part), the film more than makes up for it in unexpected and moving ways.

Isabelle Huppert imbues the film with a perverse girl-power logic, seemingly more comfortable buying pepper spray and sharp objects than groceries. And I wouldn't want it any other way.  Full review can be read at Dallas Film Now.

One of the single most moving soundtrack themes ever composed.

Being unfamiliar with the novel, entitled "Fingersmith", that Park Chan Wook's "The Handmaiden" is based upon, I can't ascertain just how much of its eroticism and psychological deviancy is transposed to the screen. If it's half as good as Wook's adaptation, then I can't imagine why it didn't reach soft-core-female-thriller status like E.L. James (the "Fifty Shades of Gray" series) or Paula Hawkins ("The Girl on the Train"). Regardless, the current film itself is not only one of the best films of the year, but a masterstroke of filmmaking by Wook whose no stranger to shocking, abrupt narratives that turn on a dime and whose undercurrent of broiling social commentary remain hidden just enough to become subtext. 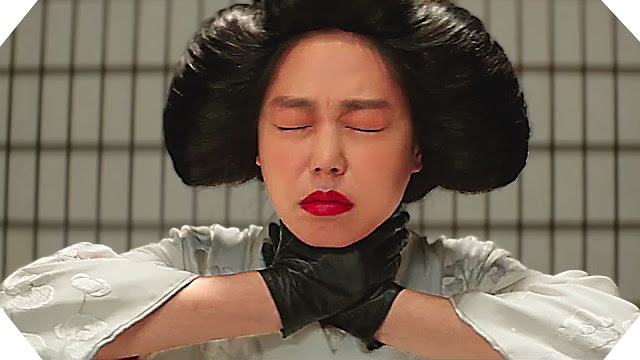 The subtext here is the uneasy relationship between people of Korean and Japanese descent and how they use the barriers of language and identity to leave behind the past. When one character wants to hide something snarky or condescending to another, they speak in one of the languages the other cannot understand. And Wook wisely claims up front that one set of dialogue will be subtitled in yellow while the other is in white. Matching this cultural war of words, the deviant and shocking aspect comes in the form of a steamy, convoluted relationship that forms between Korean handmaiden Sookee (Kim Tae-ree) and Japanese Lady Hideko (Min-hee Kim). Initially devised as an elaborate scheme to force Lady Hideko to marry a swindler named Count Fujiwara (Jung-woo Ha) and steal her large fortune, of course, things don't go as planned and Sookee finds herself torn between her corrupt assignment and a growing attraction to her Lady.

"The Handmaiden's" formal brilliance is matched only by its scathing wit in the way it feverishly peels back layers of deception and perspective. And it just wouldn't be a Park Chan Wook film without a dash of violence, revenge and shifting alliance that constantly jerks the expectant rug out from underneath our careful toes. A rope hanging from a tree one moment becomes a casual visual joke in another. A set of large beads on a rope found in the drawer of Lady Hideko in the beginning become a device of supreme pleasure at the film's end. And each character ends up in a drastically different place than where they started out, both in emotional variance and cultural identity. It'd be quaint to call the film a thriller, but it so succinctly turns the screws on the viewer that it reminds one of the impending dread and malaise of "Oldboy"... with a bit of lesbianism thrown in for good mix.

And "Oldboy" is the voice in which "The Handmaiden" resembles the most after Wook's more recent efforts like "Thirst" and "I'm a Cyborg, But That's OK". Yet, instead of retreading the past, "The Handmaiden" feels vigorous and fresh, like a Merchant-Ivory production washed through the lens of David Cronenberg. And by the time Lady Hideko cuts her hand with a knife to feign bodily harm elsewhere, its pretty clear body horror can invade even the most uptight sectors of Japanese society. It's just yet another deception in a film built around them.
Posted by Joe Baker 1 comment: