Even a day later, I'm still smiling about certain scenes in the Coen Brothers' "Burn After Reading". There's the (almost in-joke like) way that Osborne Cox (John Malkovich) mumbles "and what the fu** is Palmer doing here?" in the opening scene, referring to some nameless guy sitting behind him. Then there's the way Chad (Brad Pitt, in a soon-to-be iconic performance for the Coen Brothers loose-screw catalog of personalities) carries out his first blackmail phone call to Cox- a scene and line reading that got the hardest laughter I've ever felt in a movie theater from a crowd. And then we have the chair that Harry (Goerge Clooney) builds for his wife. I'll let that visual joke stand on its own. The point in all this? There may be snide and simple critical pans about the Coen Brothers lack of artistic determination post-Oscar, but for my money "Burn After Reading" is a near perfect example of two filmmakers who boundlessly jump from genre to genre without a hint of pretension. "Burn After Reading" will needlessly be compared to "The Big Lebowski" for nothing less than the fact it was the comedic follow-up to their other previous reach for critical acceptance with "Fargo". I'm prepared to say that "Burn After Reading" should (and will) hold up as an equal counterpart to that bawdy LA noir we all know and love. 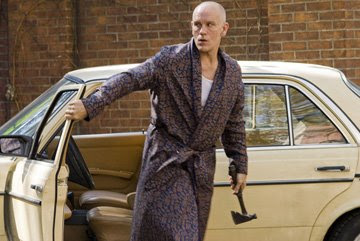 Like the best of their work, "Burn After Reading" places us, geographically, in a very specific time and place. This time its current Washington DC, Langley and Georgetown. An added bonus to all this- filmed in DC along some of the very same sights I walked three weeks ago including the memorial bridge and those green park benches that line the reflecting pond in between the Washington Monument and the Lincoln Memorial. Like "The Big Lebowski", "Burn After Reading" tries to settle into a genre (the spy thriller) but never really commits. There is some talk of selling intelligence secrets, but the main people are just as clueless about their plan as the kidnappers in "The Big Lebowski". The real focus of "Burn After Reading" is the ill-conceived and completely inane motivations that drive screw ball personalities into even screwier circumstances. Everyone is sleeping with someone else, there may (or may not be) people tailing Justice department employee George Clooney and there's a head of the CIA (played to whimsical perfection by J.K. Simmons) who just wants everything to go away. Every line of dialogue, every stutter, every puppy-dog glance by fitness manager Richard Jenkins and every long drawn out speech by Tilda Swinton's lawyer (we know how the Coen's love verbose 40's speak right?) hit the right note in the Coen universe. These aren't real people, but humorously designed personalities that leap off the screen. And when you throw in top secret intelligence and blackmail, well then the whole affair gets messy. "Burn After Reading" excels in the messiness and ends on such a jarring note, that the Coen Brothers are quickly becoming masters of the anti-climactic finale in their last two films. Judging from some of the reactions I heard while leaving the theater, people are just as dumbfounded and upset due to the film's lack of a 'logical' conclusion as they were about "No Country For Old Men" and its contemplative cut to black. Jarring in both cases, yes, but for me they both work exceptionally.

I wrote an earlier post describing how "The Big Lebowski" is an eerily conceived re-interpretation of Ivan Passer's 1981 film "Cutter's Way". Not quite as overt, but "Burn After Reading" would serve as a blissful companion piece to Ronald Naeme's 1980 comedy "Hopscotch" about a CIA operative (Walter Matthau) who is demoted and then begins writing his memoirs, using each chapter as a taunting device to the agency as he mails it to them in pieces from around the world. Globetrotting and consistently entertaining in the same dry humor displayed by the Coen Brothers, "Hopscotch" is certainly more trusting of its character's intelligence, yet the world of the CIA bureaucracy is just as demented and infantile. While "Burn After Reading" cares less about the actual government agency and more about the paranoia of big brother, both films offer a dark and scandalous picture of Washington security bureaus. I'm not suggesting that the Coen Brothers have lifted any ideas. There's always room in this world for two great CIA comedies. "Burn After Reading" is also just simply a great "comedy".
Posted by Joe Baker

Brad Pitt can be so funny, as long as he's not taking himself too seriously... in any case, it's about time someone made good use of his habitually spastic arm movements