Robert Greene's "Kate Plays Christine" is a jangled web of theories and diversions that not only brilliantly upends the very definition of "documentary", but causes one to marvel at how the boundaries of the genre can be obliterated and re appropriated so easily. That the film also works into its mechanized study touches of tried and true onerism such as an actress burrowing into a role with little abandon for her well being and "Kate Plays Christine" very likely will melt your brain. 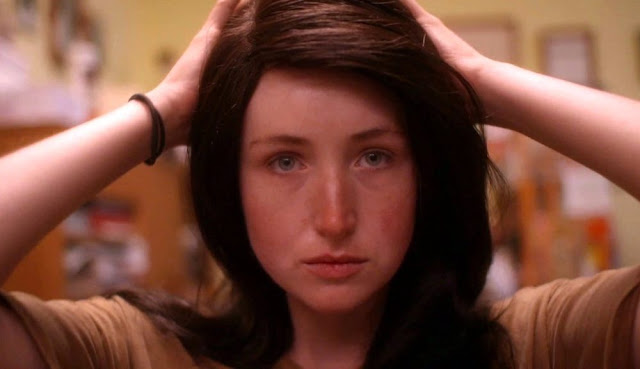 The actress in question, Kate Lyn Sheil (who I first noticed in a supporting role on Netflix's "House of Cards") plays herself accepting the role of portraying Christine Chubbuck, a now infamous 70's era Florida reporter who committed suicide on air, and then traveling to her hometown researching her life and mannerisms. Greene, ever present by Sheil's side (which is the first hint that maybe his intended idea was the intense preparation all along) observes the moral and professional hurdles Sheil comes in contact with as she gets to know Chubbuck through co-workers and friends. Watching Sheil struggle with crawling into the dark mind space of a woman who found both her life and professional ambitions as unworthy of anything more than eventual public shock appeal is tremendous. Even more cringe inducing is the footage of Greene filming the fictionalized moment when Sheil as Chubbuck commits suicide on air. Draw out over an agonizing 15 minutes as Sheil continually starts, stops, fidgets and internalizes the scene, it's one of the more harrowing and perfectly realized recreations of acting I've seen in quite some time. Robert DeNiro gaining forty pounds to play Jake LaMotta has nothing on Sheil here.

As I said at the beginning, what makes "Kate Plays Christine" so energizing is just where Greene's intentions lie. If the film was slyly conceived to be what it is, then he's a master provocateur of the hybrid documentary. If all of this was happenstance and the focus of the film slowly morphed out of Sheil's true struggle with capturing the inner demons of Chubbuck after realizing she was nothing more than an undiagnosed woman with manic depression, then that makes the final product all the more shattering. Either way, "Kate Plays Christine" stands as a probing and masterful exploration of the boundaries between real and fictionalized emotion.
Posted by Joe Baker 2 comments: