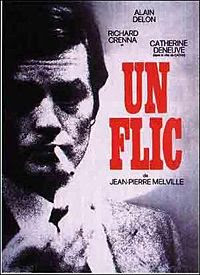 Also known as "A Cop" or "Dirty Money", "Un Flic" was Jean Pierre Melville's thirteenth and final film released in 1972. During the course of his last half dozen films (excluding the colorized "Army of Shadows" and "La Cercle Rouge"), Melville made a practice of distilling hard boiled American noir into simmering black and white (but distinctively French) incarnations of the genre. Fedora hats, trench coats, men who speak very little but command attention through their intense posturing, intricate heists- all of this was vintage and trademark Melville. But while "Un Flic" flourishes in the same characteristic gestures as those before it, it's also a whole new animal. This is film noir with the blood drained out of it. The story itself- involving a band of bank robber and one policeman's search for them- is stripped down to the most abstract and calculated of narratives. The opening bank heist, filmed in meticulous detail and eerie silence, focuses on small remnants rather than the adrenaline rush of the robbery itself. Quick cuts to hands holding guns, the careful coordination of the robbers' placement in the bank, and the wintry blue exterior call to mind a Bresson film- a film more interested in the outward dynamic architecture rather than the internal thought process. I'm just as guilty as the next guy for throwing around faux descriptions like "post" and "neo", but with "Un Flic", both terms are apt. Melville has jettisoned the fat that usually surrounds a noir and intensifies the diligent actions of his cops and robbers from start to finish. While alot of noirs pay strict attention to the careful logistics of the various robberies (which "Un Flic" does on two occasions as well), Melville highlights this dry observation throughout, permeating every breath in a cold and calculated manner.

While the action of "Un Flic" is meted out with this calculated digression, the emotions of its three main characters are just as muted. As the titular 'cop', Alain Delon casually shuffles through the film, methodically following up on leads and slapping informants around with little care other than worrying about ash being flicked on his suit from the cigarette that's constantly situated on his lips. He does allow himself some entertainment, often visiting night club owner Cathy (Catherine Denevue). In keeping with the theme of a woman trapped between the right guy and the wrong as played out in earlier Melville works, Cathy is involved with Delon as well as the leader of the bank robbers (played by Richard Crenna). Melville seems especially fond of the synchronicity between cop and crook. Their universes, he seems to say, are universally linked. With that in mind, it's only ironic that the biggest break for Delon in his pursuit of Crenna stems from the routine identification of a dead body. For a cop, Delon seems to be doing the least work possible and yet he still stumbles into the thick of things through his relationship with Cathy. And, in keeping with the icy facade of the whole film, the loudest turn of the narrative is gleaned over, ignored and barely processed without a single celebratory music key or framing device. Like the cold stare of Denevue (even while watching one of her lovers being gunned down), "Un Flic" is a harsh mood piece that looks and feels like a noir from outer space, refusing to allow any sentimentality to seep into its glacial heart. This may all sound like a dreadful experience, but it registers as a morose yet fitting way to end a career. In the wake of nostalgia, Melville may have created one of the most interesting noirs due to its very lack of similarity.
Posted by Joe Baker