Honed into the type of leisurely, anemic snapshot-of-time that would come to define the careers of Sofia Coppola and scores of others in the post 90's indie new wave boom, Floyd Mutrux's "Dusty and Sweets McGee" outlives its thin pseudo documentary beginning to morph into a sobering, half-dreamt memory of sunny California and the dark storms of addiction that roll just beneath its pleasant surface. That this film is relatively unseen today (thank you Turner Classic Movies for its late night broadcast this month!) only adds to the film's lilting presence somewhere between tone poem beauty and after school special didactic. 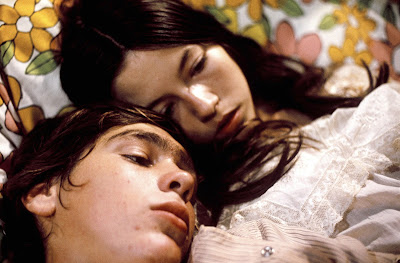 Beginning with introductions to its main slate of characters (supposedly real addicts playing themselves), Mutrux lets the good times roll, synching images of their late night car drives around the valley and frolicking in bedrooms to a host of popular tunes as if timed to a hay-wired jukebox unable to settle on 1 song for long. Even though it feels like "American Graffiti" (1973) and Mutrux himself would later direct "American Hot Wax" (1978), the film soon settles into the darker reaches of its time and place. We see Clifford "Tip" Fredell recounting his jail house experiences, getting high in laundromat bathrooms, and planning a big score with his equally stoned partner. We get glimpses of male hustler Kit, who dispenses shards of hustler wisdom with comments that he's done things with married men not only in their wife's bed, but also in the beds of their children. We get to know dealer City Life who, when he's not polishing or admiring some type of sports car, trots all over the city peddling his drugs or picking up women and talking constantly. In one such conversation (which invariably involves both a car and a woman) he spouts what's perhaps the most perceptive line of the film. After describing his actions in a "gang bang" back in Texas, he stops short of ending his story with a regretful, hangdog stare and "most of the people in Texas are assholes."

But through the tangled web of direct cinema "interviews" and staged action, the most penetrating relevance of "Dusty and Sweets McGee" falls in the laps of two couples, college aged Beverly and Mitch and the much younger Larry and Pam. It's almost excusable for the malaise that surrounds Beverly and Mitch. Constantly strung out, bickering, but prone to moments of unadulterated honesty and affection between them, they're basically functional addicts. In fact, after shooting up in one scene, she has the strength and wherewithal to stumble to her car and retrieve her crossword puzzle book. They should know better, but at least they're surviving with each other.

More tragic is Pam and Larry. Looking to be between 14 and sixteen, they are the baby-faced harbinger of drug addiction... the type of young kids that launched a thousand public service announcements. Never seen outside of their bedroom, it's almost excusable to accept everyone else in the film. They've made their hardened choices and continue to make bad ones, but they had a chance. "Dusty and Sweets McGee" wants us to experience drug addiction in its horrible array, and Larry and Pam are the shocking finger wave that hopefully turns at least someone away from trying it. Mutrux also returns to one of the most painful needle drops in the film, timing the teenagers' shooting up to the crescendo of Van Morrison's "Into the Mystic". It's poignant because Larry and Pam are entering their own stratosphere before crashing back to the hard reality of a non ambiguous Earth.

Released briefly in 1971, "Dusty and Sweets McGee" never quite made the mark it hoped. Although Mutrux is perhaps one of the more underrated writers and filmmakers of the 70's (just check out his wonderful bio) the film is one of those discoveries that needs to be made. It may seem tame in comparison to the German miserablism of Uli Edel years later, but as a touch point in independent American lyricism, its message hits loud and clear.

Whether one interprets Celine Sciamma's latest film as grounded science fiction time travel fantasy or something much more innately interior, it's still a powerful film of simplicity and genuine heart. Working with child actors can be dicey, but in Sciamma's capable hands, "Petite Maman" quickly melts any precocious waves in the very beginning as young Nelly (Josephine Sanz) wanders around the assisted living home where her grandmother has just died and sweetly says goodbye to everyone. From there, Nelly holes up in the dead woman's house as her mother (Nina Meurisse) initially tries to deal with the loss by packing, but subsequently disappears and leaves young Nelly to fend for herself and interpret her swirling emotions with her father (Stephane Vrupenne) who probably understands even less. Within this tepid space of loss and confusion, Nelly stumbles upon a girl playing in the woods (played by real life sister Gabrielle Sanz) whom she soon comes to realize is her mother at that age. The joy of "Petite Maman" doesn't require the viewer to be dazzled by its metaphysical conceit. Sciamma wants us to feel and experience (as she has in so many of her exquisite films) loss, death, wonder and adolescence in equal measures, and in its compact running time, the film magically does so. And there's a needle drop towards the end of this thing that just took my breath away. One of the year's best films.

Audrey Diwan's "Happening" follows- in rigorous attention- a young girl's (Anamaria Vartolomei) attempt to seek an abortion in 1960's France. We never see the sexual encounter that leads to young Anne's desperate search, which makes the film all the more compelling. "Happening" isn't concerned about the fleeting pleasures of lust or the act of sexual experiences, but with the hard and immovable barriers placed around women in a not-so-distant supposedly progressive society. As Anne, Vartolomei is superb and Diwan's control over the mood and tone of Annie Ernaux's source material doesn't make for easy viewing, but in the light of recent backwards events here in our present, it makes "Happening" all the more urgent.

Filmmakers David Siegel and Scott McGehee have a varied career. Starting in the early 90's with the no budget body invasion "Suture", helming the eerily unnerving thriller "The Deep End" with Tilda Swinton in the early aughts and then working sporadically during the last decade, nothing really points to the majestic crescendo that "Montana Story" fills the viewer with. Not that they're bad filmmakers, but their latest is so full of subtle life and overwhelming vistas that it doesn't quite gel with any of the quirky, hard-scrabbled indies they've created in the past. I'm sure having Hayley Lu Richardson as your co-lead helps as well. A boiling family drama played out against the windswept beauties of the Montana mountain range, "Montana Story" looks at the curdled relationship between a sister (Richardson) and brother (Owen Teague in a role as equally good) dealing with the traumas of their past over the deathbed of their dying father. Yes, the set-up sounds familiar and the type of slowly simmering fireworks display that's launched a thousand indies, but "Montana Story" is different. Siegel and McGehee have painted their film with vivid supporting performances- especially that of hospice aid Gilbert Owuor)- and poignantly sketched secondary characters- like that of Eugene Brave Rock- that the film takes on an unrehearsed sense of acceptance and gravity. And when the emotional pay off comes between brother and sister, "Montana Story" burns with a pithy truth, and its then released in a heartbreakingly sweeping image of true freedom for everyone (and animals) involved.

1. Everything Everywhere All At Once (2022) - I went into Daniel Kwan and Daniel Scheinert's "Everything Everywhere All At Once" skeptical of the adoring buzz, but after the first hour, I began to feel myself crumbling to the film's sweet energy before collapsing into an emotional mess at the finale. This is an exuberant celebration of family, inclusion,and film genre itself as it marches forward with it's head spinning tale of multiverses and hot dog fingers. Led by the amazing Michelle Yeoh (with heartbreaking supporting turns by Ke Huy Quan and Stephanie Hsu), The Daniels have created a modern answer to the iconic, trippy, and melancholy past works of Michel Gondry ("Eternal Sunshine of the Spotless Mind") or Julio Medem ("Lovers of the Arctic Circle") with a film that stretches the concept of love and acceptance across a spectrum of space and time.... and come out the other side with a beautiful rendition of what makes us human.

2. The Lodger (1927) - Early Hitchcock that, while it features the pregnant ideals that would mature in most of his best thrillers, that's the most interesting thing about it.

Taken from transcripts of the Romanian Securitate as they investigated the sudden appearance of chalk graffiti around the city in mid 1981, Radu Jude's "Uppercase Print" is an intellectual examination of both a time and place where liberty needed to be called upon as a dying idea. Interspersing governmental films, weird musical interludes and VHS images of the country (complete with bad VCR tracking issues!) amongst a theatrical reading of the now released investigation notes of the graffiti that eventually ruined the life of a young student, "Uppercase Print" begins as a dryly humorous effort before shifting into an especially acrid portrait of oppressive nationalism. The above quotation is from the crack investigative reports of the secret police and Jude's film initially seems like a comedy of communistic generality. Needless to say, things turn very dark, formally assured and completely heartbreaking by the end. I haven't seen a few of Jude's other pointed mixed-media documentaries about his home country, but after this one, I look forward to diving into them.

4. The Long Haul (1957) - Diana Dors. Wow. Not sure that her attraction to Victor Mature is warranted, but this is a sharp (and under seen) Brit noir, part fatalistic drama and one-third "Wages of Fear".

5. Satan's Brew (1975) - Probably one of the more 'extreme' Fassbinder films where a creatively blocked poet murders people, screws any woman who moves and lives with his screaming wife and dead fly collecting brother. For Fassbinder characters, its his most exaggerated clique and one that I found to be repellent and compulsively watchable at the same time.

6. The Unbearable Weight of Massive Talent (2022) - Sure, Nicholas Cage pokes lots of fun at himself and that's enjoyable in small measures, but this action comedy bored me more than anything else. I kep hoping it'd turn into a "Bowfinger" like commentary on itself.

7. Ambulance (2022) - Garret Dillahunt, awesome. Everything else, not so much, I understand going in that it's Michael Bay, and there are some gloriously conceived tracking shots, but please let the logistics breathe a little. Still, that's obviously not his style.

8. Law of Desire (1987) - Digging into some of Almodovar's early film output, and this is his best so far. Kinky when it needs to be, immensely funny at other times and a fantastic finale. Don't we all wish Antonio Banderas kept making Almodovar films?

9. Codename Cougar (1989) - Zhang Yimou's debut film (co-directed with Yang Fengliang) is a minor thriller about a hijacked plane that's forced to crash land in between two non-communicative governments (Taiwan and China) and the military action to free its hostages. Most notable for a young Gong Li and the final fifteen minutes that serve as a beautifully rendered precursor to Yimou's next decade of filmmaking and his elegantly composed images and color.

10. All the Old Knives (2022) - A subtle spy thriller throwback with conversation rather than commotion. Reviewed here.