Over the past few days, I've seen two films that deal explicitly with the divisions between black and white in varying place, time and culture. Neil LaBute's "Lakeview Terrace" and Spike Lee's "The Miracle At St. Anna" examine the prejudices inherent between both races with varying results. Lee begins his jumping off point by wrapping his story around a group of four Buffalo soldiers in World War 2 who end up separated from their unit and involved in a cosmic fight for their lives in a small Italian village. "Lakeview Terrace" places its action in current Los Angeles, but its vision of the social divide is just as violent- and it's no coincidence that the film poises a wild fire just out of view of its character's front porches, inching ever so close as the film winds to its conclusion. The deck seems to have been perfectly stacked for Lee's film to come out triumphant. I've long been a fan of Lee, and his usual visual prowess is on full display here- the spinning camera as characters talk, the direct stare into the camera, his use of long takes during certain dialogue scenes that adds a spark of energy as the camera calmly creeps in- but of the two, "The Miracle of Saint Anna" is the lesser work. And after the massive debacle that was "The Wicker Man", that's saying a lot for LaBute.

"Lakeview Terrace" is not what's advertised. Okay, well it is and it isn't. Starring Samuel L. Jackson as Abel Turner ( a very upright, Biblical name indeed), his life is upset when a young bi-racial couple move in next door. As the new husband and wife next door, Patrick Wilson and Kerry Washington are incredible. They have an easy interaction that translates well, such as the little reaction they both exhale when they realize they're finally "homeowners". It's a playful, genuinely felt moment. Whether it's their happiness or Turner's general apathy for the outside world he sees as an L.A. police officer, the tensions between both of them mounts. "Lakeview Terrace" does evolve into a pretty satisfying thriller, but it's also a nice return to form for director LaBute who made his name with lacerating indie dramas such as "In the Company of Men" and "Your Friends and Neighbors". 90% of "Lakeview Terrace" is talk, and it's just as verbally violent as those previous efforts. With a script from David Loughrey and Howard Korder, LaBute has found an intriguing theme that he can dig at slowly through terse conversations and verbal sniper attacks. Jackson gets to eventually do his Jackson shtick (and I will strike down upon thee... ok not that bad) but for most of its running time, "Lakeview Terrace" handles the confrontation between its two opposing forces with intelligence. I was pretty amazed at how subtle most of the film is. 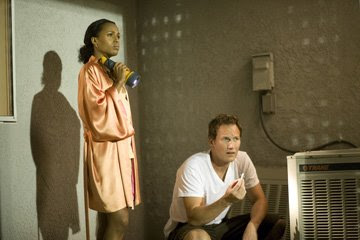 Subtle is not the description for Spike Lee's "The Miracle At St. Anna". And subtlety isn't usually the trade that Lee deals in, yet a good majority of his latest work is clumsy, awkward and forced. Even the ending, which should have ended on a certain moving shot, goes on a little too long and dumbs down its message through over explanation. Typically, I can overlook the forcefulness of Lee's message because, technically, his films are so invigorating and his actors so perfect- but this time the stars are not aligned. Starring Derek Luke, Micahel Ealy, Laz Alonso and Omar Miller, Lee sets his film among the all black regiment in World War 2 known as the Buffalo soldiers. Lost behind enemy lines and forced to hole up in a remote Italian village with a young boy who sees dead people and a village prone to excessive fighting and huge "mamma mias", Lee's film is also heavy on dialogue yet it says much less than LaBute's film. A good number of war cliches are touched upon and the film feels like a desperate attempt to stage something grand when at times), amateurish acting and flashback scenes of racial intolerance threaten to mire the whole thing down in mediocrity. The good things- another lush, moving score from Terence Blanchard that serves as an underlying crest beneath virtually the entire film. Ever since "He Got Game", Blanchard's scores fuels each film like a mini-opera, and that's the case with "The Miracle At St Anna". There's also Lee's minor diversion of flash as he captures the soldiers looking at Nazi propaganda posters on the town walls, giving us a succession of close-up images as a sort of act break. In one of the film's opening scenes, the Buffalo soldiers cross a river where a set of loudspeakers have been set up to broadcast the sultry German voice of a woman spitting virile comments about "the white men allowing the Negros to die". This goes on for a few minutes, cross-cutting between the beautiful blond in a German radio studio, smoking a cigarette as she sexily spits out her rant, and the soldiers listening to her as they march. It's a part of history I've never heard of before, and Lee integrates it into the film as a highly effective set-piece. There are a few moments of greatness such as this in "The Miracle At St. Anna", but far more over-simplification and tedium. 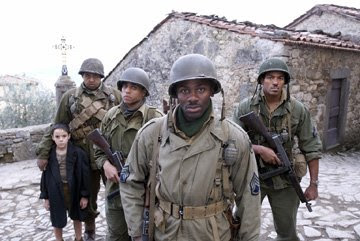 Lee has always been comfortable working with the fantastic. One of the absolute best moments in any film of his lies in that magically realized moment as Jesus Shuttlesworth (Ray Allen) looks up and sees a basketball sailing out of the rafters of the gym towards him, launched from the prison yard by his convict father (Denzel Washington) from states away. It works. It's moving. And it succinctly identifies the cosmic kindred spirit that Lee has built up the entire movie. Some of these elements are at work here in "The Miracle At St. Anna", but they don't resonate. I admired what he was trying to do and really wanted to love this film, but it sinks pretty low on the list for me when compared to other trenchant views from Lee such as "Do the Right Thing", "Clockers" and even "Bamboozled" (a film that deserves a second look today!)
Posted by Joe Baker

Not surprised by your review of Miracle of St. Anna. Especially the part about not ending it right. Spike continues to trudge along long after he should have called it.

I am surprised by your review of Lakeview Terrace. As you wrote, it doesn't seem the movie that is being advertised. What's being advertised is more of a B movie thriller like that one with Russell and Ray Liotta.

But what do I know. I'm just an Evil Clown.

The second I heard Bonecrusher play in the trailer I was done and done with Lakeview Terrace. You're not the first person to tell me lately that the trailer misrepresents the film as a whole. It'll most likely be a DVD rental for me but now I'll make sure it gets pushed up my queue.

Spike Lee is my number one director. Do the Right Thing is the closest to a "perfect" film that I've come across so far. My friend's a history buff and he's been looking forward to this for as long as I have. We plan on going this week. Too bad we'll probably be disappointed. I'll let you know our verdicts.

I'm glad I was wrong about Lakeview Terrace, because I've read so many positive reviews about it. The trailers really turned me off, like Evil Clown said they made it look like a by-the-numbers "protect your house" movie.