Ole Christian Madsen's "Flame and Citron" is a brooding trenchcoat and fedora'd examination of the blurry lines between right and wrong, guilt and innocence... and an especially powerful psychological case study of the tensions that engulfed whole countries during the German occupation of World War 2. Starring Mads Mikkelson and Thure Lindhardt as the aforementioned Flame and Citron (code names applied by the underground resistance group they take their orders from), Madsen's film wedges itself satisfactorily between Melville's "Army of Shadows" and Verhoeven's "Black Book", two of the most invigorating and intelligent films whose primary goal was to highlight the cloak and dagger escapades of the various Resistance groups during the great war- albeit with markedly different effects based on the time they were produced. Verhoeven is certainly aiming for a bit more entertainment value while Melville's 1969 work is a rigorous experiment in quiet deception and suffocating doom. Finding the right mixture between these extremes, "Flame and Citron" is an exciting and ultimately moving treatise on these two uniquely dedicated- and historically accurate- Danish assassins. 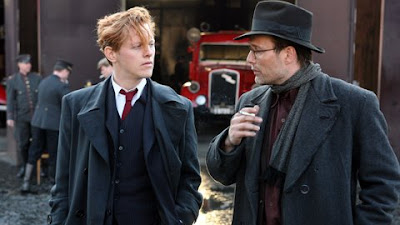 Initially throwing the viewer into an indiscernible chain of events where Flame and Citron are nonchalantly knocking on doors and exterminating people, focus and motivation soon eclipse their seemingly random acts. Outside of their clinically precise assassinations, back story and development gradually gives purpose to both men. Citron (Mikkelsen) has a family, but his honor and sense of duty has slowly eroded that relationship. Flame (Lindhardt), the more three dimensional of the pair, is given contextual and deep seated hatred for his actions against the encroaching German army and SS squad. Yet the film's real crowning achievement (besides its expertly staged action sequences and sense of forbodement) is the dangerous ways it maps out the various deceptions, betrayals and triple crosses. What's a good Resistance film without the idea of any single person being the one who rats on someone else? In "Flame and Citron", the walls slowly begin to collapse on the devoted duo when the directions of their superiors begins to look like personal retribution rather than straightforward homeland security. As the tensions rise, Mikkelsen and Lindhardt do an excellent job of etching the fear on their face. We want these guys to survive, but history- and the reptilian nature of the underground movement- are certainly running against them.

The most lasting effect of "Flame and Citron" is not in the action itself, but in the closing moments. Like the best films based on actual events, "Flame and Citron" provides us with text that deepens and extends the supposed fictional image into reality. For some reason, the end notes on Ketty (Stine Stengade), the love interest of Flame, and the belated recognition bestowed upon Flame and Citron by the U.S. government, resonate more poignantly than in other films of this nature. Also, the use of a voice-over motif that doesn't come into clarity until the final few minutes strikes a deep echo about the way we process and remember harrowing events. In a film that mostly concerns itself with instantaneous satisfaction through bloodletting, "Flame and Citron" is ultimately a moving examination of the life long battle scars that firmly attach themselves with no relief in sight.
Posted by Joe Baker

Hi! I enjoyed reading your blog. Check out my movie label:
http://whereareyouolga.blogspot.com/search/label/movies