The story of Eagle Pennell is a truly tragic one, yet we can always find beauty and redemption in the archived work of a filmmaker (justly) coming to light. After IFC snuck Pennell's 1984 film "Last Night At the Alamo" into their lackluster rotation a few months back, I feel privileged to have seen two Eagle films now. His second film, "The Whole Shootin Match", released in 1978, has been credited as the film that encouraged Robert Redford to launch the Sundance Film Festival. And I can't imagine a better film to watch on a hot July Texas night when it's still 95 degrees at 11pm. 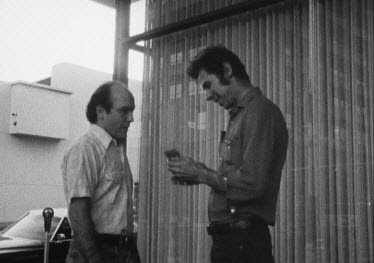 Like most of his characters, Lloyd (Lou Perryman) and Frank (Sonny Carl Davis) are decent southern boys constantly trying to carve a niche for themselves amongst their nights of chasing women and drinking. In "The Whole Shootin' Match", Lloyd and Sonny fare much better than the layabouts in "Last Night At the Alamo", though to be fair, that film is strictly about one night in the life of a closing Houston bar and its denizens. Lloyd is an especially inventive guy, continually creating things out of PVC pipe and metal in his backyard. Yet in his customary fatalistic world-view, Pennell chooses to end this stroke of good luck as a corporate fast-one. The good 'ol boys are taken for a ride and lose out on their patent for a mop by a shady downtown Austin businessman who blinds the guys with a wad of quick cash- cash that Sonny quickly wastes on a suit and convertible. While a small part of the film documents the duo's brave attempts to scratch out a living on the fringes of society, the real gist of the film is their lazy interaction with each other and the women in Sonny's life. While this aspect of the film is highly entertaining and Pennell scribbles out some intently hilarious conversations between these two slow-drawl guys, "The Whole Shootin' Match" is (to me) a much more valuable commodity for its anthropological take on Texas in the mid 70's.

Filmed in and around Austin, Pennell frames a bit of his film in the concrete jungle of downtown Austin (as the previously mentioned scene where the guys sell their idea and get taken) but the majority of its setting is the hinterlands of south central Texas. Largely anonymous dirt roads, backyards and darkened highways, Pennell does evoke a serene beauty during the film's final images of the guys wandering in the clustered hills west of Austin. The clash between good 'ol boy nature and hippie central (Austin, well noted, is known as the most liberal city in Texas) is touched on as well during a scene where the guys attempt to kickstart a new polyuerthane business on a unique house in the Austin hills. Whether he means to or not, Pennell conveys alot about the clash of personalities in his films. More sure of himself in the hazy interactions between drinking buddies than fully realized relationships, "The Whole Shootin Match" does give ample screentime to Sonny's wife (a wonderful Doris Hargrave) and her slow attraction to Sonny's cousin (Eric Henshaw) in scenes that come off funny and real. The act of giving a bicycle to Sonny's young son squeezes alot of mileage out of its simple plot point. Pennell condenses alot of personality in conversations and "The Whole Shootin' Match" is a film full of them. 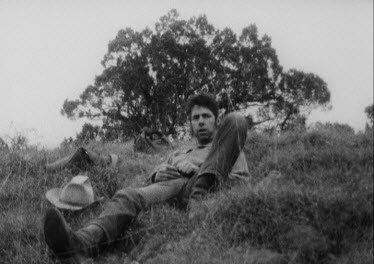 A poignant footnote to my viewing of "The Whole Shootin' Match" was certainly overshadowed by the news of actor Lou Perryman's death just a month or so after this film's DVD release and the virtual excitement being stirred by Pennell's maverick filmmaker status. Watching the scenes towards the end of "The Whole Shootin Match" as Lloyd and Frank dutifully search for lost gold in the hills, yet another unfulfilled get-rich-quick scheme in their never-resting-minds, I kept coming back to the image above as Lou rests on the downslope of a hill with a large tree blotting out the sky behind him. If ever there was a more glorious image of a man at peace with nature, this is it. Again, whether he meant to or not, Pennell and alter-ego Lou Perryman delve into the beauty of the Texas lanscape with a singular feeling for what makes this great state so breathtaking at times.
Posted by Joe Baker