From 1973 to 1975, Robert Mitchum lived and breathed in the world of pulp. In 1973, there was "The Friends of Eddie Coyle". The next year... Sydney Pollack's "The Yakuza". Then in 1975, "Farewell, My Lovely", the third film to be based on the Dashiell Hammett novel of the same name. Maybe it was Mitchum's sad-sack, world weary face that naturally lent itself to the roles of various hoods, stoolies and tired detectives. Whatever the reason for such a powerhouse one-two-three punch, I'm just glad they exist.

The absolute best of the bunch- Peter Yates' "The Friends of Eddie Coyle"- has been newly released on DVD for the first time by Criterion, providing movie enthusiasts such as myself the opportunity to take in a (somewhat) forgotten masterpiece. A low key and almost clinical peek at the underbelly of the Boston underworld, Yates' film virtually renders Mitchum (the titular Eddie) as a secondary character, caught up in his own desperation to stay out of jail at 50 years old and give up his friends and associates involved in some heavy stuff. It's a bold move, but "The Friends of Eddie Coyle" should be seen as a sprawling examination of the mechanics of crime rather than an actual character study. Mitchum is the big name, but the smaller roles are what really flesh out "The Friends of Eddie Coyle" as a dynamic portrait of this particularly dangerous sect of people. Littered with familiar character actor faces (Alex Rocco, Joe Santos, James Tolkan, Richard Jordan, Steven Keats), Yates draws great tension out of every scene. Three bank robberies, a police stake-out in a parking lot, and the final night on the town for Eddie Coyle are supplemented with a filmmaking style that's simple and economic. And this is a film that understands the power of silences. Just watch the progression of shots as Jackie Brown (Keats) waits in a parking lot or the cryptic conversation between Dillon (Peter Boyle) and cop (Jordan) that basically says everything without saying anything. 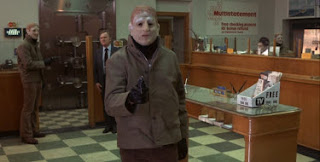 But among this sordid world, there's still Robert Mitchum. He tells you everything you need to know in the opening scene as he describes how he got his nickname of "Fingers" in a breathless monologue. It's a quiet performance that reeks of regret and hard-worn bad luck. And when Mitchum talks or looks into the eyes of the Jordan's slick cop, deciding whether to rat or not, his eyes tell us the whole story. The benefit of time is certainly on his side as an actor. 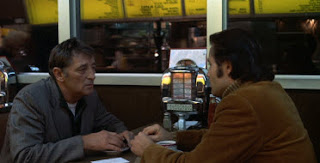 A little less successful than "The Friends of Eddie Coyle" but intriguing nonetheless is Dick Richard's "Farewell My Lovely" (1975). Desperately wanting to mine the same cinematic and critical gold as Roman Polanski's "Chinatown" a few years earlier, this third installment of the great Hammett novel has the artificiality of 40's noir but not the real gusto. As Philip Marlowe, Mitchum is highly watchable, spouting the ironic lines of his weary detective role with half amused energy. The story itself- something about a missing chorus girl and the ties of one powerful family to the very heart of corruption in Los Angeles- were surely monumental in their day, but by 1975 this slick decor had run its course. Part of the minor failure of "Farewell My Lovely" can be found in the abrupt shift film noirs took during the 70's. If "Chinatown" closed the book on mimicking the old style, then "Point Blank", "The Long Goodbye" and "Night Moves" were definitive indicators of the new prevailing winds.... kinetic, self-reflexive and concerned with modern attitudes clashing against old manners. Regardless, "Farewell My Lovely" centers on the bulky shoulders of Mitchum as he trudges across the city at night and slowly segues from one predicament to another. What else do we expect from Philip Marlowe? Yet only Mitchum could probably pull off the meaningful way in which he tosses a baseball back to a little boy whose father won't be coming home. Whether he's playing the stoolie or the good guy, Mitchum has that unique way of making one believe in his actions.
Posted by Joe Baker