Umberto Lenzi is a bit of a low-rent Italian filmmaker, working without the stylish penchant of Dario Argento or the creepy nihilism of Lamberto Bava or Lucio Fulci, and "Nightmare City" is a prime example of his somewhat lazy efforts. A radioactive spill infects people on a plane, and once that plane lands, they escape and unleash a flesh-eating outbreak on the city. Long time B movie actor Hugo Stiglitz happens to be the media man who observes the event, then spends the rest of the film trying to save his wife and escape the city. Not much of a horror film, "Nightmare City" should be on the list for anyone's "trash cinema" film festival night at home. What's better than watching zombies attacking people like roving gangs with hammers and steel pipes? 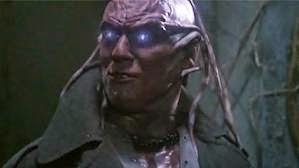 A few months ago, I ﻿lamented that this film wasn't available on DVD, and lo and behold, last week one of the terrific indie labels (Shout Factory) released a nice blu-ray edition. Glad to say it still holds up from my original adolescent viewings.... a bit campy at times but still disturbing through its wonderful creature effects and imaginative mythological narrative.
Undead 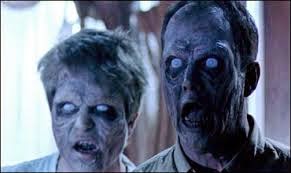 Influenced by the comedic vein of early Peter Jackson and Sam Raimi, the Spierig Brothers' zombie/alien/Aussie Outback thriller "Undead" is a worthy calling card to Hollywood. Originally released in 2003, The Brothers would go on to make the underrated vampire flick "DayBreakers" in 2010. Amateurish in both characters and plot development at times, "Undead" isn't a great film, but it does contain a certain giddy energy and some gnarly zombies with a finale plot twist that's fitting for its rampant narrative.
Posted by Joe Baker