David Ayer’s “Fury” takes a surprisingly fresh approach to the World War 2 war film- the psychological and physical hell of wartime in the belly of a tank. Unfortunately, that’s the only surprising thing in this leaden, hugely disappointing film. As the tank leader lunging forward through Nazi-infested Germany, Brad Pitt fails to register as the tougher-than-nails fatherly figure of his motley crew. For the first time in a long while, I couldn’t get beyond the “Brad Pitt-ness” of his performance. In fact, the only one that rises above his cliché ridden outline is Shia LeBouf as the religious minded gunner. His performance is quiet, introverted and wholly human. Jon Bernthal (playing unhinged machismo), Micheal Pena (the token minority) and the viewer’s identity into the film via the role of Logan Lerman (freshly minted typist-turned-soldier) lunge across the screen with such war film ‘generic-ness‘, its deafening. Ayer makes certain to hit every checkmark on the personality test. Saint Pitt drives his men hard then saves some shivering German women. Check. Forces the newbie to commit an atrocious act and then chalk it up to life lessons. Check. 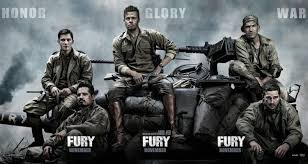 “Fury” also establishes casualties in its confused wartime morality. While rarely painting its American soldiers as honorable or even honest (which is certainly not a necessity of the great war films… history tells us differently about both sides), “Fury” spends a majority of its time elevating the nastiness of its German foes while ultimately bowing to a third act reprieve so egregious, it reeks of strained revisionism. “Fury” is the worst type of propaganda. It walks a straight line between John Wayne-like imperialism one minute then shifts to new age Hollywood liberalism bullshit the next, all the while pretending to be a stout history lesson. But then again, I suppose a tank full of guys led by Brad Pitt is fiction enough for anyone.
Posted by Joe Baker