The struggling artist on film has been an especially ripe subject for filmmakers since the medium learned how to refract the light back onto itself. Alejandro Gonzales Innaritu’s “Birdman” joins that procession, and not only does it create a visually stunning universe of backstage politics and shifting emotions among actors in a New York play, but it pinpoints something deeper in the psyche of leading man/writer Riggan Thompson (Michael Keaton). Battling his own inner demons while trying to maintain the week leading up to his opening night, things aren’t made simpler by his inner voice… a stream of conscience rally that wants him to return to his glory days as action film star Birdman. Thrown into the chaotic mix are controversially edgy co-stars (a wonderful Ed Norton), a daughter fresh out of rehab (Emma Stone) and an arts critic just itching to take down his play because Hollywood actors don’t belong in the theater. “Birdman” balances the natural with the supernatural, sometimes with Keaton’s head games taking over the film. But regardless of its flights of fancy (literally at times), “Birdman” is a real triumph of human emotions, anchored by a tremendous performance from Keaton. 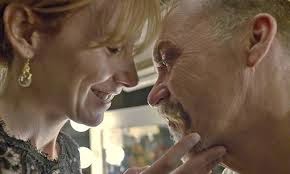 For a film that largely takes place inside the head of its leading man, filmmaker Innarritu adopts the same go-for-broke visual style that exists in our own free-floating noggin. Seamless long takes, gliding tracking shots and magnified close-ups not only give us that dreamlike sense of thoughts and dreams, but it also breaks the barriers of “cinema” and stages everything in theatrical cues. Instead of the curtain dropping, we get a time lapse view of the New York skyline or a deceptively subtle crane shot that places actors in two places at the same time. By film’s end, we not only feel like we know every nook and cranny of the St. James Theater, but the jarring difference between energy inside and out. The emergence onto the New York streets outside are adventures, filled with tense, booze-ridden diatribes and nervous half naked walks, as when Keaton (in the film’s slapstick highlight) becomes stuck outside in only his robe and has to fight his way back in for the final scene. But stylish is one thing. “Birdman” also emanates with genuine depth from everyone involved. Each person gets their big scene…. and Emma Stone’s is the best, tearing into her dad with a rant, then slowly allowing her face to register remorse and confusion. Edward Norton, as the hot shot actor brought in last minute to fill the shoes of another, gives his best performance in a long time, alternating between bullish cockiness and naked honesty. The soap opera melodramatics are dialed up to ten, yet “Birdman” is a serious meta-self exploration, angry at times (even towards the audience) and softly affectionate the next. I’ve seen it three times now and each time something new and startling emerges from it. I can’t wait for a fourth viewing.
Posted by Joe Baker