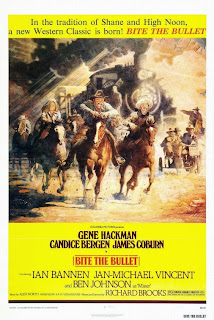 Think of the madcap all-star race films of the 1960's ("Its A Mad Mad Mad Mad World") transposed to the American West with a bit of 70's melancholy and that's exactly what one gets with the Richard Brooks film "Bite the Bullet". Starring James Coburn, Candice Bergen, Gene Hackman, Jan Michael Vincent, Dabney Coleman and Ben Johnson, the film takes place over the course of one week as the various riders race across 700 miles of tough terrain and barren desert. Along the way, they find their feelings for each other, mend old wounds and generally lament about the passing of the Old West... all stalwart topics in the highly revisionist era of the woozy 1970's. Yet "Bite the Bullet" overcomes its oft cliches and ambles into a deeply entertaining, consistently moving exploration of people against nature and the choices we make, good or bad.

Brooks, a filmmaker of great clarity and purpose, made "Bite the Bullet" towards the end of his career after major hits such as "The Professionals" and "In Cold Blood". At first glance, "Bite the Bullet" looks like a gimmick. All those Hollywood stars, dirtying themselves and flying across the screen on horses at breakneck speed. But its the quieter moments that resonate and reveal the film to be something more. Ben Johnson, as the eldest of the riders, easily embodies the 'death of the west' with his world weary gait and seen-it-all-expressions. Hackman, saddled with a bitter past and even more complicated relationship with fellow female competitor Candice Bergen, is the conscience of the film, holding the others riders in check and, eventually, crafting the film's most perfectly imagineable finale. But it's James Coburn who remains as the soul of the film.... his deep voice always spouting reason and uttering the film's most pungent one liners. "Bite the Bullet" (whose title is a bit of an in-joke within the film) might have been assembled from the Hollywood factory as a method to cash in on the various high profile persona, but it far exceeds those superficial beginnings and becomes something terrific on its own.
Posted by Joe Baker