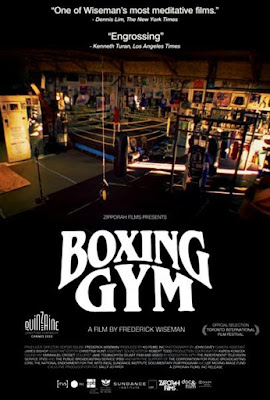 I've always appreciated the (dying) sport of boxing. I can remember watching Friday Night Fights during the summer with my grandfather. I've been to numerous boxing events in my time, continually marveling at the dynamics of the sport... appreciating the thought that goes into every punch and counter punch. In spite of the now dominant MMA, boxing is and always will be a cerebral event that celebrates and awards reaction over action. As he's done with this country's major institutions over the past 40 years, director Frederick Wiseman simply observes the process and the people, tackling the sport of boxing and its rhythmic, at times floating, mechanics with gentle observation. And even though there are very few exterior shots of Austin, Texas revealed in Wiseman's documentary on Lord's Gym, one can sense the tight community and melancholy attitude that dots this unique Texas landscape previously exploited by filmmakers as diverse as Richard Linklater and Robert Rodriguez.

Tucked away off Lamar Avenue outside downtown Austin, Lord's Gym is presented as a cluttered cave of forgotten equipment and retro ideas. Focusing on its owner and trainer, Richard Lord, he comes off as a tough but loving teacher of the sport. When potential applicants come into the gym, Lord espouses the need for boxing as the ability to avoid fighting rather than getting into them. Wiseman culls footage from several facets of the place, from Lord's training of boxers to the average joe who pays his $50 a month application fee and learns timing from the speed bag. There are hanger-ons (including ex boxers) who watch the flurry of activity with punch-drunk sideways glances, moms with their infant babies perched ever so carefully in their cribs on the floor and youths who begin their experience beating on a tire outside. Wiseman molds all of this into his typically systematic editing style that lulls the viewer into the film's hypnotic spell. And when current events slyly work their way into the documentary- as two men discuss the Virgina Tech shooting that is just happening- "Boxing Gym" becomes a metaphor for defending oneself in these chaotic and unsettling times.

Despite its truncated running time (a mere 90 minutes) perhaps the most revolutionary aspect of Wiseman's latest is the way he builds the context of the film, denying the viewer the ultimate pleasure of watching two people fight, training his camera on the friendly interactions between average customers of the gym and their shared camaraderie in the process of boxing over the brute force. More interesting than watching yet another boxing match is the long take of a man and woman shadow boxing separately in the same ring, seemingly unaware of each other. They are both, obviously, deep in thought over their foot work and ability to bounce off the ropes and Wiseman carries this rhythmic dance for what feels like an eternity, giving us yet another transcendent moment of live lived rather than fictionalized. Shots of the University of Texas and the Austin Capital do make their presence, eventually, in "Boxing Gym" but they're dwarfed by Richard Lord's benevolent monologues and the denizens of his gym.
Posted by Joe Baker

Interesting post! Boxing is a famous sport to get involved in, there's no age limit or level of fitness.