One of the more underrated directors of the 70's and 80's, Frank Perry has worked across a wide swath of genre and mood, rarely leaving behind his laid back Southern California vibe no matter how dark the material... although Perry himself was a New Yorker by birth. Two wonderful films in the late 60's, "The Swimmer" with Burt Lancaster and "Last Summer"- which is a remarkable and hard to find ensemble of teenage beach bum lifestyle marred by the encroaching malaise of adulthood- are morally ambitious and thematically pregnant efforts. In the 70's, Perry helmed several highly regarded films including "Rancho Delux" and "Diary of a Mad Housewife" before moving into rather outrageous territory with "Mommie Dearest", "Compromising Positions" and the Shelley Long comedy "Hello Again" (anyone remember that?). But in between these high points of a long career, there were smaller, lesser known works such as a raggedly vicious portrait of the iconic western figure Doc Holiday with Stacey Keach as "Doc" or a 70's indie favorite by many filmmakers about a woman's descent into madness with "Play It As It Lays". Also in the mix was "Man On A Swing".... Perry's entry into the detective-whodunit series with a twist of the occult thrown in for good measure. 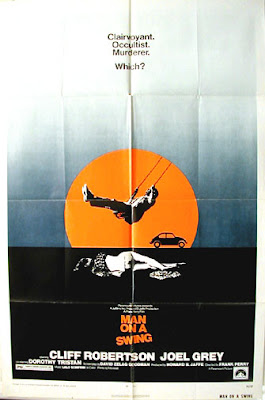 Starring Cliff Robertson, "Man On A Swing" begins with the discovery and ensuing investigation of a local girl found murdered and left for dead in her vehicle in a strip mall parking lot. It's not long into the reconstruction of the crime that Robertson receives a phone call from a local man named Franklin (Joel Grey) claiming to be a psychic with important information about the murder. The psychic reveals numerous previously undisclosed details about the murder scene and events leading up to it, which causes Robertson to use the man as a possible lead. Quickly, "Man On A Swing" discards the typical progression of the murder mystery involving the girl and focuses its attention on the psychological battle between psychic and skeptic. In a wonderful performance, Cliff Robertson runs the gamut of emotions from extreme guilt of not being able to crack the case (especially when another dead girl turns up) to angry dissidence when his attempts to debunk the psychic powers of Franklin fails. There's also some telling humor, such as the scene in the film's opening when a local police officer, chauffeuring Robertson to the crime scene, flips on the siren. Without looking away from the window, Robertson mumbles "turn that shit off..." That single line of dialogue tells more about the gruff humility and lazy informality of the man (and the town) than any other establishing shot.

The terrific thing about the film is its unique unpredictability, giving equal screen time to both cop and psychic. As Franklin, Joel Grey portrays the dichotomy of his character with ease. When he slips into a trance or becomes extremely nervous over the unexpected "test" set up by the police chief, he becomes a bundle of nerves and high strung energy. When living a normal life, he becomes even more menacing in silent ways, as if he's a prophetic minister jockeying for his own church. Like "Zodiac" and countless other serial killer films, the real tension is in the nuanced details and probing glances of seeker versus hunter. I'm not quite comparing "Man On A Swing" to the caliber of Fincher's masterpiece, but it is a hugely neglected film that deserves more attention. And the ending, which confidently hinges an ambiguous final scene between Robertson and Grey, does carve out room for its own place in the annuls of haunting, thought provoking conclusions.
Posted by Joe Baker