The Francesco Rosi Files: Lucky Luciano and Many Wars Ago

In "Lucky Luciano" and "Many Wars Ago", Italian director Francesco Rosi continues his exploration of Italy's evolving landscape both past and present. Through the gangster genre and the war film, it's also safe to say he's no less angry in documenting the rise of unchecked power across a fifty year span.

Like he did with "Salvatore Guiliano" almost ten years previously, Rosi takes on another powerful criminal figure, using only his name and legend as a jumping off point for something more devious and conspiratorial. But unlike the character of Guiliano, longtime Rosi collaborator Gian Maria Volonte does get a majority of the screen time as the titular Luciano... albeit in very drab moments of political corruption. If one is looking for the pulp aesthetics that were generating waves out of Hollywood in the likes of "Capone", "The Godfather" and "The St. Valentines day Massacre", "Lucky Luciano" is a different beast. There are a few moments of gunfire and bloodshed (mostly aimed at Rod Steiger in his supporting role when he rocks the mafioso boat), but Rosi's aim is for something more intelligent. Picking up when Luciano (Volonte) is deported from New York back to his homeland in Italy, the film charts the American Army's involvement with corrupt businessmen and politicians in rebuilding that country's infrastructure. Though still a target for American intelligence forces, Rosi portrays Luciano as the puppet master of Italy's financial rebuilding through shady real estate dealings and the overall influence of his Mafia network. In typical mosaic Rosi style, "Lucky Luciano" bounces back and forth in time tracking several strands of the mobster's life and the confluence of police forces slowly observing his every move. 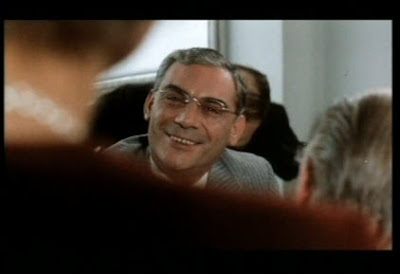 Stylistically, "Lucky Luciano" is a very energetic affair. Utilizing a roving camera that repeats several lateral pans, first across the faces of a group of Italian women enjoying themselves at an army dance then later across the gruff faces of mob bosses as they're introduced- in a sly echo of Scorsese's "Goodfellas" some 17 years later- the film feels kinetic. Even when the situation is static, such as the scene of two heads of state discussing the eventual untamed powers of Luciano if something isn't done, Rosi frames the ceiling overhead as an impending force of nature. Much more than any of his other films, mood and composition takes on a secondary feeling in "Lucky Luciano". And one understands this was all a success when, in the final scene as Luciano falls to his death of a heart attack, it's clear that his tight fist of control over Italy's complex future is sealed.... and suddenly the door slamming shut on Michael Corleone in "The Godfather" makes for a rapt comparison with Rosi's more muted effort.

Rosi’s inaugural film of the 70’s, “Many Wars Ago” is his answer to the war movie… albeit a very angry and, unsurprisingly, proletariat depiction of Italian troops during World War 1. Focusing on one unit during their numerous failed attempts to charge on the entrenched positions of the German army, “Many Wars Ago” details the minutia of war, such as the five minute sequence which portrays the inevitably deadly task of soldiers cutting apart barbed wire. It’s only after the first attempt, when both soldiers are killed by opposing fire, that the superior who ordered the push realizes the wire cutters are too dull to get the job done. At first glance, this seems like black comedy, but Rosi treats the impending mutiny of the soldiers against their commanding officers with dire seriousness.

And it’s that inequality between officer and soldier that lies at the heart of “Many Wars Ago”. For the first hour, the film tracks several men, both officers and soldiers along the wintry front line. Gian Maria Volonte, who would work with Rosi for many years to come, immediately appears as the protagonist before he’s killed in battle. The focus soon narrows on General Leone,(Alain Cuny), a beast of imposing will and unnerving invincibility. Even when his lieutenant, Sassu (Mark Frechette) tries to lure him into a spot with a perfect view from the enemy sniper, the general walks away unscathed. Slowly, the psychological conflict between Sassu and Leone boils over into full blown mutiny. The second half of “Many Wars Ago” examines the obstinate battle of wills between the men, ending in typical fatalistic Rosi fashion. It would make for a perfect double feature with Stanley Kubrick's "Paths Of Glory".
Posted by Joe Baker