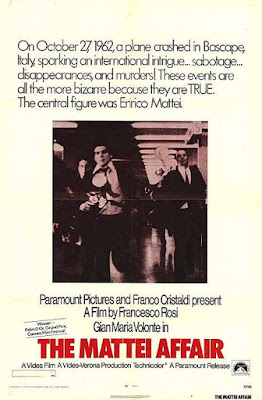 My appreciation for Francesco Rosi just continues to grow. The Italian director who tackles themes of government corruption without resorting to oblique paranoia.... or highlights the mafia in the most unique manner ("Lucky Luciano", featured in a later post)... and creates moving dramas of brotherhood without the slightest sense of mawkishness ("Three Brothers")... he incisively avoids genre conventions while creating films that intelligently pick apart some of Italy's greatest scandals and bureaucratic failings.

In "The Mattei Affair", Rosi trains his lens on Enrico Mattei, Italy's answer to Daniel Day Lewis in "There Will Be Blood". Growing to power in the 50's as the premier researcher and developer of the country's deep deposits of methane, Mattei eventually became a powerful figure in Third World oil development. Played to dry perfection by Gian Maria Volonte, "The Mattei Affair" trades in words and long speeches instead of action. Rosi spirals together several strands of Mattei's life, before and after the mysterious plane crash that took his life in 1962. Not only do we see Mattei's early attempts to wrestle power from the oil magnates with his cheaply produced methane alternative, but the film tracks the day of the actual plane crash, complete with droning soundtrack music and confusing excerpts of dialogue and investigations as well as the attempts by reporters and writers in the years after his death to ascertain the truth. It all culminates in a clinical examination of good hearted intentions turning internationally dangerous when politics and human wealth clash. 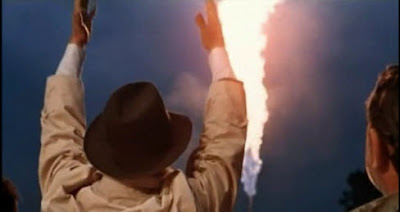 Often criticized as being a visually boring director (although there are several stunning tracking shots in his 1962 film "Hands Over the City"), "The Mattei Affair" features a unique visual schematic, none more so exciting than the stationary shot of a 17 story building slowly turning on its office lights as news of Mattei's death burns across the wire. Or the dusk shots of methane being pumped from its deposits and Mattei confidently holding his arms up in a sign of victory which surely prompts the viewer to echo the manic determination presented in P.T. Anderson's "There Will Be Blood".... a film which surely cites Rosi's effort as its antecedent. But in the end, "The Mattei Affair" is a haunting documentary of sorts that merges cinematic life with real life when one of Rosi's researchers, a man named Mauro de Mauro disappeared and never resurfaced in 1970 after obtaining snippets of one of Mattei's last speeches. This sidenote, touched on obliquely in the film, resounds as one of the mysteriously deft touches Rosi often brings to his exceptional films of dynamic national struggle... one that seems to say no one gets out alive.
Posted by Joe Baker