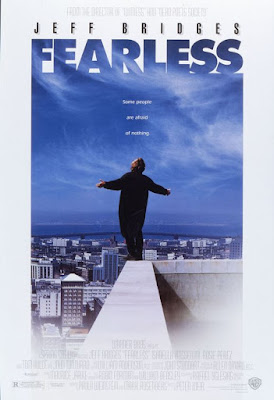 Peter Weir, like the best directors, is a chameleon, able to adapt and change his point of view to align with a wide variety of projects. He's also Australian, but a film like "Fearless"- which trades in deep grief and remorse- is a supremely universal idea. Starring Jeff Bridges as a plane crash survivor who walks away from the crash, saves a dozen others, then drives to a hotel and sleeps for days is immediately set up as a conflicted character. Is he suffering from amnesia? Is he shell shocked? We soon find out that he's probably all of these, but he has also come to the realization that he may be invincible, scoffing at the grief support groups that fellow survivors attend and standing on the edge of a high rise building, daring God to kill him. The tone of "Fearless" is, well, fearless. It's also a film that deals with some very dark moments. As a fellow survivor, Rosie Perez spirals into a deep depression at the loss of her infant son during the crash. There's an especially pungent moment during one of the grief counseling sessions (led by psychiatrist John Turturro) where a flight attendant confronts Perez and offers her condolences. Throughout the film, Weir and screenwriter Rafael Yglesias, give us harrowing glimpses inside the plane before the crash and this same flight attendant instructed Perez to buckle herself up first then hold tightly onto her baby. "Everything will be alright". It's a recurring statement throughout the pre-crash chaos that haunts most of the survivors post-crash. I can only imagine the horrific nightmares and memories one would have after such an event, and "Fearless" isn't afraid to go deep beneath the surface and mine the jaded emotions of Bridges and Perez.

Weir, director of such films as "Picnic At Hanging Rock", "Gallipoli" and "Dead Poets Society" is an interesting figure. Rotating between art house fare and more mainstream efforts, "Fearless" seems to find the best of both worlds. It plays like a guilt-chamber piece directed by Ingmar Bergman one second then an idiosyncratic indie romance the next. As Bridges' suffering and confused wife, Isabella Rossellini brings strong gravity to the outsider's view on the catastrophe. She watches her husband spend hours upstairs in his study drawing unique pictures and facilitates between the idea of wanting to cure his erratic behavior and furiously wondering if he's having an affair with Perez. If nothing else, 'Fearless" is probably the best example of post traumatic stress disorder one could imagine. And the ending- if you haven't seen it- is a gut punch that stands as one of the most moving finales of the last two decades.