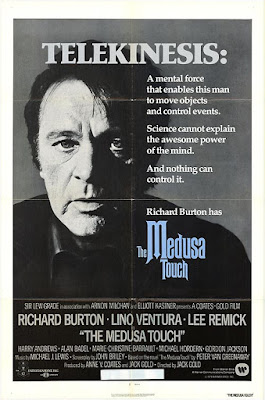 Jack Gold's "The Medusa Touch" would make a fine double bill alongside Jerzy Skolimowski's "The Shout". Both films feature confused men who believe their inner thoughts and outward emotions can cause disaster and death. While "The Shout" is certainly more of an avant garde affair, "The Medusa Touch" is a Saturday afternoon type of serial that plays inoffensively with its heavy subject. In fact, director Jack Gold did most of his work in television, and "The Medusa Touch" is specifically lacking in cinematic qualities. This doesn't mean it's bad by any stretch of the means, it just trades in a flat, matter-of-fact editing and visual style that loses nothing in translation from big screen to small. And with high caliber stars such as Richard Burton, Lee Remick and Lino Ventura, "The Medusa Touch" understands that name recognition is the way to go.

A novelist (Burton) begins a therapy session with a psychiatrist (Remick) in which he discusses his ability to cause mayhem through telekinesis. His history and story-within-a-flashback (including his admissions to Remick) are gradually investigated by a detective (Ventura) after he's found murdered in his apartment. Ventura, as the pesky, dedicated detective receives the largest amount of screen time, and it's his perspective on the supposed mystical ability of Burton that fuels the story. But unlike "The Shout" which casts an aura of psychological wonder over the whole affair, "The Medusa Touch" is much more simplistic and fairy-tale like. The denouement, which features a crumbling church on scale with the hokey disaster films of the 70's, lays no doubt at the feet of Burton's psychic powers, reveling in the destruction of collapsing paper-mache blocks and overacting on behalf of the poor minions stuck inside the building. Again, "The Medusa Touch" does not strive for serious art-film acclaim. It's fun, weirdly different and a great example of a great actor slumming a bit.

My experiences with Burton and Ventura are far more knowing than that of Remick. Recently spotlighted on TCM in a variety of roles, her performance in "The Medusa Touch" is especially interesting. As the cold, calculated, buttoned-up psychiatrist who is forced to keep Burton's secrets, she exudes a simmering tension. The narrative eventually explains this tension, but it's a good performance in a film that could have easily been overshadowed by the thespian precision of Burton. Sadly, "The Medusa Touch" has been lost in the annuls of home video. Like the previously highlighted post on Kenji Fukusaku's "Virus", "The Medusa Touch" is big, goofy Saturday afternoon fun.
Posted by Joe Baker