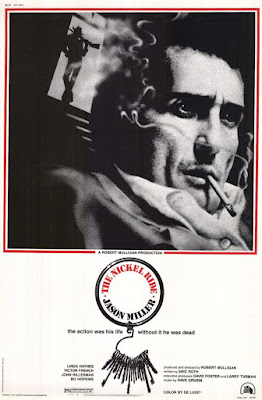 Jason Miller is not a widely known figure in the history of movies, but after his well positioned role as Father Karras in "The Exorcist", Hollywood was ripe for the taking. What he did next was star in a minimalistic crime picture for an aged Hollywood filmmaker (Robert Mulligan of "To Kill A Mockingbird") that received poor words from the New York Times upon release and died an obscure death... and its still unavailable on any type of home video distribution. But perhaps "The Nickel Ride" is best experienced without any advanced hype. It's a gangster film without any real gangsters. It's a Los Angeles-filmed picture that highlights the seedy section just outside downtown Los Angeles, refusing to glorify any picturesque portions of the city. And it's a crime movie that fills itself with hushed words about some shady business deals without ever really exploring the vagaries of this crime syndicate's purpose. Sure, there are moments of violence towards the end of the film, but even those are suspect as to whether they actually really happen. "The Nickel Ride" is a film full of contradictions, and that alone makes it a worthy entry in the lost pages of 70's cinema.

If anything, "The Nickel Ride" would make a great double bill with John Cassavete's "The Killing of a Chinese Bookie". Both are films that delay the inevitable for a low level crime boss. Both films feature lead characters who circle the bounds of reality and eventually become trapped in over their head. And both films certainly understand time, place and character over genre can be an exhilerating method of storytelling. The basic idea in "The Nickel Ride" is this: as Cooper, Jason Miller is a low level crime boss struggling to keep his 3 or 4 square block empire from fading into obscurity. He's working on a deal for his boss (John Hillerman) that will create a row of empty warehouses where the syndicate can park and store stolen goods. The deal is not going well, and Miller huffs and puffs with desperation throughout the entire film, trying to stave off the possible hitman (a wonderful country hitman played to perfection by Bo Hopkins) that he believes his boss has dispatched against him, as well as protecting an old friend in debt and his young girlfriend (Linda Haynes) who rarely understands how deep Cooper's involved. The way in which Mulligan and screenwriter Eric Roth (later writer of "Ali", "Munich" and here his first script) portray the dying gasps of Cooper to save his business are fascinating. If we didn't know any better, we'd think Cooper was trying to save his hardware store, not a criminal empire. "The Nickel Ride" is almost exhausting in the way Cooper hustles through his days, finding a payphone to make calls, checking at a hotel where his contact never shows up, staving off the worries of his girlfriend with a weekend in the country.... "The Nickel Ride" is probably one of the best examples of just how fucking hard it must be to run your own criminal world. Add to all of this Cooper's deteriorating mindset due to paranoia, and the whole film is hazy stumble towards the inevitable. It's a brilliant one as well.
Posted by Joe Baker