The direct cinematic lineage of Michael Mann and Jean Pierre Melville can be found in one little known film from 1959 called "The Great St. Louis Bank Robbery". Made a few years before Melville created an international splash with films like "Le Doulos" and "Second Breath" and decades before Michael Mann stepped behind a camera, John Stix's "The Great St. Louis Bank Robbery" takes as its main themes some very familiar touchstones of these two varied filmmakers- the consummate career criminal obsessed with detail, the fatal relationship with a woman and brazen masculinity. It's a shame that director John Stix didn't get the chance to accumulate these themes and form the same type of stylistically riveting career as Mann or Melville. 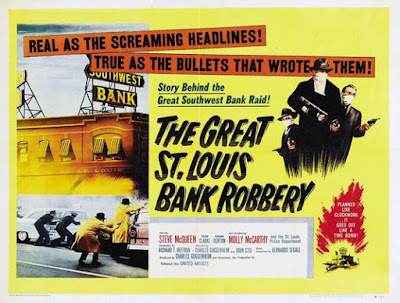 "The Great St. Louis Bank Robbery" is a genuinely fatalistic enterprise. The very opening scene, where four men meet in a cold park, is doomed from the outset as their buried resentments, jealousy and inexperience (in the case of college drop out wheelman Steve McQueen in only his second film role) comes boiling to the surface. Add to the mixture an almost repressed homosexuality in ring leader Egan's eyes (Crahan Denton) as he tries to steer the group away from any outside influences (women namely) and judiciously go over every detail of the robbery and one soon gets the idea that we're watching walking corpses going through the motion. The tension comes in the thought of who will survive, if anyone. In essence, "The Great St. Louis Bank Robbery" is 80 minutes of careful preparation and ten minutes of abrupt violence during the bank robbery. Outside of the bank robbery itself, there are several scenes in "The Great St. Louis Bank Robbery" that feel revelatory for 1959. The long shot on Egan as he monologues about the death of his mother... an especially terse scene with McQueen's ex-girlfriend as the crew find out she may know about the robbery... and the aforementioned final bank robbery in which Stix precisely frames and edits the robbery with calm detail, giving precedence to the shadows that steel bars create on the ground or the tormented God shot as McQueen terrorizes a husband and wife. And, the fact that actual police officers and detectives involved in the real-life incident reprised their roles is even more revealing to the film's search for the authentic.

Stix, a Julliard film teacher and director of numerous Broadway plays, never returned to film after "The Great St. Louis Bank Robbery". Perhaps because he was born in St. Louis and wanted to share some hometown flavor with the movie-going public, his debut film struck lightning in a bottle. I would've loved to see what else he could do with the cinematic medium, and especially with the gray-skied and fedora'd criminals who slink beneath the surface and patiently study until they strike. If "The Great St. Louis Bank Robbery" is any indication of his intelligence, we've all missed some great stuff.
Posted by Joe Baker