Both in music and on film, there’s something definitely happening here. Between the pop-psychedelic sounds of bands such as Animal Collective (Beach Boys meets Pink Floyd) and the more straight-forward 60’s tinged rock of Edward Sharp and the Magnetic Zeros, Camera Obscura and King Khan, the 60’s are in full swing and littering our modern cultural landscape. Two recent films, “Taking Woodstock” and “Inglourious Basterds”, also recall the swinging 60’s in tone and tongue-in-cheek ‘hipness‘. I guess the 70’s retro hangover is finished and we’ve all gone hurtling back to peace and love. Or did all of this begin in the late 90’s when tie-dye and the peace symbol made a roaring comeback?

Of the two films mentioned, Ang Lee’s “Taking Woodstock” is the direct link to the 1960’s. Tackling the mammoth cultural event that was Woodstock in 1969, Lee’s film starts out large and scatter shot, then gently narrows it focus on the nuclear family and the generational gap that divides young Elliot (Demetri Martin) and his Jewish-immigrant parents played by (an over-the-top) Imelda Staunton and Henry Goodman. At times kitschy and wholly unbelievable, Elliot is little more than a cypher of his times. Due to the placement of his parent’s dilapidated motel in upstate New York and his own role as the head of the Chamber of Commerce, he is the catalyst for a group of hippies being displaced in town after town to put together their live concert. Motivated partly out of economic hardships and mostly out of Elliot’s own discomfort with his sexuality, Woodstock is finally given a home just two miles from him. History is condensed and tweaked- for example in one short walk to the festival, Elliot (and the audience) are given visuals of a guy holding up a sign that says “Please show up Bon Dylan”, the three nuns who flash a peace symbol for a camera, and a cop with a flower placed gently into the visor of his helmet. All the iconic images of three days of peace and music are given lip service in a 90 second single take. All that’s left is for Elliot to walk by the young couple wrapped up in a blue blanket. Regardless of Lee and screenwriter James Schamus’ commercialised ploy to wrap everything into a tidy, uncomplicated bow, “Taking Woodstock” does work as a film though. 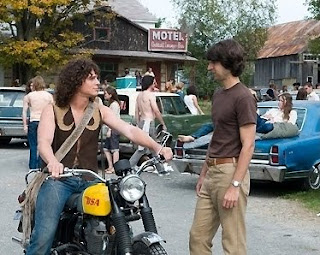 As the film’s focus shifts away from Woodstock to the odd coming of age of Elliot, it elicits some honest emotion, especially in one scene between Martin and his father. Liev Schreiber, in a role as a sort of transvestite guardian angel, adds immense generosity in a role that could have easily been played for straight laughs throughout. Even though “Taking Woodstock” wants to be a modern time capsule for the late 60’s (which, honestly, the original “Woodstock” documentary already encapsulates) it should mostly be remembered as yet another strong Ang Lee character piece about a young man struggling with his own identity. 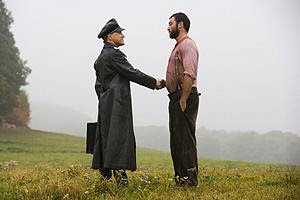 Less successful in its attempts to mar the genres, sounds and sensibilities of the 1960's is another hollow pastiche by Quentin Tarantino. Yes, even though the film does take place during World War 2, the film’s magnificent opening (which it never quite recovers from) distinctly places us in the world of Sergio Leone and his spaghetti westerns. And the finale (the second strongest portion of the movie) plays out like a fevered exploitation film that would feel right at home in the canon of Jesus Franco. It’s just everything else in the middle that wears out its welcome. Tarantino is obviously in love with the written word, but as in “Deathproof”, it’s his bloated screenplay that sucks the life away from any cinematic momentum in “Inglourious Basterds”. In his vain attempts to transpose the exploitative aspects of 60’s cinema (scribbled, crashing opening titles and vintage Universal logo) there’s no real zap of originality. I have no doubt that Tarantino has something truly unique in him, and when he creates that film- a film completely free of the pseudo homage and lip service to every worn out/wacko VHS movie he watched back in that Los Angeles video store- then it’ll really be a trailblazer. But, until then, “Inglourious Basterds” will remain a hazy throwback to the 60’s that marginally entertains.
Posted by Joe Baker