Dead and Not So Buried: Jennifer's Body and Other Flesheaters

I don't usually flock to the theater when a movie as maligned as "Jennifer's Body" opens up. But, some good word of mouth from fellow blogger and friend Chris, who consistently burrows through the good and bad horror movies with subversive tastes, called me and said I had to see this film. I didn't hesitate, and you know, "Jennifer's Body" is a helluva good time. 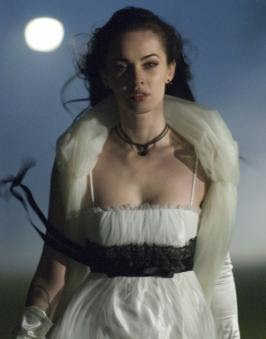 Directed by Karyn Kusama from a script by Diablo Cody, alot of the seemingly misanthropic feelings against "Jennifer's Body" seems to revel in the fact that it's not a very scary movie. Having only seen the previews that seemed to convey the outright hotness of lead star Megan Fox over any other genre (since, yes, nowadays lady hotness is a genre unto itself) I went into the film with very little expectations of gore, scares or social commentary. As a clean slate, the film works very well. After opposing vehemently to the cutesy triteness of Cody's previous Oscar winning script "Juno" (please... really... a 15 year old girl is going to love Mott the Hoople!?), her sense of amusing one-liners and "what's up, monistat" sayings spin a uniquely humorous staccato speak and response in the (somewhat) vapid world of high school. In short, Fox and co-star Amanda Seyfried toss these pieces of dialogue out with sincere believability. I also laughed my ass off (out loud by the way since I was the only one in the theater) when Fox, levitating off the ground with rage in her eyes, calls Seyfried a "playa hater". The lasting effects of playful horror cult cinema- whether it be a terrifying take on high school menstruation in "Carrie" or lurid soap opera murder in "Heathers"- are present in "Jennifer's Body". Now, I'm certainly not comparing Kusama's work to either of those films right now. But, in a decade or so, I could easily see "Jennifer's Body" being rediscovered as an overlooked good time with nothing but fun in mind. And maybe getting a rise out of its few violent moments of flesh-eating by uber hottie Megan Fox.

A few notches down the gross-out meter sits Marcel Sarmiento and Gadi Harel's "Deadgirl". Poised with none of the tongue-in-cheek looseness of "Jennifer's Body", this is a very ugly film both visually and tonally. The idea- that two high school guys (already on the fringe of society) break into an old mental hospital and find a naked girl chained to the table in a secret room... and then keep her there for their own sexual satisfaction!- is startlingly original but repugnant due to the shallow script and D level acting of its no name stars. Imagine Larry Clark dipping into the waters of "Saw" and you get a slight sense of "Deadgirl's" empty high school wasteland. The two misunderstood loners, Rickie (Shiloh Fernandez) and J.T. (Noah Segan), trade braindead conversations while having moments of moral clarity over their chained sex toy. School jocks are brought into the situation. Then we learn that the deadgirl was probably chained there for a reason since her bites turn anyone into a similar zombie. Highly regarded at last year's Fantastic Fest, "Deadgirl" is most likely a film only appreciated at horror film festivals long after the chimes strike midnight. Watching it on a purely sober level without the ebb and flow of an eager audience, it amounts to very little more than another tepid attempt to cash in on the graphic success of human suffering ala torture porn. It also has the chutzpah to tease us with a sequel in the final frame. While I'll jump at the chance to see "Jennifer's Body" again (and program it for viewings at any upcoming parties or willing friends), the thought of seeing "Deadgirl" in another incarnation is soul-crushing and depressing.
Posted by Joe Baker