Abdel Kechiche's "The Secret of the Grain" belongs to that rare sub-genre of international cinema that patiently observes a way of life with unwavering naturalism and empathy. While more than two hours of this 153 minute movie concerns itself with the various interactions and tensions that arise over the dinner table with an immigrant family living in France, it's never boring and certainly never wears out its welcome. And when a simple crime surfaces in the final ten minutes, it's not only a crushing revelation to the family patriarch Slimane (a bottom-feeding but very humble character), but its treated by director Kechiche as if the very fabric of time and space has been ripped apart in a quiet explosion. Watching it, I was consumed by anger... disturbed by the seemingly passive manner of laughter by the young criminals, and ultimately overtaken by compassion for Slimane (Habib Boufares). Like the movies of the Dardennes brothers (or, most pointedly, De Sica's classic "The Bicycle Thief"), "The Secret of the Grain" exposes us to the tenuous underbelly of life where a minor inconvenience for us registers as an earth-shattering assault on the lower class 'others'. 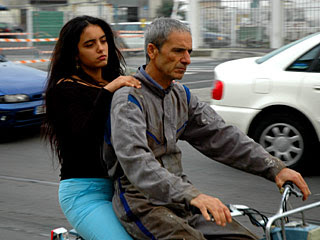 But, I'm allowing my praise to get ahead of me here. Set in modern day Southern France, Slimane is the central figure to a large family. Quickly after losing his job though, he embarks on refurbishing a boat and opening a couscous restaurant. We follow Slimane and are slowly introduced to his large family (over Sunday dinner, of course) where the camera restlessly conveys the passion, trust and (at times) dissolution of the various family members. Slimane is divorced, occasionally seeing his overbearing daughter but preferring the company of his girlfriend and her daughter Rym (a miraculous Hafsia Herzi). Slimane is subdued, introverted and Rym dotes on him like the father she never had. It's their relationship that soon overshadows everything else in the film. They dress up and attempt to gain the proper licenses and permits to open the restaurant, yet only encounter the nastiness of that thing we call bureaucracy. Then, through a stroke of business ingenuity, Slimane prepares a party for big spenders and city officials to gain support and backing for his idea. But, trouble arises and Kechiche strings out the final dinner party to almost unbearable proportions as a small mistake soon envelops the whole family and Slimane especially.

As previously mentioned, "The Secret of the Grain" builds up strong camaraderie between the viewer and its characters. While some may find Kechiche's filmmaking style pretentious- such as the scene where Slimane's daughter in law suspects her husband is cheating on her and she explodes on Slimane in a scene that rolls on for several minutes in an exhaustive array of screams and tears or the final belly dancing scene- for me it all made sense. I was immediately drawn into this world... its messiness.... its complete abandonment of usual character development... it all felt like the best of John Cassavates where we watch people dissolve and bounce off each other through laughter and talk. It may not be a defining idea, but "The Secret of the Grain" hits all the right notes. And the food looks incredible.
Posted by Joe Baker