The Con Game and the New Cool

In the most recent copy of "Film Comment", writer Phillip Lopate examines the abilities of film-goers (but more specifically, the film critic) to reverse their initial opinion of a given movie. We all have those moments. I can remember the first time I saw "Boogie Nights" and it left a general "meh" feeling over me. Some initial thoughts jotted down for others to read was disparaging.... something about a Scorsese knock-off. Then, after witnessing the magisterial brilliance of "Magnolia" two years later, I went back and re-watched "Boogie Nights" and the cribs from other movies didn't feel so blinding. There's the stunning Little Bill long-shot... the sharp flashes of emotion that ring through.... the Sister Christian scene which still builds up incredible tension when viewed today... P.T. Anderson was simply working on a different level than everyone else at the time and that lost me a bit. Now, after recently watching Rian Johnson's "The Brothers Bloom", I felt extremely tempted to go back and watch his debut film, "Brick", and give it a second chance. His sophomore film is a con film, yes. It's hard to take anything seriously because you're searching for the elusive lie behind the images. Yet, "The Brothers Bloom" is such a well-crafted film, entertaining (and yet idiosyncratic) in every respect and visually sumptuous that I feel like I missed something in his first film. Any filmmaker with this much talent to burn deserves a second chance. 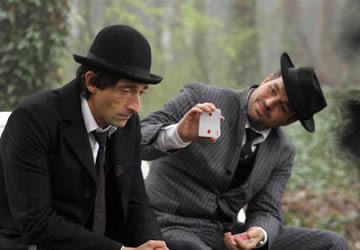 Starring Mark Ruffalo and Adrien Brody as grifting brothers who choose the eccentric but wealthy mark played by Rachel Weisz, "The Brothers Bloom" establishes itself right away as another entry in the cinema of "New Cool" as I call it. Director Wes Anderson being the godfather of this movement, of course, Johnson employs some of the same stylish techniques (whip pans, cutesy acoustic music, vibrant color schemes) but creates characters and a story that feel all their own. Perhaps too whimsical for some, I absolutely loved the way Johnson films Brody and Weisz falling in love through a simple dolly tracking shot as they walk the streets of Prague, disappear behind a row of stone pillars, and re-emerge holding hands. Self conscious and definitely aware of its coolness, "The Brothers Bloom" doesn't beat one over the head with it though. Keeping the sweetness intact between child-like Weisz and impressionable Brody as the story (and con-game) grows convoluted is the single masterstroke of Johnson's "The Brothers Bloom". Their relationship isn't a con, and that makes the whole thing work. Also, as in "Brick", Johnson keeps the eye entertained by a shifting pastiche of costumes and time, as if he's ingested more film noirs, Hollywood musicals and David Mamet plays than Quentin Tarantino. While the black suits and shades worn by the brothers remains consistent throughout, there's a great scene towards the beginning of the film where we think the action is happening in some burlesque in 1920's Chicago, and then the brothers emerge in broad daylight on a graffiti-filled rooftop overlooking a very modern downtown. Again, some of the images in this film are breathtaking. But if there's one fault to be had, it's more of my own pre-conceived disappointment than the film itself. I kept waiting for that one great set-piece that never comes. Most con films rely on this, and "The Brothers Bloom" zips by so fast from con to con, that we barely have time to register a point or outcome. Regardless, Johnson's intention may be more on the relationship between Brody and Weisz and Ruffalo than anything else. In the way "Brick" was a high school tale told through the prismatic notion of a hardboiled film noir, "The Brothers Bloom" could be a family drama played out against the shifting diversions of the grifter's tale. Johnson seems to relish telling small stories against the fabricated backdrop of embedded narrative styles. And with "The Brothers Bloom" he does this magically. 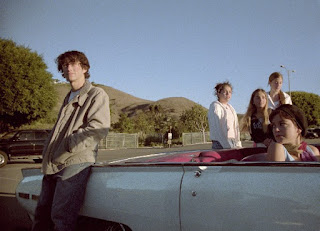 So, this leads me back to "Brick", Johnson's 2006 debut starring Joseph Gordon Levitt as a high school kid caught up with some seedy 'gangsters'. Perhaps it was the hype. Perhaps it was the stilted, manufactured dialogue. I went into this one with some anticipation, and came out supremely underwhelmed. Watching it again today with some perspective, I realized just how wrong I was. Carefully composed as if every shot where framed within an inch of its life... that crazy good scene in the parking lot... the lovingly rendered and modernized way Johnson has taken the film noir and turned it completely inside out... how did I possibly miss this upon first viewing? At least I now understand the error of my ways. Thankfully, the movies do exist with revisionist history. And, if you haven't seen either film, I urge you to do so (one on DVD and the other currently in release). I suspect that Rian Johnson will be a name I echo many times around these parts.
Posted by Joe Baker

I haven't seen "Brick" yet, so I only understand "The Bros Bloom" half of your post.

I agree with your account of the movie, although I don't really understand what you mean by the "set piece" that most con movies rely on? Or is this something personally related on? I felt like the film was fairly focused on a large, complex con involving Penelope's money, until it gets twisted at the end by Diamond Dog.

Anyway, lovely to read your take on the film.

I meant that most con movies (such as any Mamet or heist film) usually feature that ONE tension filled set-piece. "The Brothers Bloom" was one long con, understood, but I kept waiting for that perfect scene where mood, music and editing comes together to rattle the nerves. Weisz's break-in to steal the book comes close, but its played more for laughs than anything else. Again, this small quibble is built more from my own expectations than anything else.