The rising tide of emotion over Tony Scott's remake of Joseph Sargent's "The Taking Of Pelham 123" is reaching the climactic cry of "why"? There are its admirers and certainly its detractors (plus more harsh words). As an unabashed Tony Scott fan, I'll certainly give it a look, aware of its tricked up cinematography and amplified square off between a goateed, menacing John Travolta and a subdued Denzel Washington. This is not the original... a film which deserves its rightful place in 70's cinema as a hard-edged, no nonsense hostage film that looks even trendier today than I'm sure the grit and grime of 1970's New York did upon initial release. 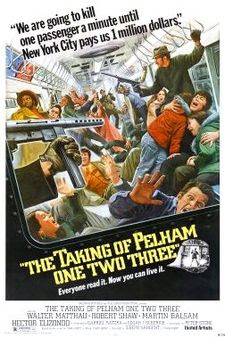 For anyone who says director Joseph Sargent provided a "workmanlike" effort on "The Taking of Pelham 123" needs to look a little closer. From the opening exterior shots of the hostage-takers silently assembling in the subway station to that sublime and impeccably humorous final freeze frame, Sargent's film is wrapped in auterist moments. Take also the first (and last) images of criminal ringleader Robert Shaw, introduced through tapping, impatient feet in a subway station and ending on a self destructive tap of the shoes on the underground electric track. With the exception of the tracking shot that follows a cat into a dark doorway, up to a pair of shoes, and eventually to the half-hidden face of Orson Welles in Carol Reed's "The Third Man" as he picks up the cat, I can't think of a more inventive introduction to a main character through an almost throwaway moment. Great stuff. And back to Shaw himself. As the good guy transit detective, Walter Matthau does his lumbering best to imbue every scene with the world-weary nonchalance that made him famous, and it's a harmonious collision when he and Shaw finally begin communicating through the train's radio. Decisive, intelligent, well organized and brutally efficient, Shaw creates a purely evil bad guy out of (basically) thin air. It's always the icy, quiet person who embarks on the killing rampage, and Shaw embodies Mr. Blue as a man who never raises his voice but gets exactly what he wants. It's an understated performance, but one that grows on you with repeat viewings. Here's a well-drawn villain because we understand everything has been planned down to the inch. With preparation like that, it's all tone of voice and steely gaze and Shaw carries it out with perfection.

Then there's the tension generated by the film. There's little action- one car chase that ends just as quickly as it begins and sporadic gun fire- yet "The Taking Of Pelham 123" carves its place in the niche of 70's cinema alongside other thrillers (paranoid or otherwise) that understands atmosphere, acting, pacing and dialogue are the keys to success. With their limited screen time, Jerry Stiller, Martin Balsam, Hector Elizondo and Dick O' Neill resonate long after their supporting turns as guys trapped on both sides of the hostage crisis. And then there's that final scene.... intriguing because we don't expect Sargent and screenwriter Peter Stone to fully evolve the story beyond the actual titular action. But they do. And it lands on that cat-like grin of Walter Matthau as his long day comes to an end. With that, "The Taking Of Pelham 123" immediately re-assesses itself as a study of good overpowering evil. In it's small way, New York City is saved again.
Posted by Joe Baker

1. That poster will eventually find it's place on my wall. I swear to it.

2. Thank you for taking the time to write about one of my favorite movies ever. It's a classic and more people need to realize that it doesn't star John Travolta.

3. I'm curious to see what you think of Marathon Man.

I do admire "Marathon Man"- the 'is it safe?' scene stayed with me for days. I love the whole sub genre of Nazi hunting films of the 70's, my favorite being "The Odessa File". If you haven't seen it, I highly recommend you do.