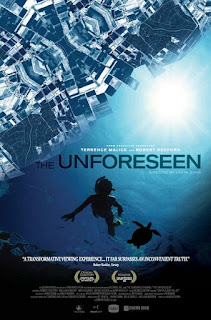 The idea of a documentary about the impending collapse of a nature reserve due to housing development and urban sprawl sounds amazingly dry, but in the hands of documetarian Laure Dunn (and executive producers Terence Malick and Robert Redford), the notion suggests something close to riveting crime scene analysis. In the late 70's, the boom of Austin, Texas poised an interesting dilemma- continue to grow as the state's capital and expand through modern architecture and urban development or maintain its "country family" outlook with a few dashes of liberal (i.e. environmentalists) state of mind. The center of attention for "The Unforeseen" becomes Barton Springs, the largest natural spring water pool in the United States, located in an area that comprises over 300 acres south of Austin. As Austin grew and suburban housing developments became a modern way of slicing up the land and morphing into a metropolis, the city was faced with a dire situation that pitted government against the lowly voter. A political tug of war ensued into the late 80's as the film carefully charts the ebb and tide of manipulative funding institutions, development Realtors, common folk who reminisce about a Barton Springs before pollution, and even George W. Bush. If it's about the evils of Texas politics, then you can be sure W makes an appearance.

But even though Dunn's sympathies are clearly laid out from the beginning (why else make a movie about this??), she does a respectable job of presenting some gray areas as well. The film begins with the life story of Gary Bradley, a West Texas real estate developer who gets in over his head with the housing market in Barton Springs. Inching closer and closer to bankruptcy as the fight over Barton Springs dovetails over the years (and eventually martyred as the scapegoat when the banking and loans crisis hits in the late 80's), Bradley still isn't painted as the big bad corporate guy. Dunn portrays him as a man who simply wanted to make his mark in his homeland state and give something back to the land that nurtured his farming family as a child. In this regard, "The Unforeseen" becomes an even handed examination of the problem. And when Bradley sheds a few tears over the experience, it doesn't ring hollow. Even though I personally have never been to "Barton Springs", I feel a little closer to it's natural landscape and the battles that have given it new life.
Posted by Joe Baker

I hadn't ever heard of this film but now I'd like to track down a screening or a DVD copy.

Austin is such an interesting town. Smack dab in the middle of G.W. Bush territory and yet their indie music and indie film scene is really impressive.

It's avalaible on DVD. Shouldn't be too hard to find.

You know, last night I logged on to Netflix and it was the first recommended film for me. Haha. Not hard to find at all.