70's Bonanza- Save the Tiger

There's something ultra cool in the way films from the 70's seemed to pervasively nail the breakdown of the American middle class. Whether it was the effects of Vietnam, political scandals like Watergate or the oil embargo, 70's cinema seemed especially angry and the new Brat filmmakers exploited those outward emotions to devastating lengths. In "Save the Tiger", Jack Lemmon is yet another cog in the upper middle class wheel, suffering through the worst day and a half of his life. He owns a textile marketing factory in the heart of Los Angeles. From the opening, a 15 minute bedroom conversation between Harry Stoner (Lemmon) and his wife (Patricia Smith), its evident the malaise is deeply rooted. Harry awakes with a scream, sweating and obviously glad to be out of his nightmare. He rumbles around the room, gets dressed, laments the fact that he should've been a pitcher, and dutifully goes to work. He meets his partner and best friend, Phil (Jack Gilford) at the office where they pick up a conversation that must've ended hours ago. Harry wants to get in touch with someone named 'Charlie' so he can pay the man to torch a second factory he owns to get out of an impending IRS audit since he and Phil have cooked the books. Phil is morally against this decision, yet he still tags along with Harry to meet the arsonist at a porn theater. And that's all before lunch. "Save the Tiger" grinds the viewer down as it doggedly tails Harry through the day as he juggles his business and his own personal breakdown. Besides the little matter of a felony such as arson, Harry speaks at a fashion luncheon for his line of clothes and becomes increasingly disoriented. He begins to imagine the audience are dead soldiers he fought with in an unmentioned war (probably Korea). One of the film's best scenes, it slowly inter cuts the baffled, confused snobby fashion audience with frighteningly haunting white faces covered in blood and bruises. For the sheer entertainment value of watching Lemmon squirm, you can do no better than this scene and his performance in "Glengarry Glen Ross". And to even further complicate his maddening day, Harry is responsible for setting up a prostitute with a high-end client which ends in an emergency call to the hotel room when the client suffers a heart attack. I couldn't help but imagine P.T. Anderson had to be thinking of this scene when he threw in his own prostitute/hotel/death scene in his debut film "Hard Eight". Both feature an extended long take which shrouds the scene in mystery. The only bright spot for Harry's day falls on the shoulders of a hitchhiking hippie named Myra (Laurie Heineman in a touching and sweet performance) who exposes him to pot and free love. Whether this is a good thing for a guy on the verge of a nervous breakdown is another matter. 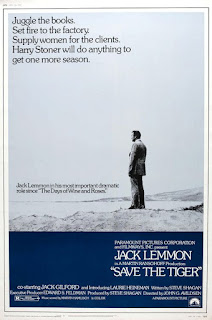 The success of "Save the Tiger" (whose title does represent something brought up along the narrative) lies within Lemmon's performance, and he throttles the tumultuous emotions bubbling inside Harry with brutal perfection. Directed by John Avildsen, the workmanlike crafter of later feel-good hits such as "Rocky" and the "Karate Kid" movies (!), has caught my eye with two hard edged films about upper middle class men crashing into the glass wall of America's dirty underbelly. His second film in 1970, "Joe", starred Peter Boyle as a racist, hippie-hating blue collar man who befriends and pushes rich family man Bill (Dennis Patrick) to violent extremes when his drug addicted daughter gets lost in the Greenwich Village underground scene. Both "Joe" and "Save the Tiger" feature a later generation family man rubbing shoulders with the counter culture, albeit with drastically different outlooks. While there's optimism for Harry Stoner, who leaves his hippie girl one nighter with a smile on his face after she insists he has "a good day", the counter-culture is openly detested and used as vigilante prey in "Joe". Taking both films as a whole, Avildsen was clearly searching for the obtrusive impact of one generation on another. "Save the Tiger" is no less savage against the older generation, but at least it goes a little easier on the counter culture.

"Save the Tiger" is available on DVD.
Posted by Joe Baker