The First of Eastwood's One-Two Punch?

It's probably an understatement, but isn't it refreshing to see an American filmmaker working at the breakneck speed of Clint Eastwood? It's like having our very own Takashi Miike. This year is no different with two Eastwood films set to appear within two months of each other. And if his first, "Changeling", is any indication of the raw power that we're dealing with here, then I expect great things from "Gran Torino".

But, back to "Changeling". This is a great movie. It'll be easy for some to dismiss "Changeling" as mediocre sap because Eastwood trades in such big, outward emotions. The loss of a child here (and with "Mystic River" from a few years ago... a film I still believe to be one of the finest of this decade), suicide in "Million Dollar Baby", a doomed late-life relationship in "The Bridges of Madison County"- all of these topics are ripe for satire in a lot of circles. But with Eastwood, he means it. Economical almost to a fault, his films require you to recognize and embrace the base emotions in life. Sure, there's some allegory, but mainly he just wants to tug at the heart strings and present stories about life, loss, redemption and courage. "Changeling" pretty much covers all the above. As the persecuted and emotionally distraught mother, Angelina Jolie carries the film remarkably well. She effectively paints her character, Christine Collins, as a woman divided by the circumstances in her life when her son goes missing and the police return a boy who she doesn't believe to be her son. In the first half of the film, Jolie renders Christine as a diminutive figure... so much so that when she follows police up the steps of the Los Angeles station, she almost disappears against the swarm of black umbrellas and suited men around her. And before that, her first phone call to the police is handled with riveting delicacy as her voice gently cracks when she tries to explain her son is missing. Whether this was a conscious decision by Jolie and director Eastwood or one of those harmonious cinematic coincidences remains to be explained, but it's a beautiful moment that underscores the desperation of the scene. Then, when the second half forces Christine to rise up against the big wheel of police corruption, she admirably delivers in that respect as well. Bottom line, I wouldn't have any problem seeing Jolie nominated for an Academy award. 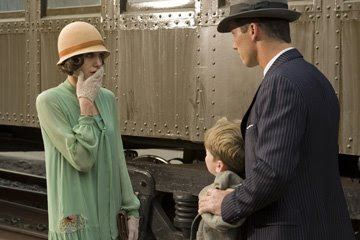 The common complaint I've heard about "Changeling" is it's unfocused attention to several different storylines. Eastwood takes swipes at the medical system, a Rush-Limbaugh like religious pundit (John Malkovich) who flocks to the aide of persecuted Jolie, and an especially gruesome police investigation of a serial killer. In the end, all three aspects of "Changeling" converge into a convincingly moving examination about loss and hope. From first frame to last, this is a film that kept me engaged- engaged in the performances, engaged in the narrative turns and fully absorbed in the epic panorama of Eastwood's Los Angeles circa 1928. It's becoming vogue to praise anything that derives from the hands and eye of Eastwood, yet "Changeling" fully deserves the respect.
Posted by Joe Baker