In a year of terrific performances from around the globe, the absolute best may very well be on the small screen. As John Adams- lawyer, proponent of freedom, oral instigator, pioneering political head and the eventual second President of the United States- Paul Giamatti immediately wraps your interest around his dynamic performance. No less galvanizing, though, is Laura Linney as Abigail- wife, mother, confidant and backbone. Together, they make Tom Hooper's 7 part HBO mini-series a treasure to behold. Saying this series had me from the first episode is a bit misleading. Being a historical nut, I'd read parts of the David McCullough biography the series is based on, but visualizing it and placing modern actors inside the convoluted life of Adams is another thing. Yet, from the opening moments and ensuing grand courtroom speech, "John Adams" is a stirring achievement. Watching the fire in Giamatti's eyes as he delivers certain speeches or the compassionate reaction shots of Linney- this is really a love letter to their long marriage... a marriage interrupted by war and duty, but a marriage nonetheless. 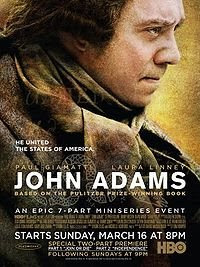 Don't expect a large scale epic that concerns itself with bloody battles of the Revolution, though. In fact, during the actual fighting, John Adams was an ambassador in foreign lands, scurrying around trying to understand the gaudy customs and mannerisms of France or swerving through sickness in gloomy Denmark. "John Adams" is, instead, a low-key character driven reflection of this great man's tireless pursuit for American Independence. While ancillary characters such as George Washington (David Morse), Benjamin Franklin (Tom Wilkinson) and Alexander Hamilton (Rufus Sewell) are given brief interludes, the focus of this series is squarely on Adams and his relationship to Abigail first and foremost and then his best friend/enemy Thomas Jefferson (a wonderful Stephen Dillane). And the fact that "John Adams" can maintain such a fierce intensity with words rather than bullets is a direct compliment to the production values and Emmy award winning performances that drive the central themes.

While some may look at the dry nature of the series and ignore it (9 hours about a president? no thanks!), I'm not sure what more I can say. Either this type of thing is your bag or it's not. Regardless, if one gives it a chance, I guarantee the series' intricate plotting, warm acting and emotionally involving storyline (especially the final episode that evoked a small lump in even my throat) is more interesting than 75% of the 2 hour movies released so far this year. "John Adams" is yet another towering example of the illuminating creativity being generated on the small screen.
Posted by Joe Baker