Unintentional Double Bill: Army of Crime and The Way Back

Robert Guediguian’s “Army Of Crime” and Peter Weir’s “The Way Back” exemplify two of the most prolific and popular genre threads of the second World War: resistance and incarceration. In fact, it could almost be believed that the select few survivors in “Army Of Crime” morph into the headstrong and resilient escapees in Weir’s brutally harsh drama about seven people trekking 4,000 km to freedom. 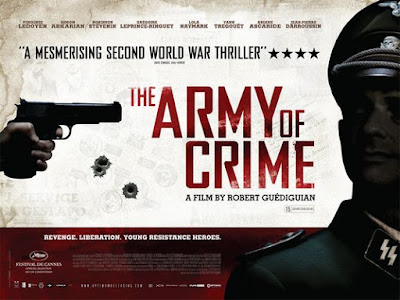 Upon first glance, “Army Of Crime” seems like a reductive title and all the more derivative for its mimic on the great Resistance film by Jean Pierre Melville’s “Army of Shadows”. But as Guediguian’s film later offers, the title comes as an ironic pitch of freedom, taken directly from the propaganda quotes plastered on posters by the German Army. While the initial reading of the title seems to infer the Resistance group, led by Armenain poet Missak (Simon Abkarian), are condemned for their violent acts, the reading of this famous quote at their quasi trial and conviction evolves into a rally cry of patriotic crusading. Still, all that rhetoric aside, “Army Of Crime” is an immensely moving and lovingly crafted documentation of the very origins of the French Resistance, led by foreign immigrants and Franco-Jewish outcasts. There’s the aforementioned cell leader, Missak, trying to shelter his beautiful wife (Virginie Ledoyen in a great performance) from the possible consequences of his actions. He leads several young men into retaliation missions around Paris. There’s Marcel (Robinson Stevenin) a promising swimmer who can’t control his hatred of the German Army and carries out solo assassinations by himself. His fourteen year old brother Simon (Leopold Szabatura) is also caught up in the violence. The sensitive young Thomas Elek (Gregoire Leprince-Ringuit) discovers just how hard it is to throw a grenade into a brothel. Like “Army of Shadows”, Guediguian’s film tracks a myriad of characters where deception and snitching is only a step behind. But whereas Melville’s film was a hermetic examination of the militaristic structure of the Resistance, “Army Of Crime” backs up a few years before there was a strong structural foundation. “Army Of Crime” also does a terrific job of showing the hard consequences this rag-tag band of freedom fighters brought upon their families. The mother of Thomas Elek doesn’t partake in crimes herself, yet she loses her business when the collaborating French police ransack her restaurant. Her only comments on the situation resonate when, after seeing Thomas come home late one night, she remarks that she knows he’s safe now that he’s home and she’s glad his actions are part of a larger conscience. While “Army Of Crime” largely concerns itself with the well edited and exciting sequences of violence and subterfuge, it also carries an enormous amount of respect and emotion for the more mundane details in these people’s lives.

Fatalistic from the very opening scene, there’s little doubt for the livelihood of this small Resistance group in “Army Of Crime“. As the end credits suggest, only three of the men and women survived the war in concentration camps. “Army Of Crime” is a hugely overlooked entry in the genre of World War 2 Resistance films. Shown as part of the Rendezvous With French Cinema series in New York in March of last year, it received a marginal release in theaters but has found its way onto a sunning Blu-Ray edition.

Peter Weir’s “The Way Back” gives a select few of these imprisoned people a small slice of hope. As the film opens, young Janusz (Jim Sturgess) has been condemned as a Party conspirator by his very own wife and sentenced to the harsh confines of a work camp in Siberia. He struggles through daily life until an escape plan falls into his sights. With an aging American (Ed Harris), a violent Russian thief (Colin Farrell) and several others in tow, Weir’s film is a trip though the most uninhabitable part of the Eastern world as the men travel towards freedom in Mongolia and then eventually India. Partly financed by National Geographic, Weird does his best to frame the film in a stately manner, revealing the incarceration by nature with extreme force. His main visual trope, though, does work as he commonly pans around the edge of a mountain or sand drift to reveal the characters slogging through an endless sea of blowing snow or heated sand dunes. While the characters themselves are mostly stock, “The Way Back” is an invigorating tale of survival that never holds back easy sentiments. There are key deaths and grisly ideas hinted at (think cannibalism). The ending is a bit stretched, yet it somehow works and adds depth to the main character of Janusz and the single-minded determination of his group of escapees to die free men.

Perhaps the best link between both films here is the enduring wish to give familes a reprieve from the seemingly hopeless environment of Europe during World War 2. For Missak in “Army Of Crime“, it’s the simple wish that his wife will survive and have a child. For Janusz, his long trip is all about redemption and forgiveness. Yes, both films place themselves in the murky and amoral times of war, but as “Army Of Crime” and “The Way Back” show, the only tangible motivation is the preservation of human life for generations to come.
Posted by Joe Baker