70's Bonanza: Alice In the Cities 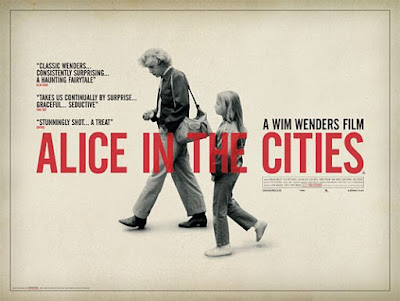 Wim Wenders "Alice In the Cities" could be considered the first in a long line of films that deal with the search of.... something. Released in 1974, next would come his opus travelogue film "Kings of the Road", followed years later by men and women wandering the continent in diverse efforts such as "Paris, Texas", "Don't Come Knocking" and especially "Until the End of the World". Wenders common narrative device is the travelogue film and no one does it quite like him.

Starring Rudiger Volger, "Alice In the Cities" deals with that standard 70's and 80's storyline about the adult saddled with a precocious young 'un. But the difference here is the film's utter lack of emotion. Volger does bond and seemingly come to care for the 9 year old girl (Yella Rottlander) left to him unexpectedly by a woman he befriends while waiting for a plane ride home out of New York, but Wenders style is disassociation with feelings. When the young girl leads her guardian on a wild goose chase to track down her grandmother, Volger's reaction is one of quiet frustration, followed by a stirring of his coffee and then a "ok, what next?" Like the observational exactitude Wenders shows in the film's many passing car window shots (by great DP Robby Muller), "Alice In the Cities" not only lays a profound blueprint for the sensibilities of Wenders the director, but it's a quiet film that revels in the settling relationship between two people through conversation and body language. 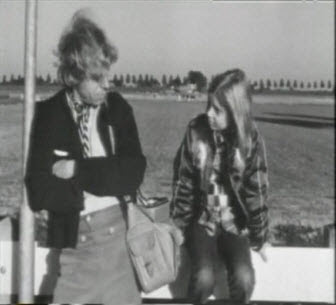 While "Alice In the Cities" does traverse the great shores of America, through the admitted ugliness of Amsterdam by its two lead characters and eventually into the boroughs of Germany, it's mainly an internal film about Volger's failed journalist. In the opening of the film, we see him addicted to snapping Polaroid shots of mundane items as he travels by car to New York. Once there, we learn his publisher is furious at the fact that all he has to show for his bounces around the U.S. is a box of photos. His notepad, full of "scribblings" reveals no story. He holes up in a hotel room, annoyed by the continuous rantings of TV commercials and talk radio and smashes his television set on the floor. So, naturally, the prospect of towing a 9 year old around the world with little or no direction on how to find her relatives seems like an inviting chore for Volger. And it's in this emptiness that "Alice In the Cities" begins to manifest a sincere appreciation of story. The ending, both uplifting and subtly moving, sustains the idea that the journey is often times more rewarding than the destination. As in "Alice In the Cities", this is an idea Wenders has been reworking magically for decades.

This film is not available on Region 1 DVD.
Posted by Joe Baker