While I wasn't a huge admirer of Nobuhiko Obayashi's smash cult success "House" late last year, his work has been on my radar now. Anytime a virtual unknown is rediscovered and given a proper Blu Ray Criterion release, my cinematic senses spike. Obayashi has had a long and varied career and with the second film I've been able to track down entitled "Girl Of Time", its clear Obayashi loves creating modern fairy tales that blend extra terrestrial leanings and robust (sometimes awkward) humor. 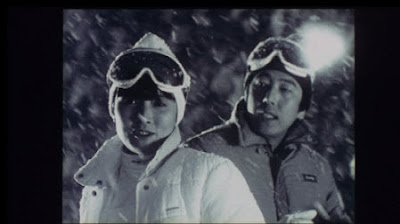 Released in 1983, "Girl Of Time" (aka "The Little Girl Who Conquered Time") spins the same type of story involving innocent students becoming embroiled in something sinister... this time without spinning decapitated heads and eerie cats. In fact, "Girl Of Time" feels like one of those movies that would have fit nicely into the Disney channel's Saturday night stable of mildly weird kid movies i.e. "Something Wicked This Way Comes" or "The Peanut Butter Solution". It's sweet at times, visually unique at others, but ultimately moving in its depiction of young girl Kazuko (Tomoyo Harada) who, after school one day, accidentally breathes in the fumes of a broken chemical in her school's laboratory. She soon realizes that she's living one day ahead in time, able to see future calamities and save them from happening to her classmates. She has a crush on an older boy who isn't what he seems to be, continually disappearing to pick flowers. All of this is handled with a delicate, languid pace that develops the relationship of Kazuko and her two male friends with a gentleness. The sci-fi aspect of the film is hinted at, but the real motivation seems to be that awkward stage of budding young love that disorientates space and time naturally. 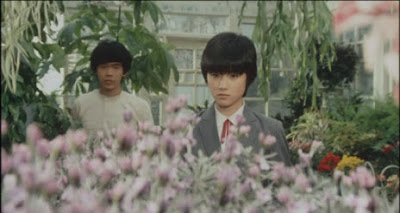 "Girl Of Time" is not available on Region 1 DVD, but if one looks hard enough and wishes to develop their viewership of a challenging Japanese filmmaker, it can be found.
Posted by Joe Baker