Chris Eska's "August Evening" feels like a seminal Texas film. In capturing the humid, lazy evenings of Southeast Texas and those beautiful orange skies that temporarily pop up in the summer months, "August Evening" speaks volumes about a certain lifestyle. But things can also be hard in this idyllic setting, as the film soon reveals. After the death of her mother, Lupe (Veronica Loren) and her migrant worker father-in-law Jaime (Pedro Castaneda), leave their small shack and bounce back and forth between family members in San Antonio as they desperately try to find a place in this quickly evolving world. Lupe, once married but resistant to meeting anyone new for oblique reasons, forms a relationship with Luis (Walter Perez) that develops in patient, gentle ways. 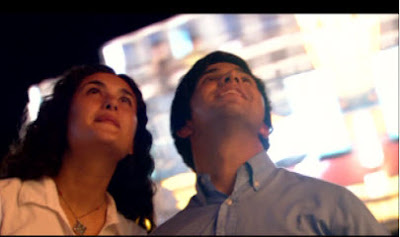 The initial reaction to "August Evening" is to lump it in with other films that document the rough struggle of Hispanic men and women to fit into the American sideline of life. But a majority of the men and women in Eska's film have already successfully adapted and conquered the hardships of this transition. Jaime's daughter, Andrea (Grisel Rodrigues) is married to a rich white man... so busy with her own life that she doesn't even spend a day at home with her father after the funeral of her mother. And when Jaime and Lupe travel to San Antonio, she gives them shelter for a few days, but finds that putting up with two more people in their luxurious house is too much of a chore and shuttles them off to Victor (Abel Becerra), her brother. Victor's situation is just as stressful, compromised all the more when Lupe mistakenly allows Victor's youngest son to wander away from the house... a plot device that spells out just how vastly different life is from their country shack to the cosmopolitan San Antonio. The main point of "August Evening", while drawing out small sketches of personality in its well-drawn characters, is that life is hard in America, but it's even harder amongst this individual family. 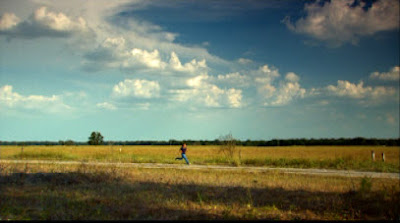 Filmed in the mid-Sothern parts of Texas such as Boerne and Gonzales Texas (i.e. the hinterlands south of Austin and north of San Antonio), Eska nails the laziness these parts of the exude. And while the brilliant sunsets and humidity leak off the screen, most realistic is the sound of crickets that swells and dies off in one scene. Anyone spending any time in Texas surely understands that unmistakable chorus. Released in 2008, "August Evening" was a feature in South By Southwest that year after winning the John Cassavettes award at Sundance in January. The award, which recognizes the best feature made for under $500,000, gives filmmaker Eska a bright future, but once one watches "August Evening", the proof is right there on the screen.