Well, the 2010 baseball season is over and my Rangers juts ran out of gas against a very good (and perhaps underrated) Giants team. This is definitely the worst time of year for me. There's just a huge void that arrives at night while channel surfing. No baseball anywhere. In honor of the 2010 season, here's 5 five films that prominently feature the sports ballpark. 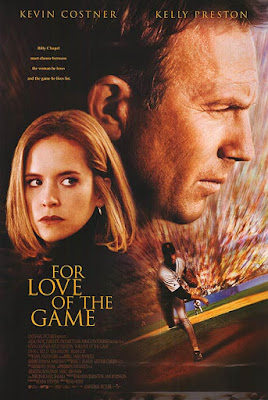 5. For Love of the Game- A very good, and largely ignored, Sam Raimi film that spins a love story in flashback as an aging pitcher (Kevin Costner) pitches a perfect game. Psychological terror, to be sure. I don't know what it is about Costner and baseball films, but they just always work magnificently. It's not a perfect film by any stretch of the word, but it's constant inter cutting between the actual game, Costner's thoughts on the past 4-5 years of his life, and the mistakes he made in a relationship with Kelly Preston, all build up to an emotionally exhilarating finale. And it features John C. Reilly as a catcher. Rent it today with "Bull Durham" and "Field of Dreams" and really pine for the 2011 baseball season. 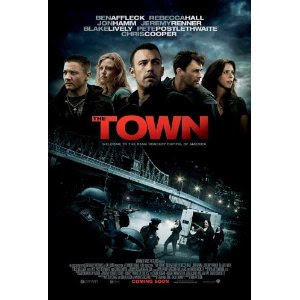 4. The Town- While I found Ben Affleck's film to be a lazy, exhaustive crime effort, it does have the brass to place its final heist in the bowels of historic Fenway Park. The overall impression is doomed a bit by Affleck's incomprehensible editing and directing of the shoot-out, but it still remains an interesting locale for a been-there-done-that trope. Boston overall is the choice du jour lately for crime movies, and "The Town" banks on its most cherished site to end with a bang. 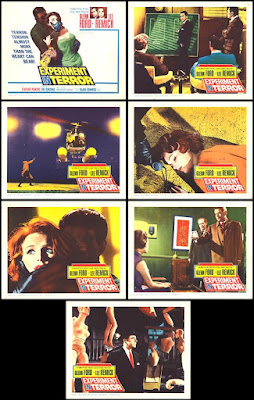 3. Experiment In Terror- Yes, Blake Edwards did much more than comedies and "The Pink Panther", and this obscure little 1963 film is outstanding. Cited as a major influence on David Lynch, "Experiment In Terror" is basically like watching a Lynch film from 1963. From the town name of Twin Peaks to the emergence of a sinister killer in a bathroom that echoes that of Robert Blake's white-faced weirdo at a party in "Lost Highway", "Experiment In Terror" feels like a film way ahead of its time. And the use of San Francisco's Candlestick Park towards the end of the film between killer and victim (a wonderful Lee Remick) uses the crowds of a baseball park efficiently. How many times have you lost someone in a crowd and looked around as the sea of people wash you one direction? Edwards uses this confusion to heighten the tension. A great film. 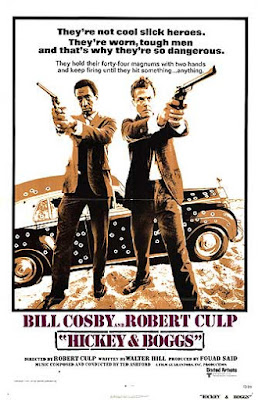 2. Hickey and Boggs- Actor and star Robert Culp directed this grimy early 70's crime film with great veracity and it shows in the film's setpiece at the Los Angeles Coliseum. Private detectives Culp and Bill Cosby are on the hunt for a girl and a suitcase full of money. So are local Los Angeles hoods and they all culminate in the empty Coliseum stadium the day after a Rams game. It's a brilliantly edited scene that has people spying on other people, intricately cutting between bagman, detectives, snipers and the cautious girl with a suitcase. I had to rewind this scene twice just to marvel in the fluid exposition of silent dialogue cut short by rapid gunfire. Sadly not available on DVD, "Hickey and Boggs" is a terrific edition to the lazy, sunlit noirs of the early 70's L.A. like "The Long Goodbye" and "The Nickel Ride". Watch for it on TV. 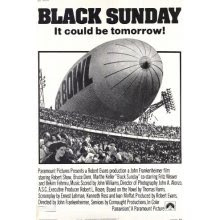 1. Black Sunday- Did anyone really doubt Frankenheimer's "Black Sunday" would be left off this list? Probably the ultimate paranoid sports movie in the history of film, Bruce Dern is gangbusters as a warped blimp pilot out to kill everyone during the Super Bowl. Intertwining footage of Super Bowl X between the Cowboys and Steelers with fictional footage using thousands of extras, Frankenheimer's "Black Sunday" is a marvelous capstone to the over-the-top disaster films of the 70's.
Posted by Joe Baker

You think those are terrifying - wait til the Cliff Lee bidding starts in earnest!

Anyway... it is too bad about the Rangers - I've liked them quite a bit for a couple years now, and was very happy to see them winning - I hope they can keep Lee and Vlad and all... this time of year can be a bit empty - though the free agent stuff can give it some kick. Though that's probably a lot more fun in the big markets than the smaller ones.

I'm blanking out the thoughts on Lee right now, hoping all those reports of Yankee fans spitting and throwing beer at Lee's wife are true.

It was a great run. No one can deny that. I'm as proud as ever of those guys and hope they can continue. There's alot of optimism around here. And yes, since I added Sirius radio in my car last year, I listen to MLB network religiously and become hooked on each breaking news segment. Whose options are denied or picked up? Terrific time for us fans to wish that some of these guys end up on our teams.