Gerardo Naranjo's "I'm Gonna Explode" is an apt title.... a film about the turbulent angst that builds in all of us during our teenage years and eventually leaks out in destructive or passive-aggressive ways. For Naranjo's two young lovers, Roman (Juan Pablo Santiago) and Maru (Maria Deschamps), life is almost unbearable and they beat up a security guard, steal a gun, and hide out on the roof of Roman's wealthy father's mansion, playing games with their families below and imagining themselves against the adult world. Things do turn tragic, but Naranjo takes his time getting there, building up an elusive tone that stands as a brash examination of youth, bracketed by the indie music of Bright Eyes and a bit of Georges Delerue which adds a dimension of fatalism to the entire thing. 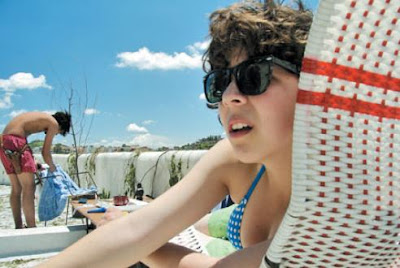 Naranjo isn't a newcomer to the indie scene. His previous feature "Drama/Mex", which I haven't seen, made some waves in the critical waters. His addition to Azazel Jacobs' wonderful "The GoodTimeskid" included acting, writing and shooting that film. Watching "I'm Gonna Explode", I get the feeling of a major emerging talent, much like I did with Cary Fukunaga and "Sin Nombre". Both are films that gently crest in and out of French new wave influences with modern sensibilities and attitudes about youth. They both look incredible as well.

It's easy to get swept up in the 'screw-you' contempt for anyone adult in "I'm Gonna Explode", but Naranjo molds Maru and Roman as deceptively smarter than that. With both sets of their families worrying in the house beneath them, they play act on the roof, Roman being the more abrupt of the two and Maru along for the ride with her exciting new boyfriend. Maru seems to understand when playtime is over, but its Roman who doesn't want it to end. As Godard said, all you need to make a movie is a girl and a gun, and Naranjo holds to that credo in true nouvelle vague fashion.