Pablo Trapero's "Lion's Den" is a unique prison picture. Formatted virtually around the hard (but equally beautiful) face of actress Martina Gusman, the film is an unrelenting portrait of a woman confined to harsh surroundings desperately clinging to a small strand of real life. That slice of real life happens to be her baby boy, who she gives birth to in prison. The 'lion's den' in question is an Argentine prison that Julia (Gusman) is sent to after an oblique and sparsely explained opening crime. Placed in an all-female ward, Julia soon finds out she's pregnant and moved to a section of the prison where the inmates roam freely, breastfeeding their children and walking them to kindergarten. The law is that the children stay with their mothers in prison until the age of four. Trying to appeal her sentence, Julia soon encounters other forces outside her control that threaten to take her child away. Detailing the squalor of the prison with an unflinching gaze and perfectly timed long takes, "Lion's Den" expresses a ferociously moving point of view, none more so than the primal emotion that emerges from Julia when her son is initially taken away from her. It's a magnificent performance from Gusman, made all the more poignant by the way Trapero documents the children playing inside the prison, swinging on the bars and disappearing behind locked doors that echo with a loud thud as if they were mingling on a playground. 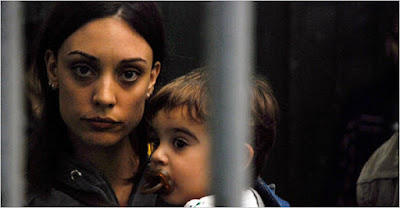 Watching "Lion's Den" just a day after seeing Lucretia Martel's masterful "The Headless Woman" makes for an interesting double bill. Both films, made by Argentine filmmakers, tackle a specific theme with brilliance and sure hands. And both films present women in peril (physical and psychological) with an unwavering sensibility that seems lost in most other films. While Martel's lead woman falls into a state of amnesia after (possibly) murdering someone, Trapero's punished woman claws and scratches with all her life, burning with the memory of her child to keep herself sane and focused on the goal of eventual release. Both women take divergent paths, yet both films analyze sections of Argentine life that rarely receive any attention. "Lion's Den" ranks very high with the prison picture as a genre (made by a man or woman) and it deserves to be seen. The most harrowing message, though, lies in the quiet scenes of the children lingering behind bars. The mother committed the crimes, but the children are paying for them.
Posted by Joe Baker