70's Bonanza: The Wrath of God 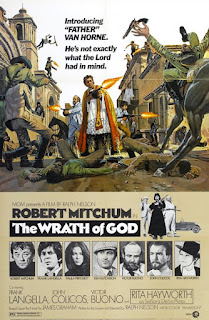 Just look at that poster. Need I say more? Robert Mitchum stars as a priest traveling through a South American country caught up in turmoil and public executions. Along the way, he meets up with an Irish hooligan (Ken Hutchison) and British gent (Victor Buono) also trying to escape the political civil war. They're snatched up and given a unique proposition. Since all three men are certainly not what they seem to be, "The Wrath of God" becomes one of the those great 70's motley-men-on-a-mission films. Their target- a villainous land owner named de la Plata-played with wide eyed insanity by Frank Langella. Yes, that Frank Langella. I know he's Italian, but nonetheless.

Directed by Ralph Nelson, who previously made "Lilies In the Field", he turns that film's Christian goodness message on its ear with "The Wrath of God". Dressed in priest's clothing, Mitchum hides some deadly skills under that robe. At times looking like he's bored with the whole thing, I wouldn't call it a great Mitchum performance, but a fun one. The real star is young Langella, tormented by a hidden secret, plagued by his do-gooder mother (Rita Hayworth!) and determined to kill any religious figure who sets foot in his town. "The Wrath of God" segues into a pseudo western action film as the trio of 'hit men' attempt to carry out their mission, and Lord do the bullets begin to fly. In the world of 70's 'B' movies, it fits in nicely between Bava's "Rabid Dogs" and "The Guns of the Navarone".
Posted by Joe Baker